Why this Is a Good Time to Remember Eugene V. Debs

Mr. Freeberg is the author of Democracy’s Prisoner: Eugene V. Debs, the Great War, and the Right to Dissent, published this summer by Harvard University Press. He is a history professor at the University of Tennessee. 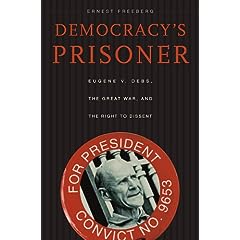 In June 1918, as American troops were entering the trenches of France, the socialist leader Eugene V. Debs gave a speech in Ohio declaring that rich men profit from wars, while poor men die in them. “You need to know,” he told his followers, “that you are fit for something better than slavery and cannon fodder.” Federal agents arrested him for violating the 1917 Espionage Act, a law used to jail hundreds of war critics during Woodrow Wilson’s crusade to “make the world safe for democracy.”

Today, when speech rights are again pressured by the demands of national security, we do well to remember the combination of forces that brought Debs to jail for speaking his mind. When Wilson called for war in April 1917, American public opinion was deeply divided, but the president and his attorney general suggested that war critics were disloyal. Unnerved by government propaganda, many citizens and scores of newspaper editors demonized the protestors, stifling debate at a time when it was desperately needed. Real threats to the national welfare existed, but were wildly exaggerated by politicians who saw partisan advantage in portraying themselves as champions of “100% Americanism.” Some used the public’s fear of radicals to stigmatize immigrants, inspiring a movement to throw up new barriers at our borders. All of this sounds familiar in our own time, as our fears once again threaten to undermine our democratic traditions.

We should not forget why Debs went to jail, but we also need to recall how he got out. Though sentenced to ten years, he served less than three, thanks to one of the largest, and perhaps least remembered, protest movements in American history. As Debs sat in jail, he provoked a broad national debate over the right to free speech in times of war, joined not only by the nation’s most important writers, reformers and legal scholars, but also by thousands of ordinary citizens. The story reminds us that the meaning of free speech is ultimately determined by us all.

When Debs entered prison in April 1919, most newspapers praised the government for silencing a man whom the Washington Post called “a public menace.” The New York Times ridiculed Debs’s claim that he had a right to speak his mind about the war, insisting that the government had a more important right to “defend itself against unbridled speech.” Not every newspaper editor felt this way. Journalists for the nation’s once vibrant radical press considered Debs’s arrest a travesty of justice—but most of their papers had long since been shut down by post office censors.

While some rejoiced to see Debs behind bars, others organized an “amnesty” movement, hoping to pressure the government to pardon Debs and his fellow “political prisoners.”  One important legacy of this protest is the creation of the American Civil Liberties Union.  The tiny group of free speech lawyers and liberal reformers raised funds to defend these prisoners, and urged the court to adopt a more expansive view of the First Amendment.

The fledgling ACLU was part of a much broader grassroots movement to free Debs, and to force the government to reconsider its civil war on dissenters. Guided by the anarchist Lucy Robins, thousands of AFL union locals debated the issue. Though few supported Debs’s socialism, many felt a patriotic duty to defend this man whom the government had branded an enemy to his country. They deluged the White House with petitions. “I do not wish to be considered anything but a Loyal American Citizen,” one ironworker wrote to President Wilson, “but when my own Government is at fault, I have the right to protest.”

Celebrities weighed in for Debs, including Charlie Chaplin, Helen Keller, Carl Sandburg and even Mae West. And thousands of ordinary citizens spoke out. The White House and the Justice Department were deluged with letters of protest. A working-class woman from Chicago, for example, told her president that “a government that will deliberately take away the inalienable rights of natural born citizens, throttle free speech, and institute espionage and intimidation systems, cannot be held in low enough contempt by its subjects.”

The Socialist Party forced a national discussion of the rights of war protestors when they ran Debs for president in 1920. In four previous campaigns for the White House, Debs had criss-crossed the country in his “Red Special” rail car. Behind bars, he had to rely on supporters to drum up votes for “Convict 9653,” a slate they called “Debs and your constitutional rights.” Almost one million Americans cast votes for Debs that November, a remarkable protest that marks the beginning of our country’s modern devotion to civil liberties.

This massive free speech campaign finally convinced the newly elected president Warren Harding to release Debs on Christmas Day, 1921, and encouraged him to call off much of the government’s often illegal and clandestine campaign against radicals. The amnesty movement marked the birth of a new form of free speech politics. In the years since Debs walked free from the Atlanta Penitentiary, wars have continued to put pressure on our speech rights, but thanks to the vigilance of free speech advocates and a series of Supreme Court rulings, the right to dissent has expanded dramatically. As we face a new round of free speech fights in our own day, we do well to remember the amnesty movement, and the way thousands of ordinary Americans spoke up for the right to speak against war.

Eugene Debs is featured in The Privilege of Voting.

If you are interested in the many exciting twists and turns that played into women winning the vote, I hope you will check out "The Privilege of Voting."

As I pondered how to create a compelling biography of two leading suffragettes, I realized that without telling the stories of other prominent women and men during the same time period, it would be impossible to convey why men yielded (at long last) to women's demand to vote.

"The Privilege of Voting" is a new and exhaustively researched historical e-mail series that portrays the many twists and turns that played into women winning the vote.

It goes behind the scenes in the lives of eight well-known women from 1912 to 1920, and reveals the sexy, shocking truth of HOW the suffragettes won the right to vote in America and England.

The women depicted include two of the most beautiful and outspoken suffragettes -- Alice Paul and Emmeline Pankhurst, along with Edith Wharton, Isadora Duncan, Alice Roosevelt, and two stunning presidential mistresses.

Eugene Debs, while still in prison, ran for president in the first year that women voted, and won over a million votes.

The sereis details the adminstrations of Theodore Roosevelt, Woodrow Wilson and Warren Harding.

There are weddings and funerals, babies in peril, damsels in distress, war, peace, broken hearts and lots of hot affairs.

The best part is it's ALL true!

Each action-packed e-mail episode takes about 10 minutes to read, so they are perfect to enjoy on coffeebreaks, or anytime.

You can subscribe to receive free twice-weekly e-mails at:

I just finished this fine biography and I savored it from page one. It is, in my opinion, an example of what a biography can be if tended by an even yet passionate hand. I am recommending this to all my progressive book-loving friends.