Mr. Pietrusza is the author of 1960—LBJ vs. JFK vs. Nixon: The Epic Campaign that Forged Three Presidencies (Union Square Press, 2008). 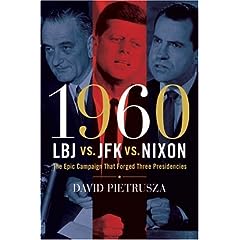 It is the perennial irony of presidential campaigns that selecting a running mate proves both so crucial to a specific campaign moment and, almost inevitably, so excruciating to the nation.

The task remains, for historians, as always, to unearth precedents. Have similar strategies transpired? Did they triumph or fail? Why, or, why not? And do today’s circumstances alter the entire equation?

We have already witnessed uncannily broad similarities between the exhausting Barack Obama-Hillary Clinton rivalry and 1960’s John F. Kennedy-Lyndon Johnson slugfest. Both races featured two United States senators. More significantly, each highlighted historic competing versions of identity politics. Senator Obama demonstrated that an African-American might viably contend for the presidency. Senator Clinton less successfully argued for a woman’s chances. In 1960, not only did Roman Catholic JFK have something to prove, so did Texan LBJ: that nearly a century following the Civil War a son of the Confederacy might capture a major party nomination.

Beyond that JFK was the handsome, charismatic (yet stylistically cool) senate outsider. LBJ was the established party leader who might have carried the day if Washington Democratic warhorses had their way. Instead, JFK took his case to the people—and LBJ took his lumps.

The parallels are pretty obvious. There are more. JFK, nomination secured, still required southern and Protestant votes in the general election. Dixie had been listing Republican, and with an Irish Papist now the Democratic standard bearer, it might topple yet further into the GOP camp. JFK recognized he needed LBJ on board to stabilize his vulnerable southern flank. Still, he had grown to resent Johnson. Worse, he had lost respect for him. Nonetheless, in the dim morning hours of JFK’s convention victory, out of grudging, calculating courtesy, he insincerely offered Johnson the second slot. Lyndon stunned Kennedy by accepting it. “Power is,” LBJ would rationalize to disoriented allies, “where power goes.”

JFK, buffeted by angry party liberals and his own significant doubts, instantly, and obviously, regretted his action—as did LBJ. Yet, it was Johnson who carried crucial Texas for JFK—and may have saved Louisiana and South Carolina for him as well. This unlikely, awkward gesture, ultimately carried both men to the White House.

In 2008 Barack Obama recoiled from the super-ticket option, opting instead for the original Kennedy model, one that only fate delivered JFK from: a safe, sane, boring, pointless selection. In 1960 JFK had originally offered the second slot to his lackluster former rival, Missouri Senator Stuart Symington—a Scrantonless Joe Biden. That same year Richard Nixon also opted for terminal blandness, selecting patrician United Nations ambassador (and former Massachusetts United States senator) Henry Cabot Lodge as his running mate. Nixon (at least that year), nonetheless, recognized the value of super-tickets. His first choice had been upstart New York governor Nelson Rockefeller, who might very well have delivered the Empire State’s 45 electoral votes to the GOP, but the obstreperously liberal Rocky emphatically ruled himself out.

The McCain-Palin 2008 phenomenon seems without precedent or parallel: a super-ticket featuring a running mate hitherto virtually unknown to the electoral mass market. Yet, there remains one starling similarity: to Dwight Eisenhower’s 1952 selection of 39-year old United States Senator Richard Nixon. Myriad differences, of course, exist between the Nixon and Sarah Palin picks, but one significant similarity emerges. Almost immediately, unprecedented negative publicity endangered Nixon’s place on the ticket, indeed, his very career. Regarding Nixon, Ike proved immeasurably less supportive than John McCain did regarding Governor Palin, but in both instances the embattled youthful veep candidates needed to present their cases to the public—forcefully and fast. Nixon’s situation (gossamer-thin, but highly damaging, allegations of a fat-cat-funded personal “slush fund”) necessitated his famed September 1952 “Checkers speech”—dramatically delivered before 58 million viewers, until then, television’s largest audience.

In thirty minutes Nixon laid bare his entire financial structure—his assets, his debts, his GI term life insurance policy, his 1950 Oldsmobile. It was not an impressive or lucrative balance sheet. He had certainly not enriched himself at the public trough, and he had not—“not one cent”—used the fund for personal expenses.

And with a dig at Truman administration mink coat-driven scandals, he added, “Pat and I have the satisfaction that every dime that we’ve got is honestly ours. I should say this—that Pat doesn’t have a mink coat. But she does have a respectable Republican cloth coat. And I always tell her that she’d look good in anything.”

Nixon revealed one gift his family had received: “It was a little cocker spaniel dog in a crate that he sent all the way from Texas. Black and white spotted. And our little girl—Trisha, the 6-year-old—named it Checkers. And you know they, like all kids, love the dog and I just want to say this right now, that regardless of what they say about it, we’re gonna keep it.”

Nixon, nonetheless, believed he had failed, sobbing when he had finished, but sobbing sympathetically with him was the TV crew around him—and the nation. “The telephone,” Nixon television advisor Ted Rogers shouted to Nixon as he left the stage, “is lit up like a Christmas tree.”

Nixon, like Sarah Palin at 2008’s GOP convention, not only rallied the Republican base around him, he shocked a hostile political and journalistic establishment by drawing Middle America to his side.

It had to come to this:an inspired and responsible or an uninspired and irresponsible choice of a VP candidate for the whole issue to be,hopefully, tackled in profundis or at least widely and openly by the American public. As perceived by a non American the choice of a VP candidate seems to be the exclusive, personal ,sole and whimsical prerogative of the Presidential candidate. How does that: the choice of he or she who is only a heart beat away from becoming President is so selected??? How does that square with democratic standards and/or democratic pretensions ? Broadly looking at it ;it is even worse, less democratic?,than hereditary succession to office and power . In the latter case the "heir" is , at least, known by name, capabilities, or absence thereof and general orientation.

And I'm especially thankful that I didn't have to wade through HNN's usual leftwing morass to find a few chestnuts of wisdom.

"Embattled candidate who needs to present her case to the public forcefully and fast? What utter nonsense! Gov. Sarah Palin has been accepted with enthusiasm everywhere, and the McCain-Palin ticket has forged into the lead, in no small part on the strength of "her case." Don't you wish she was an "embattled Veep candidate!"