The Forgotten Struggle for Civil Rights in the North: An Interview with Thomas Sugrue

Mr. Liebers is an HNN intern. He conducted the following interview by email. 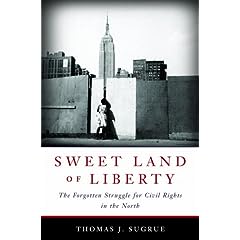 Thomas J. Sugrue is Edmund J. and Louise W. Kahn Professor of History and Sociology at the University of Pennsylvania. He specializes in American politics, urban history and the history of race in America. Sugrue’s first book, The Origins of the Urban Crisis, was awarded the Bancroft Prize in American History and the President’s Book Award of the Social Science History Association. His latest book is Sweet Land of Liberty: The Forgotten Struggle for Civil Rights in the North.

You suggest that the interplay between northern and southern Civil Rights movements deserves its own study.  With so many overlapping historical actors and themes, is the distinction still useful?

Martin Luther King, Jr. regularly described the black freedom struggle as national, not regional in scope. I am part of a generation of historians who challenge the framework of "southern exceptionalism" that leads us to overlook the similarities between Jim Crow north and south of the Mason-Dixon Line. Sweet Land of Liberty is a step toward an integrated national history of civil rights. It is neither the first nor the last word on this topic. I build on the cutting-edge work of revisionist southern historians who emphasize the "long civil rights movement," and on cutting-edge northern historians who have begun to narrate the history of the black freedom struggles in places like New York, Detroit, and Philadelphia. Eventually, some audacious scholar--it won't be me!--will write a book that synthesizes the histories of civil rights north, south, and west.

In Sweet Land of Liberty, I do not overlook regional differences, the most significant being that most African Americans in the south did not have the right to vote between the late nineteenth century and the passage of the Voting Rights Act of 1965. Northern activists, beginning in the 1930s, came to see the power of the vote as an indispensable tool for racial equality. But in many respects, everyday life for blacks was similar in the North and South. Segregation in public accommodations--restaurants, hotels, swimming pools, movie theaters, and amusement parks--was commonplace in the north through the 1940s, and in some places, the 1950s and 1960s.

In most of the north, unlike in the south, racially separate schools were not mandated by law. But school segregation was widespread in the north and can't simply be described by the misleading term "de facto." Many northern school districts maintained officially separate schools or cordoned off blacks in their own classrooms, or redrew school attendance zones when black families began to move in. Northern and southern civil rights activists were also part of organizational networks. Our conventional histories of the civil rights movement focus on nonviolent protests in the South like the lunch counter sit-ins of 1960 and 1961. But to borrow a term from the great civil rights historian, Charles Payne, southern activists were part of an "organizing tradition" that was rooted in the North. In the 1940s, northern activists sat-in at segregated restaurants, picketed white-only pools and amusement parks, and boycotted separate, unequal schools. Later, many of those same northern activists moved south and shared their strategies and tactics--the lessons learned from decades of northern protest--with their southern counterparts.

The book provides an astoundingly lucid discussion of the complexity of the northern Civil Rights movement.  In part this is what makes the argument so powerful.  A. Philip Randolph's support of the Socialist Party (and the struggles between them), "social gospel" liberationist ecumenical organizations, friction between the Congress on Racial Equality and the Nation of Islam (and even within CORE), and Catholic Worker activity in the movement, all point towards a surprisingly broad and multipart political movement.  These different prongs increased numbers, but they did not always work harmoniously together— do you think there was a drawback to this, or were the goals sufficiently unified?

The civil rights struggle was most effective when activists forged unlikely coalitions. During the late 1930s and World War II, for example, an ideologically diverse coalition of activists (including Social Gospel Protestants, secular Jews, black churchwomen, industrial unionists, and members of the NAACP, the Urban League, the Workers' Defense League, the Willkie wing of the Republican Party, left-leaning Democrats, and the Communist Party) found themselves working together to push for anti-discrimination laws. Their efforts were uphill, but they began to bear fruit at the state and local levels. But civil rights coalitions were fragile. Ideological disputes often pitted activists against each other. The Cold War was especially divisive in many northern civil rights groups--and led to fracturing, mutual recriminations, and ideological squabbling over issues that often had little to do with the goals of racial equality.

But political change did not only come from coalition-building. In periods when the movement was fractious and fractured, it could still be effective. For example, in the momentous year of 1963, politicians, activists, and pundits described a nationwide "Negro revolt."  A wide range of activists--nonviolent and violent, accommodationist and disruptive, integrationist and separatist, northern and southern--engaged in protests and agitation and demanded immediate change. They disagreed on many fundamental issues and seldom coordinated their protests, but shared a growing impatience with the status quo. Widespread protest and the threat of disorder, in both north and south, forced the Kennedy administration, after more than two years of hesitation, to take calls for civil rights legislation seriously.

You mention Gunnar Myrdal's An American Dilemma (1944) and its contention that race is "at the heart of the American problem."   Is it bound to remain so?  Also, how do you respond to the critique that such questions inadvertently distract attention from class issues in American politics (privileging of race over class as an important framework for inquiry)?

I see questions of racial and economic inequality as fundamentally intertwined. Myrdal argued that the eradication of racial inequality required changing the hearts and minds of Americans but he downplayed the role that economic exploitation played in perpetuating racial inequality. Many activists in the postwar years took Myrdal's argument seriously. They worked through the mass media, through churches, and through the social sciences to persuade white Americans that blacks were their equals. By the 1960s, white racial attitudes had improved dramatically. Whites professed to be color blind. They told pollsters and survey researchers that they would accept black neighbors and black classmates for their children.

But changing racial discourse and imagery did not automatically translate into changes in everyday life. Workplaces, schools, and neighborhoods remained intensely separate and unequal, despite changes in white attitudes. In practice--right up to the present day--blacks and whites in the north continue to live separate and unequal lives. The most segregated metropolitan areas in the United States today are almost all in the Northeast and Midwest. The states with the most racially segregated public schools are all outside of the old Confederacy. White Northerners may have believed that they were more "advanced" or "progressive" on issues of race, but movement toward racial equality came very slowly. And it came mostly because of the pressure that black activists put on the political system.

As a historian, you have a great talent in bringing together structural, political analysis and the stories of individuals working within and pushing against those forces.   That being said, how would you describe yourself as a historian?  You use a lot of traditional kinds of sources, but it seems open up to really broad kinds of analyses that historians generally shy away from.

I am very interdisciplinary in my approach to history. Social scientists tend to ask good questions, but often offer answers that are too sweeping and general. Historians tend to get lost in the minutae of their evidence and lose sight of the big picture. Like the best sociologists or political scientists, I try to engage important questions. Like the best historians, I try to research deeply. My goal is to provide rigorous and persuasive answers that are grounded in my reading of the sources.

Did anything particularly surprising to you come up in your research for Sweet Land of Liberty?

No researcher is doing a good job if he or she isn't surprised a lot. I was surprised by the extent of segregation in public accommodations in the North. I was surprised by the pervasiveness of black-led protests against unequal education. I knew very little about the role that grassroots activists in the North (especially black mothers) played in redefining the meaning of the landmark Brown v. Board of Education decision. Most litigators and activists--and the Supreme Court itself--did not imagine that Brown would matter in the North. The conventional story that historians tell is one of massive resistance to Brown in the South and indifference to it in the North. But northern activists in suburbs and big cities alike brought the issue of separate, unequal education to the forefront of the movement.

Another surprise: Racial integrationists reached their peak of influence in the late 1960s and early 1970s. The story that we usually tell is one of black power supplanting integrationism. The tired declension narrative--that backlash and a divisive identity politics snuffed out civil rights activism--doesn't hold up. Advocates of integration and black power co-existed in the 1960s and both grew stronger, even as cities were ravaged by riots and racial tension. The history of black power, in particular, was full of surprises, perhaps most of all the strange alliances between many black power activists and mainstream (Democratic and, even more momentously, Republican) politicians.

Some of the material in Sweet Land of Liberty will be well-known to historians of twentieth-century America; but much of it will be unfamiliar to all but a handful of specialists. My primary task in writing this book was to synthesize the familiar and unfamiliar--and in the process to open up new ways of thinking about modern America. I hope I have succeeded.

I think you're probably right in this particular case, but my feeling is that Sugrue wanted to focus on the organized aspects of the Civil Rights movement, and the records probably just are not as good outside of the big cities. Certainly there is more to the story to be told, but Sugrue gives a high quality schematic description of the different groups (largely based in big cities) and their efforts to stand up to civil rights injustices.

Your point is interesting because it calls into question the North-South distinction which was part of one of my questions to Sugrue. There are parts of the North that "feel" as thought they're more Southern than Northern by many of criteria we would use to categorize the two. There are parts of Ohio, New York and even Connecticut, that are largely agricultural in which you wouldn't be surprised to see confederate flags flying.

Sugrue writes (emails): "Segregation in public accommodations--restaurants, hotels, ...--was commonplace in the north through the 1940s, and in some places, the 1950s and 1960s." Too optimistic. In many sundown towns in the North, segregation in public accommodations still occurred in the 1970s! (The ! is because such occurrences were rare in, say, Mississippi by 1/1/1970.) And today, we have the ironic opposite situation: the motel on the highway in, say, Calhoun County, IL, a "sundown county" north of St. Louis, will accept a black family overnight, but they can spend the night NOWHERE else in the county.