Going Back to the Future—Shanghai Style

Mr. Wasserstrom is a Professor of History at UC Irvine and the author, most recently, of Global Shanghai, 1850-2010: A History in Fragments (published in December 2008 by Routledge). 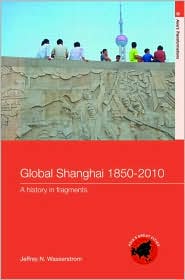 The last few decades have seen a dramatic change in the way historians work.  We treat a broader range of topics, write about a wider spectrum of people, look to a larger number of neighboring disciplines for inspiration, and turn to a greater variety of texts for evidence than our predecessors.  This has been a great thing in many ways, but it can make it hard sometimes to specify what exactly members of our guild now have in common—besides an interest in the past.  And sometimes even this one black-and-white area turns into a gray zone.  When we craft studies that focus on the very recent past, the present, or, worst of all, nod to future—as I do in the very title of my latest book, Global Shanghai, 1850-2010.

I guess, to quote a line from the sort of pop culture text to which most historians of even a few decades back wouldn’t have dreamt of alluding, I’ve “got some ’splaining to do.”  Especially since in the past, when asked to make predictions about what will happen next in China, I’ve sometimes avoided answering by giving an excuse that’s popular in the guild.  I’ve said that speculating about things to come is something that we just don’t do, and that is better left to political scientists and the authors of works of science fiction.

One part of my explanation is that a book that inspired me as I was trying to figure out how to come to terms with Shanghai was Mike Davis’s City of Quartz: Excavating the Future in Los Angeles.  Not only does it have a title that includes the word “future,” but this forward-looking term links up with a central claim of the book: that a full history of a metropolis must deal with how the place is represented as well as how lives are lived within its borders.  And that, in the case of L.A., that means coming to terms with utopian and dystopian visions of things to come, including fictional works such as Blade Runner (set in Los Angeles in 2019).  I felt a similar argument could be made for Shanghai—and not just because visitors now say Pudong looks like a set from Blade Runner.

Here are five other things that help explain my title—and approach:

The book’s working title used to be Global Shanghai, 1850-2000.  My plan was to finish it around the turn of the millennium, meaning that, while it would have included some forward-looking passages, its title would have ended at the present.  As it happened, it took longer than I expected to finish the book and, in 2005, an Australian friend joked, when introducing a talk I was giving at his university, that I might consider calling it by the name it now has—as using 2010 instead of 2000 would ensure that it kept a generally contemporary sound when it was actually published.  I thought this a case of wise words being spoken in jest, since the phrase immediately had a nice ring to it for me and I saw how using 2010 as an endpoint could be wonderfully appropriate (more on that below).  So I changed the title, not knowing initially if I’d finish the book by 2010 or not—and give a special word of thanks to the friend, who has probably long since forgotten the incident, in the Acknowledgments.

Given how hard it is for academics to get the attention of general readers (and this book is intended for them as well as for specialists), I thought that it might be good for it to have at least one “man bites dog” news angle. In this case, the tagline could be: “Historian of Chinese metropolis doesn’t just look backwards, but also does some crystal ball-gazing—details at 11.”

Visits I’d made to Shanghai at the end of the last century and the start of this one had convinced me that it had become a metropolis inordinately focused on both what it used to be and what it might be down the road.  It was a place that reveled in having rocket-like skyscrapers on one side of its river, as well as the world’s first superfast Magnetic levitation train, while on the other side of the waterway one were cafés and bars that played to nostalgia for the fabled treaty port that was called the “Paris of the East” in its heyday circa 1930.  It even has a major museum that contains a giant scale model of the city, not as it currently is, but as it will be in 2020—though the basement of this same site is a replica of a Shanghai street in treaty port times.

As I wrote the chapters of Global Shanghai dealing with the past, I realized that while there is much that is novel about the current obsession with the city’s future and its futuristic qualities, neither an obsession with what will happen to the city next nor a sense that it is excitingly or worrisomely ahead of the urban curve is new.  Shanghai has long had the ability to inspire predictions: the North China Herald, the city’s earliest newspaper and the subject of one of the book’s chapters, began to make self-confident predictions of a coming era of greatness in its very first issue.  And a century before Paris Hilton arrived in 2007 and said, as many other Western visitors have recently, that Shanghai “looks like the future,” Chinese visitors to the treaty port had thought that they had traveled forward in time when they encountered advanced transportation and lighting technologies of there that they had never seen in their hometowns and villages.

The build-up to the World Expo scheduled for 2010 made that year a natural moment toward which to move in the book.  Anticipation of the Expo, which is being touted as “China’s First World’s Fair,” has contributed to the futuristic nature of the city—and not just because local countdown clocks remind passersby of how little time is left until the event begins on May Day of 2010.  The Expo and Maglev train, for example, are linked.  The first Maglev line was introduced when Shanghai was gearing up to bid to host the World’s Fair, and an extension is being built that will allow tourists to be whisked straight from the airport to the Expo grounds on this theme-park-ride-like mode of conveyance.

A final thing to note is that ending the book in 2010 gives added meaning to starting in 1850.  That was a year when one of the big international news stories was the lead-up to the Crystal Palace Exhibition.  Often called the “First World’s Fair,” that 1851 London event had the goal of giving visitors an increased appreciation of the international dimensions of the present and the technological possibilities of the future.  I don’t need a crystal ball to predict that when the Shanghai Expo opens, its backers will hope it provides the same thing.