Mr. Brown is Executive Director of the American Social History Project/Center for Media and Learning and Professor of History at the City University of New York Graduate Center.

A few years ago, Art Spiegelman, the author of the iconic graphic account of memory and the Holocaust, Maus, explained his wariness about getting “caught in the sway of the totally ephemeral possibilities of political cartooning." The problem, he explained in an October 2004 Mother Jones interview (marking the publication of his 9/11 visual memoir, In the Shadow of No Towers), “is that political cartoons have the shelf life of yogurt, at best. Even if you’re seconds ahead of your time, those seconds come a few seconds later, and then you’re reduced to just being a footnote in a history book by having a cute illustration to help illustrate for recalcitrant high school students what the Teapot Dome scandal actually was. As a result, it’s not exactly where I’d like to focus my immediate energies."

As a historian, I suppose aspiring to be a footnote is part of the job description. In any case, the hazards of topicality were not on my mind when I decided to embark on a new graphic project on March 20, 2003. That was the day the U.S. invasion of Iraq began and, like many of my colleagues and friends, I found myself casting about trying to figure out how I should personally respond to the Bush-Cheney administration’s disastrous war of choice. With widespread press acquiescence, epitomized in the work of even previously skeptical mainstream editorial cartoonists, and with the availability of the Web as an inexpensive alternative platform, my choice was to create a weekly single-panel graphic blog called, with a bow to the Talking Heads’ 1979 song, “Life during Wartime." I certainly was not concerned about the “shelf life" of this project; I hoped this venture (which I assumed, based on the military supremacy of the United States, would be short-lived) would visually chronicle and comment on the war and its impact—particularly its effect on the “homefront" (see, for example, this April 20, 2003 installment)—using a medium rarely embraced by historians (abetted by my own checkered shadow career as a cartoonist, illustrator, and designer).

Almost five years and more than 320 installments later, I’m still issuing my weekly online visual commentaries (delivered to subscribers via e-mail and archived on my own website and on the "Historians Against the War" site). With the fate of Iraq and U.S. involvement still unresolved (the prognostications of the press to the contrary notwithstanding) and our “engagement" in Afghanistan (where, as Pat Buchanan recently quipped, “empires go to die") threatening to expand, not to mention the gruesome panoply of other Bush-bequeathed foreign and domestic crises confronting us, I’m afraid I know what I’ll be doing on a weekly basis for some time yet. But as we contemplate the imminent departure of the Bush-Cheney administration, this seems an appropriate time to briefly reflect on the last (almost) eight years of work. 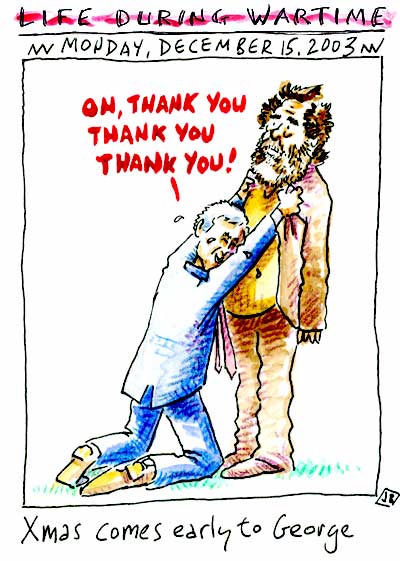 If I’ve accomplished nothing else I believe I can say that at least I’ve learned to draw George W. Bush. Looking back, I am a bit aghast at how poorly I drew him at the start. I’ve been drawing U.S. presidents since the tender age of seventeen (etching LBJ’s face on paper mimeograph stencils) and perhaps too quickly mastered a shorthand that was one part observation to two parts formula. For the first year of “Life during Wartime," my efforts were even tentative in the formula department, in part because I thought the war would be short and consequently I tended to emphasize the conceptual over the representational in the drawings. But as the war and its carnage intensified, and the effects of the administration’s incompetence, neglect, and mendacity became painfully apparent at home, I found myself including Bush and his compatriots in the cartoons—and, in time, also moved from a sketchier, quickly rendered style to one that incorporated more detail and denser compositions (with occasional detours to comic-strip narrative).

So, more and more, Bush’s features came to dominate my pictures. While I can’t say that my approach to caricature comes anywhere near the enthusiastically-rendered facial contortions that, in Dorian Gray fashion, embody Bush’s policies as delineated in the work of such masters as Steve Brodner in the U.S. and Steve Bell in the U.K., I nonetheless have contemplated the presidential visage with more intensity than is probably healthy for me. And, despite his eminently exaggerate-able features and expressions, I’ve found Bush a challenge and, even when getting the physical details right, quite elusive.

Many cartoonists mastered Richard Nixon’s face long before his presidency, but only a handful—most distinctively Edward Sorel—caught the demons lurking behind his widespaced, thick-lashed, darting eyes. Whatever one may say about Nixon’s presidency, part of our continuing fascination with him is the amalgam of calculation, intelligence, cruelty, and self-loathing that visibly manifested itself in such telltale signs as his gash of a smile and glistening upper lip. George W. Bush, on the other hand, offers mobile expressions that seem to be transparent in that they betray impatience, displeasure, discomfort, confusion, not to mention disingenuousness, in a myriad of public situations. But this repertoire of expressions is filtered through an overweaning self-regard that can lead you astray: to draw Bush well does not mean you actually capture him because entitlement and privilege are traits that don’t manifest themselves somatically.

There are times I think I’ve come close to rendering the essential Bush, but more often, even when I know I have distorted his features in such a way that they are more accurate than his own countenance and also embody the particular blunder or malfeasance about which I’m commenting, as far as I’m concern he’s still not really there. In contrast, Cheney’s a piece of cake. 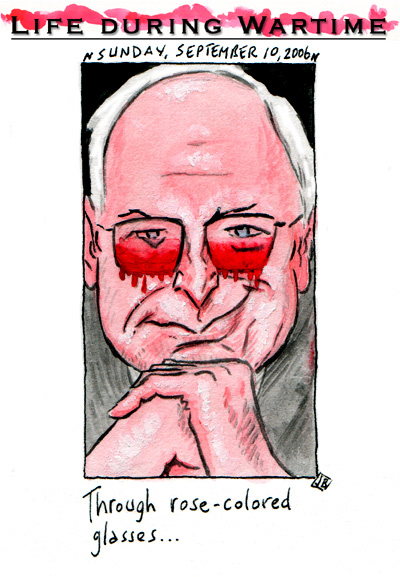 Inevitably, pace our 43rd president, one looks back on these years with some regret. Like most bloggers, I would have liked to reach more people—although, as a member of the generation who matured before the Internet age, my expectations about circulation were far surpassed by the startling viral reach of the Web (in my case assisted by occasional appearances on such well-trod sites as MotherJones.com, Guardian.co.uk, and HNN. While I may have wished some drawings were rendered better—or at least closer to what was in my mind’s eye—there were none I regret doing. I don’t even regret the repetition of blood as metaphor and as reality, or my one gleeful lapse into scatology. Indeed, on reflection, I only wish I had been more outrageous. 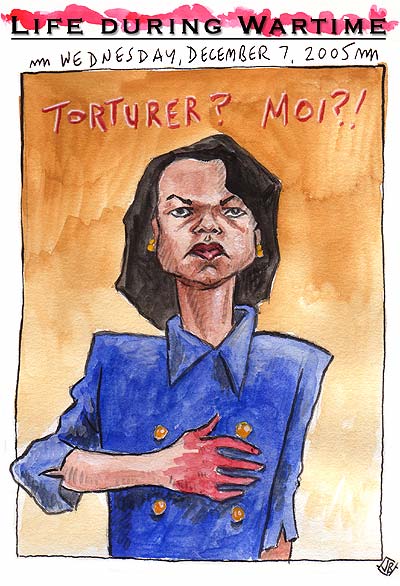 I do wish I had found more opportunities to balance my response to immediate events with a historical perspective. Or, when I did, to more often move beyond predictable analogies, such as several drawings that referenced the ghosts of administrations past. Nevertheless, as we bid an unfond farewell to this administration, I’m working on a series of “Transition Portraits" that offer a historical evaluation of the last eight years. And, as we move into the Obama era, I remain all too aware that George W. Bush’s ghost, and I’m sure occasionally his face, will continue to haunt my drawings . . . not to mention all of our lives. 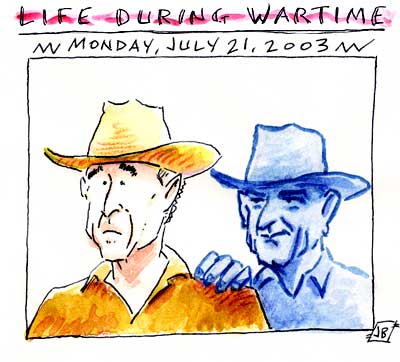 Drawing and coloring Bush and his henchmen in this manner may be the only images of him I can tolerate.
Thank you for capturing his facade and falsehoods so irreverently.