Mr. DeLay, Assistant Professor of History, University of Colorado, Boulder, is the author of War of a Thousand Deserts: Indian Raids and the U.S.-Mexican War (2008). 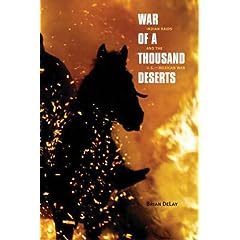 A hot and humid summer day in St. Louis, 1847. Church bells pealing, flags lolling in the heavy summer air, the city had assembled to toast the arrival of Capt. Alexander Doniphan and his band of Missouri volunteers from the Mexican War. A hush came over the massive crowd as Senator Thomas Hart Benton, the keynote speaker, took to the stage. The senator invoked the remarkable triumphs of the “American Xenophon” and his hardscrabble men. Benton’s gravely voice boomed as he recounted the"bloodless conquest" of New Mexico, a Mexican province; the swift and unaccountably lopsided conquest of Chihuahua; and the daring march east to rendezvous with General Zachary Taylor and his army.

The senator told these familiar stories with relish. But he devoted far more time to another story, one that many in the audience would have known but that we have since forgotten. In May of 1847, a detachment of Doniphan’s men led by Captain John Reid rode into the town of Parras in the Mexican state of Coahuila and found that it had just been attacked by Comanche Indians. Moved to pity by the townspeople’s lament, Reid and his soldiers pursued the raiders, killing scores and redeeming several hundred horses and eighteen captive women and children.

“Here presents an episode of a novel, extraordinary, and romantic kind,” Benton explained. “Americans chastising savages for plundering people who they themselves came to conquer, and forcing the restitution of captives and of plundered property. A strange story this to tell in Europe, where backwoods character, western character, is not yet completely known.” The senator held up a piece of paper; a letter of thanks from Parras’s grateful mayor praising Reid’s “noble soul,” and his determination to defend “Christians and civilized beings against the rage and brutality of savages.” “This is a trophy of a new kind in war,” Benton informed the jubilant crowd, “won by thirty Missourians, and worthy to be held up to the admiration of Christendom. The long march from Chihuahua to Monterrey, was made more in the character of protection and deliverance than of conquest and invasion.”

For more than a 150 years, the tale of the U.S.-Mexican War (1846-1848) has been one about states. Whether Mexicans or Americans, writing in the 1840s or the 2000s, historians have crafted narratives of the war with virtually no conceptual space for non-state actors like the men who attacked Parras. Thus while few in Benton’s audience would have puzzled over his preoccupation with Indian raiders, these actors are invisible or at best trivial in the historiographies on the U.S.-Mexican War, Manifest Destiny, U.S. westward expansion, and Mexico’s own early national period.

Drawing upon archives, periodicals, and scholarship from both sides of the Rio Grande, my book War of a Thousand Deserts reframes the story of the U.S.-Mexican War by putting Indians at its center.

In miniature, the story goes like this. In the early 1830s Comanches, Kiowas, Apaches, Navajos, and others abandoned imperfect but workable peace agreements they had maintained with northern Mexicans (and their Spanish forbears) since the late eighteenth century. Men from these Indian communities began attacking Mexican ranches and towns, killing and capturing the people they found there and stealing or destroying the Mexicans’ animals and property. When able, Mexicans responded by doing the same to their indigenous enemies. The conflicts escalated through the 1830s and 1840s, until much of the northern third of Mexico had been transformed into a vast theater of hatred, terror, and staggering loss for independent Indians and Mexicans alike. By the eve of the U.S. invasion these varied feuds spanned all or parts of nine states. They had claimed thousands of Mexican and Indian lives, scarred tens of thousands more, ruined critical sectors of northern Mexico’s economy, stalled its demographic growth, and depopulated much of its countryside—turning once-thriving settlements into ghostly “deserts.”

With deserts multiplying throughout the north, the region’s beleaguered residents began asking basic questions: Who was a Mexican? What did Mexicans owe local, state, and national governments and what did these governments owe them? What did Mexicans owe each other? These remained open questions throughout the 1830s and 1840s, and fierce disagreements, even armed rebellions, failed to settle them. The violence ate away at fragile connections binding Mexicans to one another at local, state, regional, and national levels, and, by 1846, northerners found themselves divided, exhausted, and embittered just in time to face another, very different kind of invasion.

Politicians in the United States took a keen interest in Mexico’s trouble with independent Indians, and like their Mexican counterparts, they came to use the word desert to describe much of northern Mexico. But in American mouths the term became an indictment rather than a lament. When they looked at abandoned homes and villages, Americans saw perversion and opportunity: perversion because Mexican settlers seemed to be reversing the arc of history by falling back before savages, and opportunity because, characteristically, Americans thought they could do better. Throughout the late 1830s and early 1840s, editors, diplomats, congressmen, and administration officials invoked Mexicans’ manifest inability to control Indians in order to denigrate Mexico’s claims to its northern territories, first in Texas and, later, across the whole of the Mexican north.

These fateful attitudes reached their logical conclusion in 1846 and 1847, when the United States invaded Mexico and exploited the tensions and tragedies of the ongoing Indian war to more easily conquer the north and, critically, to discourage insurgency or guerrilla war. Finally, as with Benton and his “trophy,” the history and ongoing reality of Indian raids allowed the United States to style the dismemberment of Mexico as an act of salvation. Americans had come to conquer not Mexico, but a desert -- to defeat barbarians and redeem the Mexican north from what they saw as the Mexicans’ neglect.

Indians mattered. Pursuing their own varied and shifting goals, Indian peoples living above the Rio Grande remade the ground upon which Mexico and the United States would compete. Neither the lopsided course of the U.S.-Mexican War, nor the astonishing fact that it ended with Mexico losing half its national territory, make sense in the absence of these nonstate actors. Thus the story of the war has to be something more than a story about states. And it would be insufficient merely to concede that Indian raids affected the international contest. What’s called for is a new narrative, one that takes the economic and political context of Indian raiding as seriously as the economic and political contexts of U.S. expansion and the weakness of the Mexican state. This is what War of a Thousand Deserts tries to do, devoting equal attention to indigenous polities and the nation-states surrounding them, and presenting an integrated narrative of their colliding histories. A “strange story this to tell,” but one that is at once messier, more contingent, and, I hope, more compelling in the end.

I am getting through "War of a Thousand Deserts," with special interest in the sections that deal with New Mexico and elsewhere in Rio Grande country. It is a fascinating book, well researched, well documented and better yestr, very well written. It is disturbing of my schedule that I cannot put it down.