Irish and Black Americans: Have the Parallel Lines Finally Met?

Mr. Fleming is a former president of the Society of American Historians . His four grandparents were born in Ireland. He was the consultant and a principal writer of The Irish-American Chronicle, a just published history of the Irish in the United States 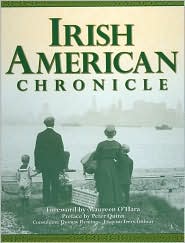 On this St. Patrick’s Day, with a black president in the White House, it is interesting – and maybe even somewhat inspiring – to look back on the way the Irish-American and African-American stories have coursed through our history on parallel lines, each struggling against terrific prejudices and slanders.

In America, the blacks endured 250 years of slavery which persuaded many people, even those like Thomas Jefferson who wished them well, that they were a subhuman species.  In Ireland, the Irish endured an even longer ordeal of English oppression, exploitation and ridicule that left them a defeated demoralized people. The ultimate blow to their self respect was the Great Famine of 1847-1851, which saw a million and a half wretched men, women and children starve to death in fields and ditches while the English feasted on tons of wheat and meat exported from English-owned Irish farms.

Another million and half Irish fled to America. In a country that was largely Protestant, their Roman Catholic religion made these penniless refugees as welcome as a recurrence of the bubonic plague. A stunning 1,107,34 staggered ashore in New York alone during those four terrible years. On the lower East Side, one eyewitness described them jammed into “the oldest and most rickety wooden buildings,” soon called “tenements.”

There were no toilets or running water in these four-story structures.  which often housed as many as 250 people. Water came from a pump in the yard, only a few yards from one or two seldom emptied  privies. Disease was rampant. Infant mortality was 25 percent. From 1849-59, 85 percent of the foreign born admitted to Bellevue Hospital were Irish. The situation in Philadelphia, Boston and other cities were no different. In one Boston ward, the average life expectancy was 5 years.

Irish gangs were everywhere. “A well dressed man venturing into their districts was commonly set upon and murdered or robbed or both before he had gone a block,” one New York observer wrote. Police patrolled their neighborhoods only in groups. Fifty-five percent of those arrested in New York were Irish.

A political party, the Know-Nothings, sprang up with a program of purging the nation of these newcomers. In 1854 they elected six state governors and seventy five congressmen and in 1856 won 25 percent of the presidential vote. “The Negro is black outside,” they shouted. “The Irishman is black inside.” A Boston company advertised “Know-Nothing Soap” --  guaranteed to cleanse the native born of Irish stench.

A cartoon portrayed an African American woman telling her children to stop playing in “dat mud! First ting you know you’ll be took for Irish chil’en!” Newspaper ads for jobs bluntly stated: “No Irish need apply.”A Chicago Post editorial summed up Anglo-Saxon detestation. “Scratch a convict or a pauper and the chances are you tickle the skin of an Irish Catholic!”

Battered by such loathing, many Irish thought their only hope was migration to the far west, where they might create a more or less separate nation. But the westward movement never caught on. The majority of the Irish saw that America’s free society gave them an opportunity they had never experienced in Ireland. Soon an Irish poet was telling his friends and relations:

I tell ye not to leave the city
Because ye know t’would be a pity
To see men digging farms and doating
Who should be in the city voting.

The Irish joined the Democratic Party and formed intricate local organizations (mistakenly called machines) that started electing mayors and  councilmen in New York, Boston, Chicago and other cities. New York had the most famous organization, Tammany Hall, named after a mythical Indian chief. Their unspoken motto was: Us against Them.The elected Irish appointed fellow Irish to jobs in the police and fire departments and in prisons and hospitals, beginning their rise from the lower to the middle class.

Tens ofthousands of other Irish fought the evil undertow of slum life with hard work in the private sector. Almost all toiled as laborers or servants. The men built America’s canals and railroads and laid its sewers, the women scrubbed the floors and washed the dishes of the rich. Others turned to the theater and sports. By 1900, the Irish had won wide acceptance in both fields

In those same years, blacks, free of slavery’s shackles, were struggling against similar prejudice and something even worse -- segregation and the loss of the right to vote in the southern states. But leaders like Booker T. Washington helped them find self respect and hope in hard work and professional accomplishments in spite of these barriers. Like the Irish, blacks also began turning to the theater and sports where they won acceptance and distinction, in spite of continued segregation in the sports world.

In the early 20th Century, even as the Irish elected senators and congressmen and achieved  affluence in banking, transportation and similar fields, there were unexpected blows. One of the most painful was the rejection of Al Smith when he won the Democratic nomination for president in1928. In spite of his well-earned reputation as a progressive governor of New York, who had helped to ban child labor and win better working conditions in factories, Smith was savagely repudiated by the voters in an overwhelming majority of states because he was an Irish Catholic. But the Irish refused to lose faith in the American idea. Equally important, they jettisoned Tammany’s Us against Them stance and learned to work with other ethnic groups who had also experienced prejudice.  Thirty-two years later, John F. Kennedy was elected president and prejudice against the Irish became history.

Black Americans, meanwhile, were buoyed by President Harry Truman’s 1948 integration of the armed forces and the almost simultaneous desegregation of the ranks of professional baseball, football and basketball. The blacks’ rise in these fields and in the theater were remarkably similar to Irish-American gains in the previous century.  President Lyndon Johnson pushed landmark civil rights legislation through Congress in 1964. But blacks  experienced a crushing disappointment when Martin Luther King spoke in America’s streets and on its  television screens in the mid-1960s, changing both white and black hearts and minds -- only to be cut down by an assassin’s bullet in 1968.

Like the Irish after Al Smith’s repudiation, King’s disciples  remained committed to the American system of free elections. They too learned to work with people of other races and ethnic backgrounds. It was no accident that one of the first Democrats to endorse Barack Obama for president was Senator Teddy Kennedy. He was seconded by John F. Kennedy’s daughter, Caroline. They were testifying to Irish-Americans’ memory of—and detestation for—prejudice in American politics.

With Barack Obama in the White House, will prejudice against blacks also become history? It will not disappear overnight. But a solid majority of the 40 million Americans of Irish descent – and even more millions of Americans from other ethnic groups  – want to make that change happen as soon as possible.

So we have here an entire essay on the position of Irish Americans vis-a-vis blacks, with not one mention of the Irish riots against blacks, the forcing of blacks out of such occupations as draymen and wharf workers, the entire Nadir of race relations! Irish and African Americans were on more of a collision course for decades than a parallel development. Eventually, as the title of Noel Ignatius's interesting book says, the Irish became white, while blacks -- duh -- never did. It's not easy to tap-dance around an elephant and never notice the beast!

It is hard to believe a historian would write: "the nation's culture expected the Blacks to do the same but whether it was discrimination or lack of initiative on their part, perhaps a combination of both, it didn't work out..." See my other post (to the main article) for what is really left out.

All very noble sounding but the author forgot to include the Italian immigrants and their experience, which was much closer to that of the Irish than the Blacks. The Irish and the Italians scraped by with no especial programs to improve their lot, they both took whatever work they could find, menial, manual,whatever, until they fit into the mainstream. It seems to me that the nation's culture expected the Blacks to do the same but whether it was discrimination or lack of initiative on their part, perhaps a combination of both, it didn't work out for them. Unlike the Irish and the Italians their lot did not improve until it was forcefully legislated, that should have been the point for this author, not a comparison of the advances of the two groups. The author's high sounding comments aside, it is to America's shame that Blacks were held down, and worse, we still do. Obama's ascendancy does not alleviate the lot of so many Blacks in, e.g., the inner cities. nor does it change the government's continuing treatment of them as second class citizens needing quotas and welfare to subsist.