Mr. Bradley is assistant professor of history and African American Studies at St. Louis University.  He is the author of the new book Harlem vs. Columbia University:  Black Student Power in the Late 1960s (University of Illinois Press, 2009).  More information can be found here. 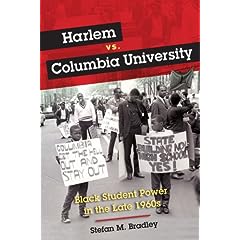 The story is all too common:  large institution wants to expand; local residents oppose large institution; large institution expands anyway.  There are countless instances, from sprawling Super Walmarts providing cheap shopping in rural areas to institutions of higher education gobbling up city blocks to provide a service for the larger society.

That currently seems to be the case with Columbia University in the City of New York as it expands into the Manhattanville section of Harlem.  There was a time, however, when a seemingly powerless Harlem prevented the powerful Ivy League university (and alma mater of the current president of the United States) from achieving its expansion goals.

When time and space collide, the result is history.  As Columbia University met with the tumultuous 1960s, it found itself next to an increasingly militant black community in Harlem that had grown to resent the elite Ivy League institution.  Taking advantage of the urban renewal movement of the late 1950s and early 1960s, Columbia attempted to keep the neighborhoods that surround it in check by purchasing land and buildings.  While expanding, Columbia eliminated housing for poor, black, and Puerto Rican people.  Although these residents were rankled, many felt as though they could not resist the desires of the second largest land holder in the city.  That was, at least, until time and space caught up with Columbia.

Harlem activists intensified their campaign against Columbia in the mid-1960s when the university attempted to build a gymnasium in a park that separated the predominantly white institution from Harlem.  In the almost scripted fashion of the Civil Rights movement, community members first launched their opposition to the gym by appealing to university and city officials.  Columbia officials explained that the new facility would benefit both the university and the community, with 85 percent of the floor space dedicated to the university and 15 percent to the potential community patrons.

In the late 1960s, time met space when Black Power came to Harlem.  Black Power activists did not advise appealing to institutional white power, but rather demanding and, if necessary, taking control of issues that affected black people.  The few black students on Columbia’s campus took up the campaign against the gym as part of their desire to advance the black freedom struggle.  At the same time radical white students saw the gym, along with the school’s ties to war research, as an issue that could help to jolt the majority white student body from its apathy with regard to university policy issues.  In this rare case, local residents, in alliance with black politicians (including Charles Rangel, Shirley Chisholm, Basil Paterson, and Percy Sutton), activists (like Bayard Rustin, Stokely Carmichael, and H. Rap Brown) and students from Columbia provided a new model for history.

With the riots that occurred in Harlem after the April 4, 1968 assassination of Martin Luther King, Jr. looming in the minds of university and city officials, the Columbia administration eventually suspended construction of the gym. That was not, however, before students staged a weeklong demonstration that ended with 1,000 city police officers brutally removing the youthful demonstrators from the campus buildings they had seized.  Riding the tide of the victory over the gym, in 1969 Columbia’s black student activists continued the movement by demanding a black studies institute.  They, like other black students in the Ivy League, brought the philosophies and methodologies of Black Power to campus.

It took the efforts of an assortment of groups to prevent the university from taking even more space and control from Harlem.  It also took the influence of several social movements—antiwar, youth/student power, Civil Rights, Black Power—to shape the opinions of those involved.  Columbia, whose leaders often dictated economic, social, and political policy in the nation and the world, could not defeat the will of the people in the 1960s.  The gymnasium in the park would have been a symbol of the racism and powerlessness that so many Harlem residents and black people throughout the nation had faced.  While those residents knew that they could not keep Columbia from expanding in the future, they could at least lay claim to a small victory over what they viewed was an overbearing institution.

There is much to be learned from Columbia’s historic relationship with Harlem.  For instance, institutional expansion in itself is not necessarily detrimental to a community, but expansion without the consultation of those who are to be impacted is a sure sign of future difficulties.  For as much good as Columbia has done and will continue to do for the world, it can do as much damage to the neighborhoods into which it expands. When considering the history of Columbia University in the City of New York and Harlem, one finds that no institution is impregnable.  Although rare, the people can muster the power to change their situations by using time and space to their advantage.

Mr. Bradley has been very fair in this piece, and touches nicely on a very real problem, not just with ethnic neighborhoods, but with all neighborhoods that wish to preserve and savor their essence. Whether it is a battlefield, a memorial area, a graveyard, or a museum, there are and should be limits to gross expansion.

In the mid '60's I was very active in Columbia Congres of Racial Equality. Most of our members were white civil rights activists, and we had been organizing rent striked in the dog leg district of Harlem around 110th and Columbus Ave. Columbia's take over of the park for a gym would have deprived West Harlem of its only park sspace. The 85/15 split with the community of use of the gym was a laugh, for the 15% of the time reserved for the community was late at night or early in the morning. The tennents of several buildings I organized were incensed, so I got them to stage the first demonstration against the Gym in 1966. We proceeded to lobby at cith land use hearings. Then the poiticians got involved, but mainly because of the Riverside Reform Democrats and Congressman Bill Ryan, not because of Rangell or Sutton at first. Columbia then built a fence around the site. In '68 there was a anti-war rally put on by Mark Rudd and the Columbia SDS, mainly against Columbia's collusion with the government and the war. The students were very angry and ready for action, and SDS speakers couldn't suggest any realistic target for the crowd. Then a CORE activist took the mike and called for a march on the Gym to tear down the fence. The students did that, and the take over of Columbia began, with CORE members working with the community against the gym, supporting the new Black Student Movement in their call for Black studies. There are many lessons, but it started with community organizing on very local issues of rent strikes and slum landlords. Tom Schmidt

It seems to me different article,thx for sharing this!
000-330