Blogs > Jim Loewen > It's Time to De-Confederatize "The American Pageant": An Open Letter to David Kennedy

It's Time to De-Confederatize "The American Pageant": An Open Letter to David Kennedy

Sociologist James W. Loewen is the author of "Lies My Teacher Told Me."

Like our textbooks, this monument to Jefferson Davis in Richmond, VA, mystifies the Confederate cause.

Recently you and I crossed swords in a way, in an article in the Washington Post. Education reporter Emma Brown interviewed both of us and then wrote, "150 Years Later, Schools Are Still A Battlefield For Interpreting Civil War."

Having read eighteen U.S. history textbooks closely for my book, Lies My Teacher Told Me:  Everything Your American History Textbook Got Wrong, I was able to criticize them for, as Brown put it, "failure to quote from key primary sources: the Southern states' declarations of secession, which made clear that they were leaving the union to protect white citizens' right to own slaves."

From one of these sources, "Declaration of the Immediate Causes Which Induce and Justify the Secession of the State of Mississippi from the Federal Union," she then quoted a key passage: "Our position is thoroughly identified with the institution of slavery."[1]

Brown went on to report what I had said to her about your book, American Pageant, one of the best-selling U.S. history textbooks for high-school students. I called Pageant unusual in that it actually (in Brown's words) "quoted directly from South Carolina's secession document. That's admirable, Loewen said, but the quotation leaves out the document's direct language about the role of slavery in driving South Carolina's decision."

Then she reported her conversation with you. "Loewen is nitpicking. 'I would defy anybody who read our text to conclude that we were unaware of slavery as the cause of the Civil War.' "

Did I nitpick? Let's see.

Here's what you quote:

We affirm that the ends for which this [Federal] Government was instituted have been defeated, and the government itself has been destructive of them by the action of the non-slaveholding States.... For twenty-five years this agitation has been steadily increasing, until it has now secured to its aid the power of the common Government. Observing the forms of the Constitution, a sectional party has found within that article establishing the Executive Department, the means of subverting the Constitution itself.

Notice that "slavery" does not appear. Nor is it implied. Instead, some vague "ends" for which the Government was formed "have been defeated," and "the Constitution" has somehow been subverted. Something has been agitated, but "this agitation" is about what? Logically, no reader can infer that slavery lurks behind these vague words, because the "non-slaveholding States" could be upset about tariffs, taxes, internal improvements — who knows?

It isn't easy to quote the "Declaration of the Immediate Causes" at this length without mentioning slavery, because it comes back to slavery over and over. Let's investigate how you manage this feat.

At the beginning, you make one error in transcribing the document. You write, "We affirm that the ends for which this [Federal] Government was instituted," but the document says "these ends." This error could not be random. Had you transcribed the document correctly, "these ends" would have alerted readers that something important had been referred to, just upstream. "These ends?" What ends?

In the passage just before "these ends," South Carolina tells how the Constitution confers "the right of property in slaves" and "the rendition of fugitives from labor." "Rendition" means, of course, "legal return." A bit upstream of that, the document quotes the fugitive slave clause of the Constitution and complains that Northern states have not done their duty to fulfill it. That's what this quoted passage is all about. Indeed, that's what the entire document is about. Your excerpt offers no hint, however.

Next, let's explore those four little dots you insert into the middle of the quote. Let's put back what you leave out.

Those States have assumed the right of deciding upon the propriety of our domestic institutions; and have denied the rights of property established in fifteen of the States and recognized by the Constitution; they have denounced as sinful the institution of Slavery; they have permitted the open establishment among them of societies, whose avowed object is to disturb the peace of and eloign the property of the citizens of other States. They have encouraged and assisted thousands of our slaves to leave their homes; and those who remain, have been incited by emissaries, books, and pictures, to servile insurrection.

That is some ellipsis! Doesn't that make my point? Did you not "leave out the document's direct language about the role of slavery in driving South Carolina's decision?" Had you included any of it, then no reader could be confused. Agitation about what, indeed! About slavery, of course.

Surely that's why you left it out, no? That is, surely Houghton Mifflin did not want to include anything directly on point, lest neo-Confederates on Southern state textbook adoption boards take offense.

After all, teachers need all the help they can get, concerning secession. The issue isn't whether you "were unaware of slavery as the cause of the Civil War," as you put it to Brown. I'm sure that you know that slavery was why the South seceded, David.[2] But most teachers do not. I know, because over the last ten years I have asked several thousand K-12 teachers of social studies and U.S. history this question: "Why did the South secede?" Teachers always generate four answers:

(3) the election of Lincoln

Then I ask them to vote. The results have not been pretty, although they are remarkably uniform across the country.

Why did the South secede? 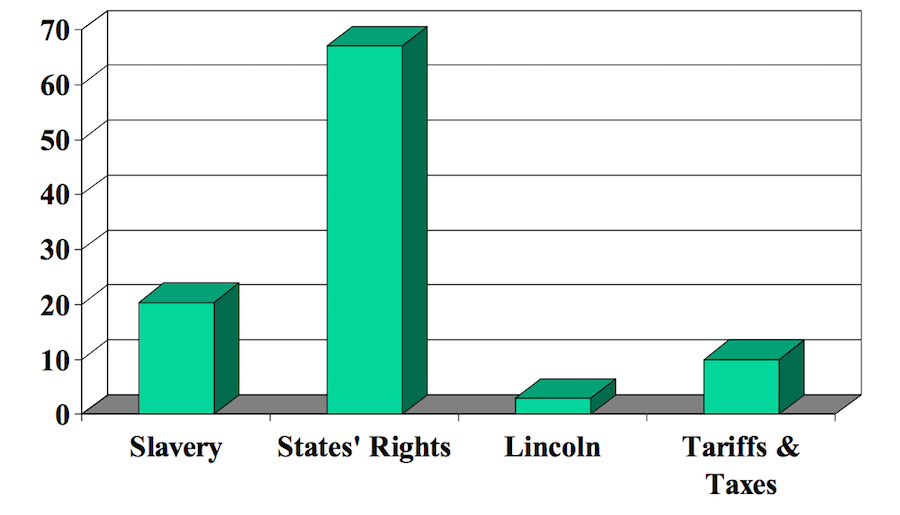 This graph should sadden everyone in the United States who cares about history. A century and a half after the Civil War, most teachers — a clear majority — still get secession 180° wrong. South Carolina and all other states succeeded because they were against, not for, states' rights. They seceded for slavery (and also owing to the election of Lincoln, to be sure).

Then I ask, "What would be the best evidence to resolve the matter?" Individuals volunteer "diaries from the time" and "newspaper articles," a bit vague. Sometimes I banter with them: "The diary of an 1859 dairy farmer in Michigan?" Immediately they respond, no, diaries or articles from Charleston — better answers, but still hardly the best. Eventually, someone asks, "Wasn't there some sort of convention? Didn't it say why South Carolina was leaving the Union?" Yes, I reply, and I read to them the title of the document we are discussing here.

Once they learn of South Carolina's "Declaration," teachers realize that it is the best single source. Its title alone convinces them that it is the smoking gun.[3] Hence they will believe it, in your book, above your own words, which do present slavery as the primary cause. Then they will continue to misteach the cause of secession as states' rights, or perhaps present multiple causes — "sectionalism, states' rights, and slavery," in that order, to quote the infamous new standards in Texas.

From time to time, I have made lists of the ten most important documents in the history of the United States. It's a fun exercise. Of course the Declaration of Independence and the Constitution stand at the top, perhaps not in that order. What next? Lincoln's Gettysburg Address? I don't think so, since it announces no new policy beyond "a new birth of freedom," and that birth — of black freedom, of course — had already been announced in the Emancipation Proclamation. Maybe then the Emancipation Proclamation itself? Richard Hofstadter famously quipped that the Emancipation Proclamation has "all the moral grandeur of a bill of lading," and he had a point. Also, African Americans were freeing themselves at a remarkable rate, both in the border states and whenever U.S. troops came near them in the South. Still, it did change national policy and led directly both to the United States Colored Troops and the Thirteenth Amendment. So, OK, let's include it.

I don't know what else you might nominate, David, but surely this document, the one we are "nitpicking," must rank among the top five. After all, it prompted the Civil War — the most important single event since the formation of the nation. As well, it provided the direct model for similar declarations by Mississippi and Texas, as well as the arguments made by most other states when they seceded. (See The Confederate and Neo-Confederate Reader for these documents.)

So much for nitpicking!

David, in all, your quotation runs 81 words. Here is an alternative selection:

[T]he non-slaveholding States .... have denounced as sinful the institution of Slavery; they have permitted the open establishment among them of societies, whose avowed object is to disturb the peace of and eloign the property of the citizens of other States. They have encouraged and assisted thousands of our slaves to leave their homes; and those who remain, have been incited by emissaries, books, and pictures, to servile insurrection.

Substitute these words, and no reader will ever again be confused. They total only 70, so they'll fit fine. Will you ask Houghton Mifflin to make this change?

Thank you for your consideration — Jim Loewen


[1] She mistranscribed "thoroughly" as "clearly."

[2] Slavery of course did not drive the Union cause. The U.S. went to war to hold the nation together (and because Confederates attacked). Soon enough, however, on the ground and after the Emancipation Proclamation, ending slavery became a U.S. war aim.

[3] Why do you retitle it ("declaration of independence")? Isn't the original title dramatic enough?