Don’t Tear Down the Wrong Monuments; Don’t Attack Every Holiday

The United States defeated the Confederacy's Army of Northern Virginia at Gettysburg on July 3, 1863. That same evening, General John Pemberton agreed to surrender the Confederate army holding Vicksburg to Ulysses Grant. The next day, when the news of both Union victories began to spread through the nation, was surely the most memorable Independence Day in American history after the first one, four score and seven years earlier. Pemberton’s men stacked their arms and went home. Lee’s men withdrew from Gettysburg and made their way south.

Historians have argued ever since over which victory was more important.

Both battlefields are now under the care of the National Park Service. This past Fourth of July, few people visited either, but when travel becomes easier, if you're within range, I suggest you visit whichever park is closer. Both parks are beautiful, especially in mid-summer. However, do not ask the question several NPS rangers submitted to me as their nomination for the dumbest query ever received from a visitor: "How come they fought so many Civil War battles in parks?" Instead, if you're at Vicksburg, suggest to the ranger that Gettysburg was the more important victory; if at Gettysburg, suggest Vicksburg. Probably you and your fellow tourists will be informed as well as entertained by the response.

Perhaps the Mississippi victory was more telling, for several reasons. Vicksburg had been called "the Gibraltar of the Confederacy." After Richmond, the Confederate capital, it was surely the most strategic single place in the South, because it simultaneously blocked United States shipping down the Mississippi River and provided the Confederacy with its only secure link to the trans-Mississippi West. Vicksburg's capture led to the capitulation of the last Confederate stronghold on the Mississippi, Port Hudson, Louisiana, 130 miles south, five days later. This reopened the Mississippi River, an important benefit to farmers in its vast watershed, stretching from central Pennsylvania to northwestern Montana. Abraham Lincoln announced the victory with the famous phrase, "The Father of Waters again goes unvexed to the sea." In the wake of the victory, thousands of African Americans made their way to Vicksburg to be free, get legally married, help out the Union cause, make a buck, do the laundry and gather the firewood, and enlist in the United States Army. No longer was slavery secure in Mississippi, Arkansas, or Louisiana. Many whites from these states and west Tennessee also now joined the Union cause.

But perhaps the Pennsylvania victory was more important. It taught the Army of the Potomac that Robert E. Lee and his forces were vincible. Freeman Cleaves, biographer of General George Gordon Meade, victor at Gettysburg, quotes a former Union corps commander, "I did not believe the enemy could be whipped." Lee's losses forced his army to a defensive posture for the rest of the war. The impact of the victory on Northern morale was profound. And of course it led to the immortal words of the Gettysburg Address.

If you go to Vicksburg on the Fourth, be sure to visit the Illinois monument, a small marble pantheon that somehow stays cool even on the hottest July day. In Gettysburg, don't fail to take in the South Carolina monument. It claims, "Abiding faith in the sacredness of states rights provided their creed here" — a statement true about 1965, when it went up, but false about 1863. After all, in 1860, South Carolinians were perfectly clear about why they were seceding, and "states rights" had nothing to do with it. South Carolina was against states’ rights. South Carolina found no fault with the federal government when it said why it seceded, on Christmas Eve, 1860. On the contrary, its leaders found fault with Northern states and the rights they were trying to assert. These amounted to, according to South Carolina, “an increasing hostility on the part of the non-slaveholding States to the institution of slavery.” At both parks, come to your own conclusion about how the National Park Service is meeting its 1999 Congressional mandate "to recognize and include ... the unique role that the institution of slavery played in causing the Civil War."

The twin victories have also influenced how Americans have celebrated the Fourth of July since 1863. Living in Mississippi a century later taught me about the muted racial politics of the Fourth of July. African Americans celebrated this holiday with big family barbecues, speeches, and public gatherings in segregated black parks. Even white supremacists could hardly deny blacks the occasion to hold forth in segregated settings, since African Americans were only showing their patriotism, not holding some kind of fearsome “Black Power” rally. Both sides knew these gatherings had an edge, however. Black speakers did not fail to identify the Union victories with the anti-slavery cause and the still-unfinished removal of the vestiges of slavery from American life. This coded identification of the Fourth with freedom was the sweeter because in the 1960s, die-hard white Mississippians did not want to celebrate the Fourth at all, because they were still mourning the surrender at Vicksburg. We in the BLM movement can take a cue from the past. We can be patriotic on July 4 without being nationalistic. As Frederick Douglass put it, by my memory, “I call him a true patriot who rebukes his country for its sins, and does not excuse them.” And true patriots can also take pleasure from their country’s victories against a proslavery insurrection.

Muted racial politics also underlie the continuing changes on the landscape at both locations. In 1998 Gettysburg finally dedicated a new statue of James Longstreet, Lee's second in command. For more than a century, neo-Confederates had vilified Longstreet as responsible for the defeat. He did try to talk Lee out of the attack, deeming the U.S. position too strong, and his forces did take a long time getting into place. 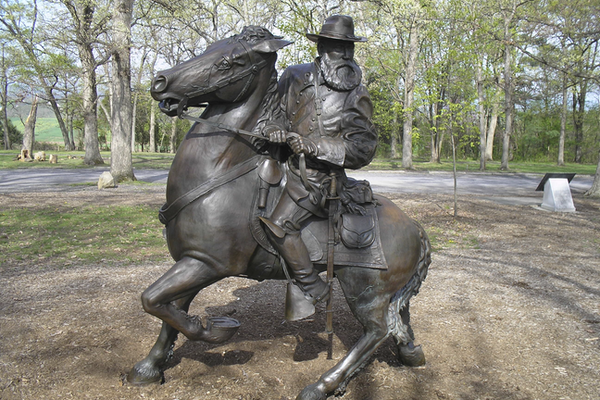 James Longstreet had to wait to appear on the Gettysburg landscape until the United States became less racist.

Hopefully BLM protesters are informed enough to know not to tag or topple this Confederate monument.

But the criticisms of Longstreet really stemmed from his actions after the Civil War. During Reconstruction he agreed that African Americans should have full civil rights and commanded black troops against an attempted white supremacist overthrow of the interracial Republican government of Louisiana. Ironically, ideological currents set into motion by the Civil Rights movement help explain why Gettysburg can now honor Longstreet. No longer do we consider it wrong to be in favor of equal rights for all, as we did during the Nadir.

When I lived in Mississippi in the 1960s and '70s, bad history plagued how Grant’s campaign was remembered on the landscape. For example, a state historical marker stood a few miles south of Vicksburg at Rocky Springs:

Upon the occupation of Willow Springs on May 3, 1863, Union Gen. J. A. McClernand sent patrols up the Jackson road.

These groups rode through Rocky Springs, where they encountered no resistance beyond the icy stares of the people who gathered at the side of the road to watch.

Actually, the area was then and remains today overwhelmingly black. "The people," mostly African Americans, supplied the patrols with food, showed them the best roads to Jackson, and told them exactly where the Confederates were. Indeed, support from the African American infrastructure made Grant's Vicksburg campaign possible.

In about 1998, Mississippi took down this counterfactual marker. Or maybe a vigilante stole it — no one claims to know. Either way, the landscape benefits from its removal. Six years later, with funding from the state and from Vicksburg, a monument to roles African Americans played in support of Grant’s campaign went up at Vicksburg. It shows a wounded U.S.C.T. (United States Colored Troops) soldier being helped to safety by another member of the U.S.C.T. and by a black civilian.

Now, if we can just fix that pesky South Carolina monument...