Wallace Hettle is professor of history at the University of Northern Iowa and the author of "Inventing Stonewall Jackson: A Civil War Hero in History and Memory." 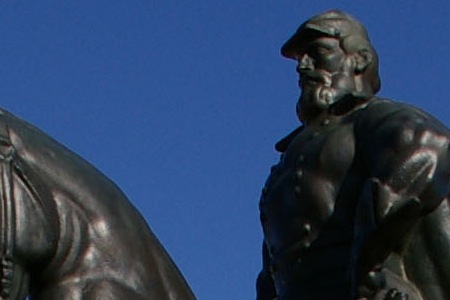 Next week will mark the 150th anniversary of First Bull Run, the initial major battle of the Civil War.  The combat that day remains memorable for several reasons, including the importance of the telegraph and the use of trains to transport troops.  Few images in Civil War history are more compelling and tragic than the panic of green Union soldiers running away from the field.

One other notable aspect of First Bull Run is that here Gen. Thomas J. “Stonewall” Jackson got his nickname.  South Carolina’s Barnard Bee, mortally wounded in the battle, is believed to have proclaimed something like “there stands Jackson like a stone wall.  Let us determine to die here and we shall conquer.”  He may have said it, though it is not clear who heard him in the din of battle.   If he did say that above the clash of artillery, we may think his words a bit pretentious.  It does not matter:  Jackson had been “baptized with blood.”  The Confederacy needed a hero with a cool nickname, and Jackson fit the bill.

Jackson’s heroic wartime image, as well as his posthumous reputation, is not just about a nickname.  Jackson became a truly great general, but his fame goes beyond his military exploits.  While the Lost Cause movement to memorialize the Confederacy may have slightly faded by the middle of the twentieth century, traces of admiration for Jackson remain on the landscape today.  If a traveler wants to commemorate Jackson’s death, he needs to visit a good half dozen sites.  The first would be the Stonewall Jackson Memorial Cemetery in Lexington, Virginia.  There Jackson lies with his second wife and daughter under a suitably idealized statue of the standing general, sculpted by Edward Valentine in 1891.  From the cemetery, one can continue in Lexington to the Virginia Military Institute, or VMI, where Jackson taught until 1861.  VMI, in ways more numerous than one can describe in brief, serves as a living memorial to Jackson.  A perennial attraction there is the mounted hide of Jackson’s warhorse, Little Sorrel.  The horse’s hide attracts 50,000 viewers a year.  After the long-past indignity of being skinned by a taxidermist, Little Sorrel today gets genuine respect.  Rescued from a drawer on campus in 1997, the horse’s bones have been buried under a tastefully understated marker in his memory, on the school’s parade grounds.

If one travels east to the battlefield at Chancellorsville, Virginia, one can see both a modern obelisk and an older, timeworn tablet, both of which supposedly mark the spot where a fatal volley fired by his own men hit Jackson.  (Of course, both markers cannot be correct.)  There is a related shrine about thirty miles to the south.  Jackson was badly wounded in his left arm, and the risk of gangrene required amputation.  After emergency surgery, authorities quickly moved him south to Guinea Station.  The surgery failed to save the general, who lingered and died of pneumonia, or perhaps sepsis.  A “Stonewall Jackson Shrine,” complete with the deathbed, still marks where Jackson passed away.

However, that still leaves more spots on the tour.  Strange as it may seem, no tribute to Jackson’s death can neglect his left arm, buried on the Chancellorsville battlefield.  The site of Jackson’s arm, marked by a simple gravestone, is open to the public on weekends only.  During the week, the National Park Service can provide a pass and directions to the resting place of the arm, which lies on park service land.  James Power Smith, the last surviving member of Jackson’s staff, erected the marker in 1903, on land known as Ellwood Plantation, which the park service has recently acquired.  According to Park Service historian John Hennessey, his colleagues have been surprised by the “intense interest generated not by the magnificent [Ellwood] house, but by the curiosity of Jackson’s arm.”  There is a final irony in Jackson’s highly memorialized death.  Smith’s marker only approximately shows where Jackson’s arm lays—no one today is quite sure where it is actually buried.  Still, tourists come to visit what they believe is the site of Jackson’s arm, and the marker rewards them with a sense of certainty that they have completed their task.

Scholar Barry Schwartz has described modern America as a cynical “post-heroic society.”  After Vietnam, Watergate, and a host of other scandals, sophisticated Americans are supposed to know that even the greatest of leaders can have glaring flaws.  Some of us today feel a bit foolish expressing adulation for any historical figure.  Yet a significant audience still idolizes Jackson.  Readers of military history see in him an admirable blend of ferocity and genius, and treat his Shenandoah Valley campaign of 1862 as a sign of greatness.  In the wake of Ron Maxwell’s laudatory 2003 film featuring Jackson, Gods and Generals, a significant number of present-day Americans found inspiration in the Jackson family’s home life, seemingly based on ideals of Christian piety.  Jackson also receives accolades for his conspicuous religiosity.  As journalist Jeff Sharlet noted in a Harper’s Magazine story, “In the pantheon of fundamentalist history, the man revered above all others is General Stonewall Jackson of the Confederacy.”

Thus, Jackson remains a hero to this day, admired by countless Americans north and south.  Among Confederate heroes, only Robert E. Lee surpasses Jackson in popular esteem.  Such veneration is difficult to measure with precision.  Yet as recently as 1995, the U.S. Postal Service issued a stamp honoring Jackson, making him a figure who apparently transcends the normal bureaucratic dynamics of political correctness.  That stamp, mounted as a lapel pin, was one of many tributes to Jackson available on eBay in 2010.

Martyrs like Jackson are as varied as the myth-makers who tell their stories.  In spite of Jackson’s popularity with southern conservatives, martyrdom is not just a quirk of the religious right.  If you dislike Jackson because he fought for the Confederacy and owned slaves, you can revere the Chicago’s Haymarket martyrs, left-wing folksinger Joe Hill, or Leon Trotsky.  If politics is not your thing, there is always fiction.  There is Uncle Tom, for example.  My son, like so many kids, admires Harry Potter’s mentor, Dumbledore, who was slain by a double agent working for the evil Voldemort.

In writing about Jackson in history and memory, I ran a certain risk.  I am a life-long resident of the Midwest, raised in a Protestant church.  I have read every book on the Lost Cause I could find.  Yet Jackson, the monuments, markers, and relics all struck me as a little weird—almost like Catholic reverence for a saint.  Since this view of heritage activities is enormously patronizing to conservative white southerners, I have tried to excise it from my book.  (I may not have succeeded, but you will have to read the book to find that out).  For most people the decision to revere a heroic martyr is not bizarre or pernicious—it is a way of identifying with a selfless act for the good of a higher cause.  My home office sports a bust of Jackson, but across the room a Malcolm X poster stares down ominously at Stonewall.  Some would say that fascination with dead heroes is out step in our supposedly skeptical age, but such a view embodies a condescension towards ordinary people I would rather do without.