Why Ports Are the New Factories

Louis Hyman attended Columbia University, where he received a BA in History and Mathematics. A former Fulbright scholar, he received his PhD in American history in 2007 from Harvard University. He is currently an assistant professor in Cornell University’s School of Industrial and Labor Relations, where he teaches history. Cross-posted from the Huffington Post. 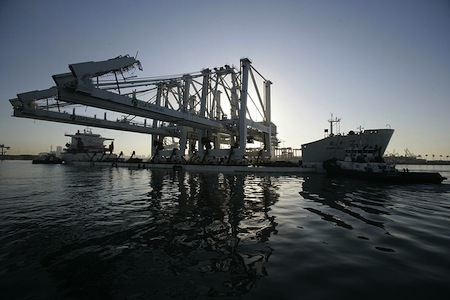 Last month, union activists across the country celebrated what they saw as the latest opportunity to kickstart the moribund labor movement: a strike at Walmart on Black Friday. Retail workers, or as Walmart calls them, "associates," across the country were to walk out on the greatest shopping day of the year. The walkout was to signal the national unity of retail workers and strike a blow that would stagger the giant from Bentonville. At the same time, it would galvanize liberal consumers who would support the walk-out by their refusal to shop. Bringing together consumers and workers, they believed, would force America's largest retailer to the negotiating table.

Walkouts were erratic. Shoppers, most of whom were hard-pressed workers themselves, thought more about the presents under the tree than the picket lines, if there were any. It turns out, as one might expect, that coordinating a walkout at thousands of locations across the country was hard, even in this age of social media.

Yet, at the same time, another strike was going on that received far less attention -- though it still threatened Walmart's ability to deliver all those cheap Chinese-manufactured goods through the country. This strike did not have the visceral satisfaction of picketing Walmart, whether as an underpaid worker or as a politically-conscious consumer. But this strike was more important than the Black Friday strike, not only because it was successful, but because it augured a new realization of the sources of union strength in our economy.

The planners of the Walmart strike saw retail stores as the new factories. We live in a service economy, after all, and customer service representatives are the new proletariat. In this line of thinking, we need to organize retail workers and then, through solidarity, we will be able to bring back the union strength that made possible the postwar prosperity.

This argument, which feels so right, is fatally flawed. Walmart stores are not GM factories.

Retail chains sprawl across the country. When a union tries to organize a store, that particular location can simply close up shop, move somewhere else, and hire new staff. The inventories can be easily moved. Retail is essentially flexible and its work deskilled. Workers and shops can be replaced. The cost of unionization would be higher than the cost of an additional store (which are opening every day somewhere else).

The success of the factory labor movement in the twentieth century required both of those factors to be the opposite of what we have in retail: workers, inventory, location, and plant are inflexible.

It also must be remembered that the powerful postwar labor movement, which brought us things like pensions and weekends, came about not in the midst of prosperity but in the middle of the Great Depression -- fighting the most powerful corporation in America, General Motors -- exactly when we would think it would be most impossible to organize. Consider what many labor historians consider to be the kickoff for the last great labor movement in the 20th century: the Flint sitdown strike of 1936, which made the United Auto Workers into a juggernaut.

The Flint sitdown strike is remembered for its control of a factory and giving birth to the UAW. Labor advocates celebrate the solidarity of the workers who occupied an auto body plant in the middle of a Michigan winter, facing down water hoses, rifles and tear gas. Yet these labor proponents have remembered the wrong lesson of that strike. The solidarity, while necessary, was not sufficient to win the strike. What mattered was where the strike occurred.

What is forgotten is that the workers chose that factory, among GM's hundreds, because it made auto bodies which could be made nowhere else. The dies that stamped metal into cars only there and could not be replaced. When the UAW shut down that one factory, all of GM stopped. All of its suppliers stopped. The largest corporation in America was brought to its knees.

Today labor remembers the strike but not the strategy. It celebrates the Walmart strike because Walmart is powerful like GM, but it draws the wrong lessons from history. Activists think they can organize every Walmart in America. Such a strike would link their consumerist disdain with their romantic half-understood memories of factory strikes. But to organize those tens of thousands of stores one by one is not possible. We have tried for a generation and failed. Equally impossible would be organizing the thousands of Chinese factories that supply those stores. But between the factories and the stores there is an opportunity.

What would the Flint sitdown strike look like today?

To call our economy a service economy is a misnomer. We actually live in an economy based on distribution. The "service" economy is a category left over from the age of manufacturing, when there was manufacturing, agriculture and "other." Today we understand that there is a difference between distribution (which is transforming our economy) and professionals (who are not). The movement of goods and the movement of information is where innovation is happening today. In a distribution economy, workers need to control the chokepoints in the supply chain that have become the auto body plants of today.

The ports are the new factories.

Last month, beginning on November 27 in Los Angeles the longshoremen shut down the Long Beach and Los Angeles container ports. This strike got little national coverage because it was ostensibly about six hundred workers at a container site. There is understandably attention in discussing boring ports rather than evil Walmarts. But this strike actually shut down the movement of all those goods to all those Walmart stores. This strike, and the alliance between clerical workers and longshoremen, actually shows how to replicate the success of 1936, and by extension, the entire postwar labor movement.

Ports cannot be moved or replaced. The skilled workers who operate the specialized computers cannot be easily replaced. Without the container ports, the entire supply chain, not only for Walmart but for the economy, grinds to a halt.

The longshoremen on the East Coast have noticed the success of the West and are now threatening a strike of fourteen ports. Without those ports, Walmart and the rest of the retail economy will be brought to its knees. As we saw, two ports in Los Angeles can be organized, and it can bring the entire supply chain can be stopped. A small group of committed people can have a disproportionate effect.

Practical unionists and activists will remember that the success of the labor movement came from controlling strategic points in the supply chain that could not be replaced. In 1936 it was an auto body factory in Flint, Michigan. Today it is the container ports. The question for the labor movement is how to leverage the strength of the longshoremen into benefits not only for unionists but for workers across America. The UAW used its success to support a broad redistribution of income in the economy, helping to bring us the balanced growth of the postwar years. When the labor movement acknowledges the lessons of the past and the realities of the present, unions will once again be able to empower American workers, even in the midst of the Great Recession.