Carole Emberton teaches history at the University at Buffalo (SUNY). Her first book, "Beyond Redemption: Race, Violence, and the American South after the Civil War" will be published in June by the University of Chicago Press. She is currently at work on a cultural biography of Samuel Colt and the American gun industry in the nineteenth century. 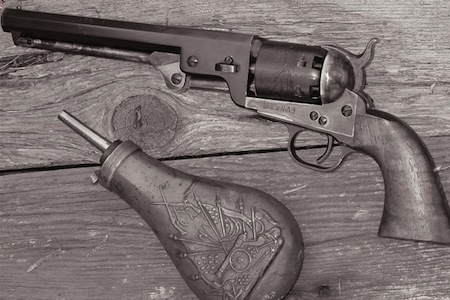 "I'm here to tell you, 1776 will commence again if you try to take our firearms!,” radio host Alex Jones warned British television journalist Piers Morgan on Monday. Leading the charge to have Morgan deported for voicing his opposition to America’s lax gun control laws, which many believe led to the shooting deaths of twenty children and six adults last month at Sandy Hook Elementary School in Connecticut, Jones attempted to cast Morgan as a modern-day Tory ready to reclaim the United States as Great Britain’s colonial possession. Although Morgan’s Britishness proved an effective prop to Jones’s revolutionary rhetoric, the current debate over gun control owes more to the Civil War Era than the American Revolution.

Although the production of personal firearms began to rise in the 1830s, there is little doubt that the Civil War led to an unprecedented proliferation in weaponry. The nation’s leading gun manufacturer at the time, Samuel Colt, saw his profits soar with the onset of war. Prior to the conflict, Colt’s Hartford armory – barely 50 miles from Sandy Hook – drew $237,000 annually. The company’s yearly revenue soared to over one million dollars once war officially commenced in 1861. The Union Army may have been one of his biggest clients, but Colt’s only loyalty was to his pocketbook. “Make hay while the sun shines,” he wrote to the manager of his armory while vacationing in Cuba during the secession crisis. “The news we get here is very warlike, and I am sure of a market for all the arms we can make whether there is a fight or not.” He even gave a 10% discount to southern states placing orders directly with the Hartford factory.

The war’s increased demand also precipitated technological innovations: cleaner, faster repeating mechanisms, along with increases in accuracy and distance, as well as reliability and uniformity of production. While it would be difficult to argue that Colt and other gun manufacturers perfected their craft during the Civil War, by 1865 it was easier to obtain and use a deadly firearm than ever before, a fact evident by the many classified ads for handguns published in daily newspapers around the country. Not only specialized dealers but also general dry goods stores advertised the latest Colt, Remington, or Smith & Wesson. The Wal-Marts of their day, dry goods stores stocked everything from flour and sugar to textiles, ready-made clothing, hardware, groceries, and increasingly guns. And as guns became easier to obtain, it’s no surprise that deaths, both accidental and intentional, followed as a result. There are no statistics for gun deaths during the late nineteenth century, so we can only rely on anecdotal evidence, like this report of a man fatally shot by his own young son while riding on a train in Kentucky in 1871. The man had fallen asleep while the boy, no doubt bored on the long ride between Louisville and Memphis, slipped his dozing father’s revolver out of his coat pocket and accidentally shot the man in the head. A similar tragedy occurred in Milan, Tennessee, a few years later in 1875, when a young woman picked up her brother's pistol, and not knowing that it was loaded, "thought to amuse herself by snapping a cap.” She pulled the trigger while the muzzle was near her sister's temple and killed her.

Despite such tragedies, post-Civil War Americans were becoming all the more committed to the belief that possessing firearms was an indispensable right of citizenship. During the bloody years of Reconstruction, the struggle to democratize the former Confederacy devolved into a paramilitary contest in many areas. Not only did ex-slaves’ practical ability to effectively exercise their newfound right to vote often depend on the presence of friendly militias to protect against intimidation, violence, and fraud, the ideological basis for black suffrage also hinged on the idea of armed self defense. Radical Republicans paired the right to vote with the right to bear arms, citing black men’s participation in the war effort as evidence of their worthiness to cast ballots. They also cited white southerners’ determination to prevent their former bondsmen from becoming citizens by disarming them as a reason to reaffirm both voting and private gun possession as twin rights of post-emancipation citizenship. By linking the Fifteenth Amendment to the Second Amendment, Radical Republicans sowed the seeds of their own demise.

By 1876, the nation’s centennial year, a reactionary tidal wave had swept away the remnants of Radical Reconstruction in the South. Paramilitary white supremacists in Louisiana, Mississippi, and South Carolina justified their armed assaults on Republican-led state and local offices by invoking their revolutionary forefathers’ armed revolt against tyranny. Organizing gun and rifle clubs throughout the Deep South, these self-proclaimed "minutemen" set out to “redeem” the white race from the ignominy of defeat and emancipation. To them, black citizenship signaled the worst kind of corruption. Emancipation unloosed four and a half million untutored, unprincipled, vindictive freedpeople upon the nation, they argued. Epidemics of crime and corruption resulted, they said, leaving whites unsafe in their own homes. Of course, black lives were the ones at risk from violence, but tales of black brutality proliferated nonetheless. But it was because their former slaves had performed the rituals of manhood and citizenship so well, both in the army and at the ballot box, that white southerners reacted so violently. Reclaiming the political legitimacy they had lost in 1865, the South’s self-styled Redeemers embraced the “militaristic patriotism” born in the debates over black civil and political rights a decade earlier. Their patriotism, however, was infused with suspicion, resentment, and paranoia. Emancipation had proved a great folly; George Fitzhugh, slavery’s most ardent apologist, called it “the great crime.” For attempting to alter the South’s racial dynamic by freeing, arming, and extending civil rights to former slaves, the federal government became something white citizens needed protection from.

In the summer of 1875, some of those same white paramilitary units participated in the run-up to the nation’s centennial celebrations in Philadelphia, New York, and Boston. Upon their arrival in Boston to celebrate the anniversary of the Battle of Bunker Hill, the media hailed Charleston’s Washington Light Infantry as “the first appearance on Northern streets of a military unit which had fought for the Confederacy,” and crowds infused with both curiosity and patriotism turned out to welcome the unit. Local leaders made speeches at various rally points praising the renewal of bonds based in the two state’s shared military history. “We are strangers and aliens no longer,” declared one member of the Charleston unit in a speech at Harvard University, “but brothers and fellow-citizens of one common country.” Boston’s mayor echoed these sentiments, calling on “good men” to recognize that America’s revolutionary heritage remained strong despite more recent hostilities and urging Americans to rejoice in the common goal of opposing despotism and tyranny. The warm glow of 1776 obscured the other work the guests of honor and the other rifle clubs would perform, namely murdering and terrorizing their way to power a year later.

The romance of the American Revolution lulled many Americans into believing that the Redeemers' violent rebuke of racial democracy was justified. And still today, 1776 provides a powerful but largely mythic appeal that justifies a political agenda born of a more recent past. Although a suspicion of centralized power is a constant theme in American political discourse that dates to the revolutionary period, the founding moment for the modern gun-rights debate was in the aftermath of the Civil War. The proliferation of firearms coupled with emancipation of southern slaves gave rise to a new tenet within American political culture that tied freedom and citizenship to guns. As the saying goes, “Abe Lincoln freed men, but Sam Colt made them equal.”