The Tragedy of Involuntary Commitment 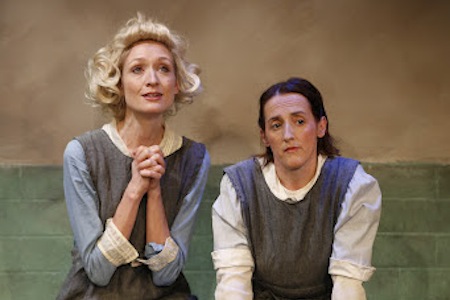 Airswimming is a jolting shocker about two women incarcerated in a mental hospital in England for fifty years due to their eccentricity and because they violated British society’s rules of conduct during the 1920s. At the same time, Charlotte Jones’s 1997 play is an enduring, enchanting story of the strength of the human spirit and how two people’s friendship helped them survive a living hell.

In 1922, Dora (played by Aedin Moloney) was tossed into St. Dymphnas Hospital for the Criminally Insane and followed there two years later by Persephone. They mark the first few years of their imprisonment, but so many years go by they lose count. The hospital has teamed them up to clean the bathrooms one hour each day, and that is the time we see them on stage. There, scrubbing down the bathtub, the pair realizes that they need each other to survive the Hades they occupy.

Ever so slowly, we learn why they are incarcerated at St. Dymphnas for so many years. Persephone, a tall, blonde, and flighty high-society debutante (played by Rachel Pickup) had a baby out of wedlock and shamed her family. When she was admitted, she was classified as a "moral imbecile." Dora lost her three brothers in World War I and then started wearing men’s clothes, smoking cigars and pretended that she was a man in their regiment. Her shaken family had her committed. The pair remained at St. Dymphnas, scrubbing the floors and counting off the years in their head.

To keep their sanity, the women become close friends. They create a world of their own amidst the bathrooms, corridors and dormitories of the hospital. They can’t go swimming, so they invent "air swimming," pretending they are swimming as they move their arms and legs in the air. They read books about how to drill holes in their heads to relieve pressure and make them happier. They adopt Doris Day as their patron saint and sing and dance to her songs, topped by her hit Que Sera Sera. Persephone becomes such a fan that she even has someone bring her a blonde wig so that she can look like Day (she doesn't).

The astonishing aspect of the play is that neither of their families ever tried to get them out. They were both a little bit "off" in 1920s England, and so they belonged locked away in a hospital. In that sense, Airswimming is reminiscent of the Irish play Magdalen, which was about similar practices in Ireland.

Despite (or perhaps because of) the inherent tragedy of Airswimming, the play is very funny.. Playwright Jones has written some very humorous scenes, many revolving around Doris Day, and the two inmates make pretty good comediennes.

Still, the play is not without weaknesses. Playwright Jones doesn't provide much context about British mental hospitals and the laws concerning committing patients.

Nevertheless, Jones has written a grim, yet funny, and oft-stunning small play, directed in this staging with great care by John Keating.

By the end of the play, the duo, by now well into their seventies, are released into the workd, but to what?