Robert Huddleston, a freelance writer, worked for NASA in the 1960s.

Editor's Note: On the tenth anniversary of the Space Shuttle Columbia re-entry disaster, Robert Huddleston, a NASA engineer in the 1960s, explains how NASA's top-heavy, mixture-of-public-and-private culture, so problematic during the shuttle program and a contributing factor to both the Columbia and Challenger disasters, dates back to the beginning of the agency. 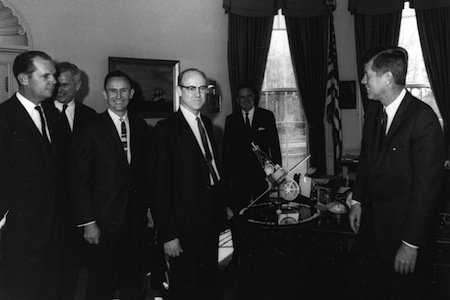 On October 4, 1957, the world’s first man-made satellite went into orbit around the earth sending the country into a state of shock. Sputnik I was a product of the Soviet Union, our Cold War adversary.

"How could this be?" Americans asked. The U.S. was supposed to be the leader in rocketry, having brought over German rocket experts at the end of the Second World War.

The United States did indeed have the capability, but failed in the execution. Committed to placing a satellite into orbit in 1958, during the International Geophysical Year (IGY) -- an intended PR coup -- the Eisenhower administration turned to a Navy-led effort, Project Vanguard. The Navy’s boast exceeded the boost of their rocket, leaving the Soviets to take first place in the Cold War, competition making headlines around the world. This setback was somewhat assuaged on January 31,1958 when the U.S. Army placed Explorer I, a creation of the former Nazi rocket experts, into Earth orbit, as did Project Vanguardin a second attempt.

President Eisenhower, who considered space a military issue, was against "a powerful, large, and costly new federal bureaucracy." He was overwhelmed, however, by influential forces. The scientific community saw it as an opportunity to exert more influence on the government; private corporations and universities envisioned huge government contracts. Also, politicians viewed space as a new challenge in the competition with the Soviets. The American Rocket Society even presumed to advise the president as to "the structure, budgets, and mission" of a space program.

Wernher von Braun, a federal employee, even upstaged his boss by informing the public what should be done.

Though intrepid in wartime, our peacetime political leader couldn’t withstand the pressure. On July 29, 1958, President Eisenhower signed into law the National Aeronautics and Space Act and on October 1, NASA was up and running. (NOTE: President Eisenhower’s "battle" is covered in "Eisenhower, Sputnik, and the Creation of NASA" by Roger D. Launius found in Prologue: Quarterly of the National Archives and Records Administration, Summer 1996.)

The National Aeronautics and Space Administration (NASA) was created by consolidating several ongoing organizations with the leadership assigned to the National Advisory Committee for Aeronautics (NACA).

NACA, established in 1915, "had long been a small, loosely organized, and elitist organization known for both its technological competence and its apolitical culture," writes Roger D. Launius, the curator of the Planetary Exploration Program at the Smithsonian. Accepted as the leader by the aircraft industry and the military services, NACA’s laboratories were devoted to all aspects of aeronautics, and more recently, to space technology.

NASA would be headed by a presidential appointee subject to confirmation by the Senate. As the Administrator, President Eisenhower named Dr. T. Keith Glennan, president of the Case Institute of Technology, and Dr. Hugh Dryden, director of NACA, was appointed Deputy Administrator. The third leg of the leadership was the Associate Administrator, Richard E. Horner, former Assistant Secretary of the Air Force for Research and Development, soon replaced by Dr. Robert C. Seamans, Jr., former chief engineer of RCA Missile Electronics and Control Division.

Other organizations drawn into this new federal agency was a section of the Army’s Ballistic Missile Agency (ABMA), the employer of the German-American rocket experts, and Navy civilian personnel of Project Vanguard. Also included was the Jet Propulsion Laboratory (JPL) of the California Institute of Technology. JPL’s contract with the Army now shifted to NASA. NASA, at its creation, would employ several thousand federal civil servants plus the employees of JPL, a private institution. Soon, however, many more civil servants and private contractors would be required to accomplish a new mission.

On May 25, 1961, before a joint session of Congress, President John F. Kennedy laid out a challenge to the nation, but more specifically to NASA, ... to land a man on the moon by the end of the decade: A challenge that generated unqualified support from Republicans and Democrats alike. Neither politicians nor the public voiced any objection to this challenge being placed on a civilian agency rather than the Pentagon. To lead the effort, President Kennedy chose James E. Webb. Neither a scientist nor an engineer, Webb had been President Truman’s budget director and his primary role would be to convince the Congress -- and the public -- to provide the funds required to propel the nation into first place in the space race. Most of NASA’s appropriated funds went to private companies and universities. NASA personnel decided what was to be done, invited bids from those who evidenced the capability, estimated the cost, then chose the best available source. The most difficult task for the government managers came in monitoring a project. It wasn’t unusual for Goddard (Goddard Space Flight Center [GSFC]) managers to complain: It’s very difficult to get contractors, be they in industry or at universities, to do what they agreed to do, when they said they would do it, and at the price agreed upon. This situation was echoed throughout the space agency.

Joining NASA in September 1959, first at Goddard, later at NASA Headquarters, I learned first-hand of the topdown approach to managing this large organization. By the mid-1960s, NASA’s field centers had begun complaining about the interference of NASA Headquarters. Nowhere is this better documented than in The Life and Death of a Satellite: A Biography of the Men and Machines at War with Space, by Alfred Bester (1966). The author pays tribute to the dedication and outstanding performance of NASA’s personnel before the new agency moved away from the culture of the NACA where a small headquarters staff set the direction, obtained needed funds, but left it to the field centers to manage without undue interference. Rejecting the NACA model, NASA’s leaders soon began micro-managing the field centers. Values and directions began flowing from the top: Do what you are told to do, not what you believe ought to be done, was communicated throughout the agency.

"By 1965," author Bester writes, "NASA headquarters was determined to make its two most independent centers, Goddard and JPL, conform to its’ management philosophy and was bringing pressure on both. Headquarters insisted on having a voice in all operations. (Dr. Harry Goett, director of Goddard) ... refused to make the slightest concession. He was delivering exactly what he had been asked to deliver, and he wanted no kibitzers."

Dr. Goett lost the fight, was bumped up to NASA Headquarters but soon departed to join the Philco corporation as director of the New Products Division. Following nearly three decades as a federal civil servant, he learned that industry paid a much higher salary for fewer demanding duties.

Politicians, who would privatize many functions of government, would do well to review the history of NASA. It is size, not the distinction of being public or private, that results in a bureaucracy that breeds micro-management and stifles innovation. As a manager, the Administrator of NASA differs from the CEO of a large corporation only in that the CEO occupies a large fancy office, travels in a private jet, and draws an unconscionable salary much of which may end in an offshore bank account.