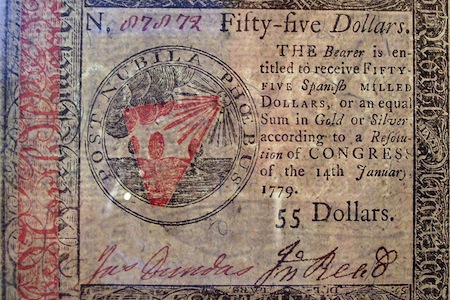 A 1779 fifty-five dollar note printed by the Continental Congress. Via Wiki Commons.

"Welcome to the Continental Congress."

"I'm not sure what you mean by that, Mr. President."

"I mean we're on our way to a visit to the people who almost lost the American Revolution -- if we continue to try to maintain the illusion that our money has any value when the interest rate for borrowing it is zero and we try to solve our mounting debt problems by printing it by the billions."

"Was that what happened to the Continental Congress?"

"Congress printed dollars at a fantastic rate in 1776. It seemed to work beautifully. They shipped it to the various states and they built forts, warships and mustered new regiments for the Continental Army. We were a dynamic new nation -- until we lost a couple of battles. Suddenly people started thinking that if we lost the war, these pieces of paper would be worth nothing. NOTHING. That's when our dollars started to depreciate."

"How could you tell that was happening?"

"The price of everything started to go up. Congress's answer in 1777 was to print more and more money to buy food and ammunition and clothing for the army and navy. That only increased the rate at which prices rose. People sensed the money was getting worthless. This is happening in America, right now."

"Did prices go up during the Revolution?"

"Did this have an impact on the war effort?"

"Did it ever. Almost all the men who volunteered for the army were paid a bonus to sign up. When the money started losing value, enlistments disappeared. The states had to start drafting men -- sometimes at the point of a gun. You can imagine what cheerful recruits they were. The only people who went willingly were black slaves who were promised their freedom if they survived. By 1782 one in every seven men in the ranks was black. A lot of the others were penniless old men and ignorant boys of thirteen or fourteen, who were hired as substitutes by the draftees."

"How did people react when they realized the Continental money was becoming worthless?"

"In New England, they tried to impose price controls on food and other necessities. Merchants were threatened with jail if they charged too much. It was a disastrous failure. In Philadelphia, the nation's capital, there were riots. Workmen wanted to be paid in gold, Spanish dollars, anything but Continental money. Pretty soon if a man bought a sick horse or a leaky boat, he'd say it 'wasn't worth a continental.' It was a way of describing something as worthless."

"Did this affect civilian morale?"

"That's much too tame a term. It destroyed patriotism in a lot of people. Every time they went to the market, they were reminded that their country was losing the war. It also had a terrible effect on personal relationships."

"How did that work?"

"If a man repaid a debt with a wagonload of worthless money, the creditor was not happy. He would consider himself cheated. Wives quarreled with husbands who accused them of spending too much money. Patriots like my brother-in-law, Fielding Lewis, went broke because they felt it was their duty to keep accepting continentals no matter how worthless they became. They even soured my relationship with my stepson, Jack Custis. Jack had inherited some of the best land in Virginia and Maryland. He started selling it for inflated Continental money to pay off gambling debts or buy a race horse he liked. He got so hard up, he bought cattle from Mount Vernon and waited months to let the Continental dollars to depreciate to utter worthlessness before paying me -- in effect cheating his stepfather. 'You might as well pay me in old newspapers,' I told him. I was very fond of Jack. I had helped to raise him. It was typical of the way inflation ruined family life."

"Do you think this could happen in today's America?"

"Once inflation cuts loose, it's like riding a crazed stallion. The creature is out of control."

"It's time to let our dollars act like real money. Let interest rates rise. This will help people realize we can't go on spending a trillion dollars more than we earn each year, simply by printing more dollars. As I see it, this is President Obama's chief task in the next four years. He's got to end the reign of make-believe money before it's too late."