Zoltan J. Acs is University Professor at the School of Public Policy at George Mason University and the author of "Why Philanthropy Matters: How the Wealthy Give, and What It Means for our Economic Well-Being," published by Princeton University Press. 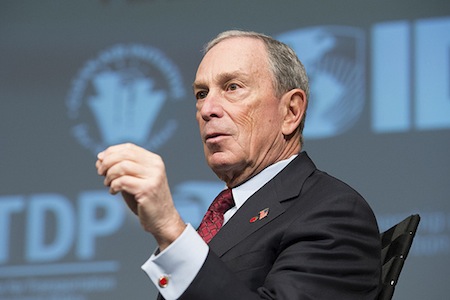 On Sunday, January 27, New York City mayor Michael Bloomberg announced his latest donation to Johns Hopkins University. His $350 million gift will be the largest in the university's history. Over the last four decades Bloomberg has given $1.1 billion dollars to his alma mater, a truly staggering amount of money. This makes him the most generous donor to any educational institution in the United Sates.

Reading Bloomberg's giving pledge letter sheds light on what he hopes to accomplish by giving money away. "If you want to fully enjoy life -- give. And if you want to do something for your children and show how much you love them, the the single best thing -- by far -- is to support organizations that will create a better world for them and their children. Long term, they will benefit more from your philanthropy than your will. I believe the philanthropic contributions I am now making are as much gifts to my children as they are to the recipient organizations." Bloomberg has set up a foundation to give away the bulk of his $25 billion fortune before he dies.

Despite the apparent generosity and real actions of philanthropists like Bloomberg, George Lucas and Paul Allen, much of the public reception to the philathropic initiatives of the superrich has been critical, often laced with cynicism about the motives of philanthropy and the extent to which philanthropy undercuts democratic processes. These attacks are misguided, however, because they fail to appreciate that philanthropy, far from being a new fad, is endemic to the entrepreneurial system from which it originated.

Consider, for example, a sermon that the Puritan leader John Winthrop delivered in 1630 on board the ship Arabella as it sailed to the New World. Winthrop’s shipmates in part were seeking refuge from religious intolerance. Appropriately, Winthrop’s sermon was titled “A Model of Christian Charity,” yet it laid forth a number of practical ideas about the necessity of industry and hard work, on the one hand, and the importance of frugality and humility, on the other.

These early colonists who came from England in the seventeenth and eighteenth centuries left a society that was on the cusp of experiencing an enormous burst of entrepreneurial activity, invention, and economic growth. But it was also a closed society, where the ability to participate was largely limited to those with land and title. This was most apparent in the landed aristocracy, with their vast wealth and disproportionate political influence. Yet even the great advances that would fuel the wool and textile industry in England benefited almost exclusively those with inherited lands who used this wealth to purchase inclusion in this period of entrepreneurial upheaval.

Thus, long before Andrew Carnegie proclaimed his so-called Gospel of Wealth, the Puritans and other early American colonists leaving Europe were laying an intellectual and moral foundation on which successive generations of enterprising Americans would build, helping to ensure that entrepreneurial profit seeking in the New World bore little resemblance to the entitled rent seeking of the Old World.

Through these values, the American experiment has triumphed on a balance between altruistic behavior and self-interest. Self-interest and altruism, though very different motives for human activity, are in fact fundamental traits of human nature and both are crucial to maintaining the strength and vitality of any society. Philanthropy is part of the implicit social contract that continuously nurtures and revitalizes a society.

For wealth to invigorate the capitalist system it needs to be “kept in rotation” like the planets around the sun, and for this task American philanthropy is very well suited. Examining the dynamics of American-style capitalism since the eighteenth century, philanthropy achieves three critical outcomes. It deals with the question of what to do with wealth -- keep it, tax it, or give it away. It complements government in creating public goods. And, by focusing on education, science, and medicine, philanthropy has a positive effect on economic growth and productivity. Individuals such as Benjamin Franklin, Andrew Carnegie, Bill Gates, Michael Bloomberg and Oprah Winfrey have used their wealth to establish institutions and promote knowledge, and philanthropy has given an edge to American-style capitalism by promoting vital forces -- like university research -- necessary for technological innovation, economic equality, and economic security.

Philanthropy is therefore an invisible, underappreciated force for progress in American-style capitalism -- the secret ingredient that fails to get mentioned in economic accounts of capitalism. Including it gives us a fuller, more realistic picture of capitalism, and therefore a better handle on how to govern it. We have to rethink the economics of capitalism to incorporate the role of philanthropy -- just as we did for entrepreneurship following Joseph Schumpeter -- if we are to create policies to promote its better aspects.

The essence of American-style capitalism is not a static Iron Triangle that balances the interests of large corporations and organized labor with the active intervention of government. Nor is it a rowdy free-for-all, where the interests of the many are readily subsumed to the acquisitive appetite of the few. Rather, American-style capitalism is a dynamic process by which opportunities create wealth that is in turn invested to create further opportunities.

The tension in American-style capitalism, thus, is not between the winners and losers. Rather, the tension is between enabling vast amounts of wealth creation for those who innovate and protecting opportunity for all Americans.