Two Chinese on a Mountain... 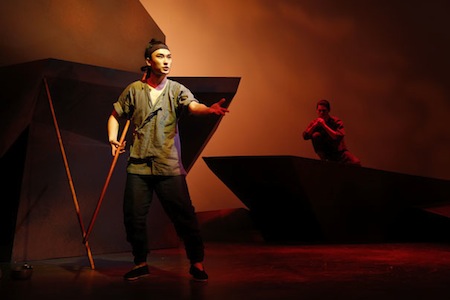 The play The Dance and the Railroad could have been a landmark drama about the role of the Chinese in the historic construction of the Transcontinental Railroad that connected the entire country by rail in 1869, but something went wrong.

David Hwang’s play debuted in 1981 and was a finalist for the Pulitzer Price and has been produced hundreds of times since then. Now, thirty-two years later, it has lost whatever punch it had when it opened.

The drama is the story of two Chinese workers on the railroad who are killing time on top of a mountain, pretending they are members of a Chinese opera troupe. All of the Chinese laborers are on strike to protest unacceptable conditions on the railroad, from long hours to low pay. The railroad, and strike, are hardly mentioned during the entire length of the play. Towards the finale, there is some discussion about the strike -- management wins -- and the two men now have to return to work.

It's pretty obvious that the men are pretending to be members of a Chinese opera troupe because it's escapism from the hard work of the railroad in the winter snow and ice storms of the mountains. But there is little to the story beyond that.hy Hwang tells audiences so little about one of the great transportation events of all time and one that was full of highly dramatic stories.

The Chinese who built the railroad through the Sierra Nevada Mountains accomplished something memorable.

The first transcontinental railroad, considered one of the great engineering feats in history, was a joint venture of the Union Pacific and Central Pacific railroads. The Union Pacific began in Omaha, Nebraska, working west and the Central Pacific started in Sacramento, California working east. Right away, to save money, the owners of both railroads hired thousands of Chinese immigrants, mostly from California, and paid them $5 a month less ($30 vs. $35) than their white workers. The companies provided food and shelter for the whites, but forced the Chinese workers to provide and pay for their own food and shelter. At times, between 80 percent and 90 percent of the workers were Chinese. They were small men, generally around 4’10” and 120 pounds, but they were industrious laborers. The Chinese not only drove the railroad through the Sierra Nevadas, but moved it through the Great Basin of Nevada until it met the Union Pacific at Promontory Point, Utah.

The Chinese worked through treacherous cold in the mountains and overwhelming heat in the desert. They risked their lives in the blasting and in being hauled up and down cliffs in flimsy baskets to set charges. In the summer of 1867, the frustration of the workers reached the boiling point and the Chinese went on strike, refusing to work for a week. The furious railroad tycoons threatened to replace them with newly freed slaves, who would work for even lower wages than they did. At the end of the week, the Chinese caved in. They did get a $5 per month raise, but still had to provide their own food and pay for their own tents.

There were a hundred good plays Hwang might have written about the building of the great railroad and the heroic work of the Asian laborers. His decision to ignore all of the drama and write about two wannabe opera singers is very questionable.

May Adrales, the director, did not do much with her actors, Yuekun Wu and Ruy Iskandar, who play Lone and Ma, the workers. The story drones on, as slow moving as the night breeze in the mountains, until the men have to go back to work and take one last poetic dance spin on the large, copper colored rocks. Wu and Iskandar are quite good throughout the play, with Lone a heroic and contemplative figure at the same time, but they are stuck in Hwang’s forgettable play.