The Modesty Wars: Women and the Hasidim in Brooklyn 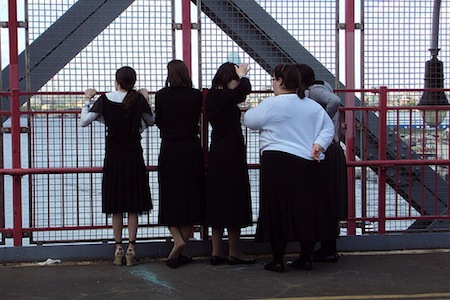 Until recently, you could have lived your entire life in the United States and never have bumped into any Jewish Orthodox Hasidim, who live in scattered communities, mostly in the New York’s borough of Brooklyn.

In the last few years, however, the media have publicized the Hasidim’s cultural clashes with their non-fundamentalist neighbours. In each instance, the conflict has pitted the Hasidic view of women’s modest traditional dress and their appropriate role in the family, on the streets, and in their community against the sexualized dress and behaviour of their neighbours.

The first widely-publicized controversy over women’s modesty occurred in the neighbourhood known as Crown Heights. On a warm, summer evening in the summer of 2010, Clara Santos Perez’s new and trendy kosher café, Basil Pizza and Wine Bar, was filled with Orthodox Jews from the Lubavitcher sect of Hasidim, West Indians, and the local young professionals who have gradually moved into the neighbourhood.  Classical music played softly in the background and the café seemed to reflect the peaceful multicultural neighbourhood of Crown Heights, Brooklyn.

But it didn’t last.

At 8:00pm, according to a New York Times magazine article, a young man “arrived and walked in with a young woman wearing a summery, skimpy dress and they took two of the empty stools at the bar, leaning in close to each other to talk.” Four more young people, wearing tank tops and miniskirts, soon arrived and drew severe stares, though they didn’t seem to notice them.

Clara Santos Perez, a devout Roman Catholic, worried whether angry Lubavichter Hasidim would confront her about the women’s immodest dress and behaviour. After the young people left, Rabbi Don Yoel Levy, who heads OK Kosher Certification, which is supposed makes unannounced kitchen inspections to ensure kosher kitchen practices, did in fact appear, and expressed concern about the “inappropriate attire and immoral behaviour at the bar.” Apparently, someone had called him to complain.

Many of the café’s customers want the cafe to be a cross-cultural experiment that brings together West Indians, young liberal professionals, and the Lubavitcher Jewish community, which settled there after the Holocaust had destroyed their European communities.

The Lubavitcher, however, feel that their neighbourhood is being invaded by people who do not share their value of female modesty. Since that cultural encounter, the community has wrestled with these problems largely through blogs and meetings meant to bring together the Orthodox, the young professionals and the West Indian groups.

The result is more of a stalemate, than genuine peace, especially as the growing Orthodox community seeks larger swaths of real estate. In an open letter to the community, one disgruntled Hasidic landlord described how young people had invaded and gentrified the Williamsburg section of Brooklyn and were now doing the same to Crown Heights. In his letter, titled “Take Back our Neighbourhood,” he wrote, “Young, upwardly mobile professionals may seem to be pleasant tenants who bring in reliable income, but they also introduce a very different way of life: new nightclubs and bars, sun tanning on rooftops, bike lanes and an increasing amount of immodesty on our streets. Some of these changes are hard to ignore; for instance, one of the sun tanning parties is visible for our young children to see from the window of a local school.”

The various Hasidim sects not only fear the immodesty of their neighbours; they also worry about the small but visible number of young Hasidim who pierce their ears, ride bicycles, dress as hippies, start punk bands and start theatre groups. Although their parents worry they are straying from the fold, one young man explained to the New York Times that both God and music bring light and redemption. He saw no contradiction between his music and his submission to his faith. “To me, Judaism is like punk rock,” he said. “Real Judaism is very much in your face. The world is chasing after desires for money and sex and drugs and materialism, and Judaism is the opposite. Judaism is like, this world is nothing. This world is only to serve."

One woman, told by a rabbi she could not perform in the theatre or sing, said, “I’m hitting these brick walls. ... I knew I can’t be a rabbi, I can’t be a cantor, I can’t be a singer. Where does that put me?" So she decided to form the Arts and Torah Association for Religious Artists, by and for Orthodox women. Their mission “is to promote creative and performing arts expression within the framework of Jewish religious law.” Through a journal, several conferences, and a variety of open-microphone performances, the association, though small, has spread to a variety of Hasidic communities.

An underground youth scene of Hasidim is slowing spreading through Brooklyn. The Hester Supper Club, founded by Orthodox women, provides kosher food and evening performances. One guest, quoted in The New Yorker, wrote, “As the night wore on, guests tossed back cocktails, swayed to the beat, and snapped iPhone pictures. They had the enthusiasm of any normal rock concert-goers, but they looked different. Almost everyone in the all-female crowd wore a long skirt and a sheitel, the wig customarily worn by Orthodox wives.” In Williamsburg, the Orthodox painter Elke Reva Sudin created a widely-publicized exhibition titled “Hipsters and Hassids,” “to help the two sides understand each other.”

Across Brooklyn, closer to Manhattan, lives a different Hasidic community in Williamsburg. Unlike the Lubavitcher Hasidim in Crown Heights, who seek to recruit other Jews into their orthodox community, the Hasidim in Williamsburg are extremely orthodox, and generally look away when you greet them.

Walk around Williamsburg on a hot, muggy summer day and you see men dressed in heavy, three-quarter length black wool coats, fur hats, and long socks tucked into black shoes. The wear long beards, and ringlets of hair curl down the side of their faces, (called peyes in Yiddish). The women, too, cover every part of their body.  They wear long skirts, topped by long sleeved, high-necked blouses, and dark stockings cover their legs. Depending on their specific Hasidic group, the married women shave their heads, wear wigs, or cover their hair with a scarf. Modesty, however, is not sufficient; bearing many children is viewed as women’s spiritual contribution to the community. Birth control is discouraged, but abortion is allowed if it saves the life of the mother. Trailed by large numbers of children, they look like they’ve just arrived, by time machine, from eighteenth-century Poland, which is, in fact, where they came from.

This is where another widely-publicized cultural confrontation over modesty recently took place. What happened is that Hasidic “modesty squads” confronted store owners about the “immodest” mannequins displayed in their store windows. One store owner told the New York Times in January 2013 that a Hasidic man came and said, “Do the neighbourhood a favour and take it out of the window. ... We’re trying to safeguard our community.” The store owner took the threat seriously because, in Hasidim Williamsburg, according to the New York Times, “it is a potent threat in a neighbourhood where shadowy, sometimes self-appointed modesty squads use social and economic leverage to enforce conformity."

In a 2005 Public Broadcast Network documentary of the Hasidim, called “A Life Apart: The Hasidim in America” interviewees explained that women must dress and behave modestly because their greatest spiritual mission is motherhood. Girls, therefore, are educated separately from boys and rarely study beyond high school. Parents arrange marriages, although children may refuse their choices and ask for different matches. Women often work outside the home, dressed in modest clothing, so that their men may study and pray all day.

The vast majority of Hasidim women however, do not view themselves as second-class citizens. One woman interviewed in the documentary explained why raising and protecting her family is her greatest joy. “Who cares about running Westinghouse?” she asked. “Children are your legacy forever.” Another woman pointed out that she finds her “spiritual fulfilment in motherhood, in raising children, teaching them values, and thanking God for the breakfast she has laid out for them.”

As the documentary concludes, “The Hasidic rejection of America’s popular culture and education has resulted in goals deeply desired by many Americans: stable families, strong communities and lives infused with meaning. In return, Hasidim pay a price most Americans would find too high: they adhere to strict rules of behavior; they live in a traditional society with clearly defined and prescribed roles for each member; and, within the Hasidic world, individualism is suppressed for the sake of community.”

Being part of this community means that Jewish law, as well as the will of their fathers and husbands, govern women’s entire lives. But equality is not their goal. For the most part, Hasidic women -- at least the majority who do not leave -- are satisfied to live in a stable community, dress modestly, raise their children, and work outside the home. It is in these closed and cohesive communities that they find spiritual fulfilment. It is here that they can avoid a secularized and sexualized America that celebrates individualism, materialism, and consumerism. And it is here, fortified by the Hasidic way of life, that they can avoid the consequences of modern life -- social isolation, family instability, lack of community cohesion, and a profound spiritual thirst.

Although it doesn’t provide the freedoms and opportunities enjoyed and valued by modern women, it is -- with all its rules and regulations -- their spiritual home.