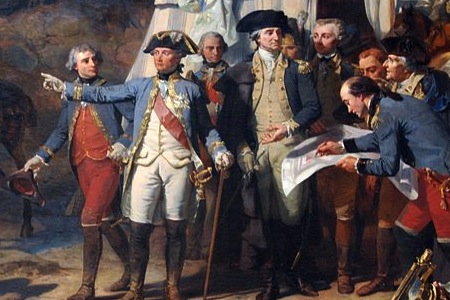 This article is adapted from Thomas Fleming’s new book, A Disease In the Public Mind – A New Understanding of Why We Fought the Civil War.

In 1775, not long after George Washington arrived in Massachusetts to take command of the Continental Army, he received a letter containing a poem, dedicated to him. In cadences that obviously reflected wide reading in the best English poetry of the period, the writer asked the goddess Columbia to bless the general’s struggle for his nation’s freedom. The last stanza was a climactic plea:

Proceed, great chief, with virtue on thy side
Thy ev’ry action let the goddess guide
A crown, a mansion, and a throne that shine
With gold unfading, WASHINGTON! be thine.

The poem had been written by Phillis Wheatley, who had come to Boston aboard a slave ship in 1761 at the age of seven. Bought by a merchant’s wife, she learned to read and write almost immediately, and began writing poetry at the age of 14. In 1773 she published a book of poems.

Washington thanked “Miss Phillis” for this “polite notice” of him. Whereupon he invited the young woman to visit him, if she should ever come to Cambridge. “I shall be happy to see a person so favored by the muses.” It requires a moment’s pause to realize the uniqueness of this exchange between a black woman and a prominent Virginia slave owner.

By this time, Washington had made a decision that would have historic implications for the future freedom of black American men and women. Although Southern congressman deplored the idea, he ordered his recruiting officers to accept free blacks in the Continental Army’s ranks. By 1781, one in every seven soldiers was black. Eighty-two years later, Abraham Lincoln would be encouraged by this little known fact to accept 200,000 black volunteers in the Union Army. He gave the pen with which he had signed the Emancipation Proclamation to George Livermore, who had recently published a history of blacks in the struggle for independence.

During the Revolutionary War, Washington developed a deep friendship with the young French volunteer, the Marquis de Lafayette. The idealistic nobleman spent large amounts of his own fortune to improve the lot of the often hungry and ragged American regulars. He also displayed courage on the battlefield. When Lafayette was wounded at the battle of the Brandywine in 1777, General Washington told an army doctor to care for him “as if he were my own son.”

Lafayette often talked with Washington about his detestation of slavery. The general may have been more than a little startled when the young Frenchman exclaimed during one conversation: “I would never have drawn my sword in the cause of America, if I could have conceived thereby I was founding a land of slavery.”

For George Washington, slavery remained a troubling question. But he saw his first postwar task the need to persuade America to approve a new constitution, creating a unique office, a president with powers coequal to Congress. For the next eight years, President Washington devoted himself to making this vision of a strong president into a working reality.

But slavery remained in the forefront of his thoughts about the future of the country. “There is not a man living who wishes more sincerely than I do to see a plan adopted for the abolition of slavery.” Washington told his friend, Robert Morris, America’s leading financier,

At Mount Vernon Washington refused to break up marriages by selling the husband or wife. He also tried to improve his slaves’ diet by giving them permission to hunt and fish and grow vegetables. Several owned boats and guns.

Washington was also ready to recognize talent and leadership among Mount Vernon’s blacks. He appointed several slaves as overseers of his outlying farms, and rewarded them when they did a good job. He remarked that one black overseer, Davy, “carries on his business as well as the white overseers.” Advertising for a good bricklayer, he told one man he did not care whether the artisan came from “Asia, Africa or Europe.”

No matter how much he grew in his appreciation and understanding of blacks as human beings, Washington remained convinced that slavery could not be abolished without endangering the still fragile American union. During the Constitutional Convention, delegates from South Carolina and Georgia had made it clear that if slavery were not recognized as a legitimate institution, they would go home and form a separate country.

As president, Washington became acutely aware that other concerns threatened the nation’s unity. When he declared America neutral in the war that erupted between England and Revolutionary France in 1793, Thomas Jefferson formed a pro-French political party. His followers were soon attacking the president savagely in newspapers and pamphlets. Angry mobs surged through the streets of Philadelphia to demonstrate in front of Washington’s residence. A Jeffersonian journalist offered a toast at a dinner to “the speedy death of President Washington.”

During these years, the Marquis de Lafayette became a leader in the revolution that transformed France. He bought a plantation in the French South American colony of Cayenne (later French Guiana) where he planned to purchase and free a group of slaves and educate them to demonstrate to the world that blacks could live and work independently He hoped Washington would join him in this enterprise.

The older man wrote his “adopted son” a letter, praising “the benevolence of your heart,” and warmly approved the experiment. But Washington did not accept Lafayette’s invitation to become his partner. Instead he mournfully wished that “a like spirit would diffuse itself … into the minds of the people of this country but I despair of seeing it.”

The cascade of violence and passion that the French Revolution unleashed in France as well as America soon claimed Lafayette as one of its victims. The Marquis’s property was confiscated and his plantation in Cayenne collapsed. He was forced to flee France, hoping to find refuge in America. But the Austrians, at war with the French, flung the Marquis into prison, and ignored Washington’s attempts to extricate him.

Lafayette’s fate played a part in Washington’s decision to abandon plans that he had been formulating to free Mount Vernon’s slaves while he was president. It would have been a huge public statement of his disapproval of slavery. Washington decided American voters could not deal with such an explosive topic when they were already deeply divided between pro- and anti-French parties. But he remained determined to make this statement as soon as he thought it could be done without endangering the American union.

During Washington’s retirement years, an English visitor to Mount Vernon discussed slavery with him, off the record. The ex-president told him no man in the nation yearned to see black bondage disappear more than he did. “Not only do I pray for it on the score of human dignity,” he said. “I can clearly foresee that nothing but the rooting out of slavery can perpetuate the existence of our union by consolidating it in a common bond of principle.”

In 1799, the ex-president dreamt was sitting with Martha, chatting about their happy memories when a “great light” suddenly surrounded them. From it emerged an angel who whispered in Martha’s ear. Martha suddenly turned pale and began to vanish from his sight. The obvious interpretation was Martha’s early death. But Washington told her dreams often have opposite meanings. “I may soon leave you,” he said.

Soon Martha came across scraps of writing in Washington’s study and she realized he was composing his will. The document began with a very predictable sentence. He directed his executors to care for “my dearly beloved wife Martha” for the rest of her life. The second sentence revealed why Washington had begun making his will in this secretive way. “Upon the death of my wife, it is my Will & desire that all the Slaves which I hold in my own right shall receive their freedom.”

Following that declaration were three pages of extremely explicit directives for the emancipation of his 123 slaves. He wanted them to be educated and trained to earn a living. In a South where many thought blacks should not be taught to read and write or worse, could not be taught, Washington was calling for their education. If Martha had not been alive, he would almost certainly have freed them all immediately. He only delayed their emancipation until her death because so many of his slaves had intermarried with slaves that belonged to her.

Six months later, in December 1799, Washington awoke with an alarming constriction in his throat, which made it extremely difficult for him to breathe. He asked Martha to send for their family doctor. But there was little the physician or other doctors he summoned could do with the primitive medical skills of their era. Already suffering from a bad cold, Washington had contracted an infection of his epiglottis, a cartilage just below his larynx. At the end of an agonizing day of struggling for breath, which he endured with remarkable stoicism, he died with Martha weeping beside him.

The news of Washington’s death fell like a thunderclap from on high across the entire nation. The loss was so huge, so absolute, it seemed to alter everything, from the nation’s politics to its confidence in the future. The fact that Washington had emancipated his slaves dwindled to a blip in the context of these other anxieties. His act of emancipation excited little or no comment.

Part of the reason may have been the fact that the slaves all had to remain at Mount Vernon until Martha’s death. There was no opportunity for newspaper stories of an exodus to freedom. At least as important, Martha Custis Washington made no attempt to publicize the will. She did not agree with her husband’s decision. Even if she had been inclined to free her slaves, she lacked the power. Her first husband’s will had stipulated that all his slaves were to become the property of their surviving Custis descendants -- Martha’s four grandchildren.

A year later, Martha freed all Washington’s slaves unilaterally, and allowed them to leave Mount Vernon. She acted on the advice of Bushrod Washington, her husband’s nephew, who had become a Supreme Court justice. Martha had told him the freed blacks were becoming angry over the long delay in their emancipation.

In spite of these complications, the fact that Washington had given unconditional freedom to every black man and woman in his power should not be forgotten. When we combine it with his other acts and statements witnessing his belief in black humanity and equality, he can justly be called America’s forgotten emancipator.