May 8: Victory in Europe Day 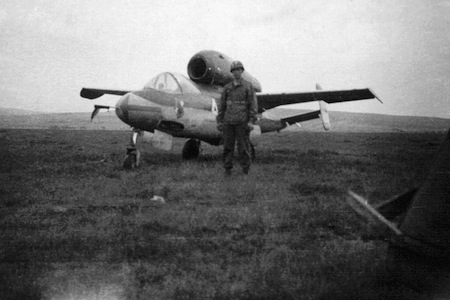 An American soldier with a captured Heinkel He 162 Volksjager in 1945. Credit: Wiki Commons.

In late spring of 1945, the conflict in Europe ended, not with a whimper but a bang. On April 30, Adolf Hitler put the barrel of a gun to his right temple and pulled the trigger. VE-day, May 8, 1945 soon followed as the Nazis agreed to an "unconditional surrender."

I was a pilot with the 404th Fighter Group located on an airfield near the small German town of Fritzlar. Our final combat mission had occurred several days earlier, over the outskirts of Prague, Czechoslovakia after which we were grounded out of concern for an unfortunate encounter with Soviet aircraft. Grounded and restless, our commanding officer organized a softball tournament between the three squadrons, the winning team awarded a week of R & R in London. Second only to VE-day, this was especially important to young fighter pilots as the young, lovely German frauleins were still considered the enemy and fraternizing could invite a court-martial. London ladies (so it was claimed) found American pilots especially attractive.

My team won. But as my fellow pilots headed west, I went east for temporary duty with an Air Disarmament Unit operating in what was to become, in less than three weeks, the Soviet Zone of Occupation. We were charged, not only to locate and destroy abandoned German military equipment, but to exploit whatever was considered of value to the Army Air Forces (AAF), of which advanced jet aircraft topped the list. (Rockets were also coveted by the AAF but had been found and shipped to the U.S. by an Army Ordnance team.)

My assigned duty lasted but a short two weeks but it revealed a desperate Nazi operation conceived by the Luftwaffe in the closing days of the Third Reich.

With an assigned jeep, a well-armed sergeant, and a young Dutch man as an interpreter, I was sent to check the area around Nordhausen on the edge of the Hartz Mountains not far from the Buchenwald concentration camp that had provided slave labor. There I discovered a large cavern with the entrance covered by a steel door as high as a second story building and about 30 feet wide. Entering through a side door revealed a production line running deep into the mountain of unfinished aircraft frames. I was told they were readied for jet-powered engines that never arrived. The aircraft, hastily designed and placed into production, was the Heinkel He 162, the "Volksjager," the "people's fighter," an aircraft version of the post-war German "Volkswagen."

The Volksjager, cheap to produce, (it was of wood literally glued together), powered with an untested jet engine, and armed with a pair of 20 mm canon, was a last desperate attempt to combat the British and American strategic bombing campaign that was pulverizing German cities. Pushed into production a mere three months after the first sketch was drawn, it was one of the "wonder weapons" to turn the war to Germany’s favor, so promised Nazi Propaganda Minister, Joseph Goebbels.

At this stage of the air war, with experienced German fighter pilots in short supply, who would have flown the "people's fighter" had they rolled off the production at four thousand a month as planned?

Trained with a few flying hours in gliders, (aviation fuel was in short supply) the pilots sent aloft to destroy the heavily-armed British and American bombers would have been members of the Hitler Youth, young lads (and probably some from the League of German Girls, the female wing of the Hitler Youth.) of fourteen or younger. (Fifteen-year-old German boys had been already been called up to serve in the army.)

Considering the vast range of Nazi fanaticism, the Luftwaffe’s Volksjager venture rates but a brief footnote in the history of the Third Reich. In contemporary Germany there must be former members of the Hitler Youth gratified that the leaders of the Third Reich chose to surrendered unconditionally on May 8, 1945.