Why Historians' Memoirs are So Valuable

James M. Banner, Jr., a historian in Washington D.C., is a co-founder of the National History Center. His latest book is "Being an Historian: An Introduction to the Professional World of History." 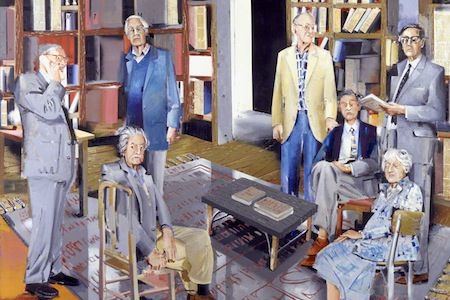 Historians of 'Past and Present' by Stephen Frederick Godfrey Farthing, 1999. National Portrait Gallery, London. John Elliott is one of the sitters.

Cross-posted from the Weekly Standard.

Historians’ memoirs have become a distinct subgenre of the memoir form. They’ve even been the subject of their own study: Jeremy D. Popkin’s History, Historians, and Autobiography. But why should historians’ memoirs be of interest to anyone, even to historians? Because, in addition to charting the life, thinking, and scholarly contributions of their authors, they shine light into historians’ practices, changes in historical thought over time, and the ways particular subjects metamorphose as new knowledge accumulates and generates new questions. They’re pieces of the history of historical interpretation—what we call historiography.

The name of John Elliott, the author of this memoir, is not likely to be widely known. Sir John is a kind of historian’s historian, a scholar who has made enormous contributions to historical knowledge without having developed much of a public following. Born and educated in Britain, and a member of both the Cambridge and Oxford faculties, he was also long resident in the United States at the Institute for Advanced Study in Princeton. His career exemplifies the increasing passage across the world’s oceans of scientists and scholars who hold membership in the international freemasonry of research and thought. He is also among the rare figures who seem both to sniff out intellectual changes in the wind before most others do so and then to embody those changes in their own work. His writings thus represent something of a mirror to their intellectual age: the past sixty years.

Like so many other historians’ memoirs, History in the Making is about its author’s intellectual journey, for it’s this journey that has left its mark on the world. The book reveals nothing about Elliott’s inner life and offers only those biographical details necessary to fulfill his intention, which is to set down one man’s effort to make sense of the past -- that is, to show, as he puts it, historical knowledge in the making. A scholarship boy at Eton, then a student at Cambridge, he was educated in the days when his alma mater’s history requirements were broad. He took an early fancy to seventeenth-century Spain and to its Catalan province, subjects little covered by British universities when he was a student. Encouraged to pursue his interests, this twentieth-century Protestant northerner found “intense personal enjoyment” in “the alien world of the Iberian peninsula.” He sensed, even when young, what usually proves to be true: that an outsider to any place and time can bring fresh perspectives to conventional thinking and insiders’ assumptions.

Elliott soon found himself, while struggling to master Catalan as well as the history of early modern Spain, embroiled in the intellectual politics of that region, where he resided and studied for a time. While historians may not live the boisterous lives of race car drivers or rock stars, their lives are not always filled with serenity and ease. Much of Elliott’s book is taken up with his struggles and frustrations in hunting down records of the century in which the Spanish empire faced off against Louis XIV’s France and the emerging British empire, as well as the struggles that Spanish historians (and occasionally Elliott himself) encountered under Francisco Franco’s rule. It’s a story of unremitting pursuit and, if not full triumph, at least enough success to lead, among many other books, to Elliott’s pathbreaking work on the Catalan Revolt of the mid-seventeenth century -- and to his later magisterial studies of the count-duke of Olivares and the British and Spanish empires in the three-and-a-half centuries after 1492.

Someone wishing to learn how historians go about their work, how they face and overcome obstacles, how historical knowledge can quickly flow over into current politics, and how accidents as well as planning affect their efforts will find much to learn here.

The story of the life and career that Elliott relates is also a work of history in its own right -- not in the conventional sense of an interpretation of parts of the past but, rather, of the history of the growth and transformation of the written history of Spain and its possessions over Elliott’s lifetime. To be sure, there’s much normal history here, too. Any reader will learn a great deal about metropolitan and overseas Spain during the past five centuries as Elliott takes us through the phases of his career by relating the development of the books he wrote, cowrote, and edited. But what that same reader will also gain is insight into how and why historical thought and interpretation change over time, especially in our era of fleet communication, easy international travel, and global interconnectedness. Elliott’s unassuming review of his influential histories surveys many of the historiographical themes that characterize his own and others’ works. What is astonishing about Elliott’s career is the number of these large issues and emerging scholarly approaches his own work advanced as he pursued his principal interests.

Elliott started out deeply influenced, as many historians continue to be, by Fernand Braudel’s histoire totale, a typically excessive French term for a genuinely powerful, if robustly contested, idea: that large forces, such as climate, geography, and deep enduring culture affect history more than individuals and passing realities like wars and regimes. Braudel’s example led Elliott to sidle from the history of one early modern nation-state into transnational history, the history of “international contacts at every level, and of the mutual influence and interplay of beliefs, values, cultural attitudes and political programmes between two or more societies.”

If going beyond individual nations and even regions to investigate the general forces affecting entire continents and large cultures (such as that of Europe) may now seem commonplace in historical thinking, it is due in part to Elliott’s own work.

As a scholar of Spain, Elliott was also unavoidably drawn into reflecting on the rise and decline of empires and came up against the problematic explanations given then, as now, about the likelihood of the end of imperial governance and influence. Here, again unavoidably, he found himself part of the community of historians, thinkers, and political figures concerned about the breakup not just of the long-past Spanish empire but also more recently of the British. Permeating this debate in the United States, of course, has been the question of the fate of the world’s single remaining imperial power. Elliott’s deft chapter on the rise and decline of nations, a chapter thus relevant to us all, is a model of its sort: balanced and open to the many factors bearing in upon the life of powerful imperial nation-states.

A similarly clear chapter on the challenges of comparative history -- of which Elliott’s major contribution has been Empires of the Atlantic World: Britain and Spain in America, 1492-1830 (2007) -- should be must-reading for anyone seeking an introduction to the way in which comparing two nations or empires can yield understanding that a focus on a single one cannot. I regret only that Elliott neglects to point out that comparative history can yield riches at many levels -- not just in the comparison of large entities like nations and empires but also of lesser and other things, such as two adjacent towns, different modes of portraiture, or competing manufacturing practices. As Elliott says, comparative history has not yet lived up to its promise; but it may do so if its subjects are broadened while its methods are retained.

You might think that contributions to transnational, imperial, and comparative history would be contributions enough. But then you would fail to take a true measure of Elliott’s reach. He has also written a work of the most traditional kind of history, a biography of Olivares. His large body of writings has influenced and become part of the somewhat overworked yet valuable library on Atlantic history, an international effort to write the history of the interactions of people, cultures, tribes, and nations on both sides of a single ocean, from the Arctic to the southern tips of Africa and South America. Elliott’s youthful fascination with the art of Velázquez has also taken him into cultural history and the history of art, about which he also writes here.

In none of these ventures has Elliott avoided identifying and trying to overcome the obstacles in his own and others’ paths. He is as candid about what he sees as the limitations of his own writings as he is critical of aspects of the larger historical enterprises in which he has been engaged. The book is thus a model of dispassionate reflection on one’s own life and work -- a book that, while putting himself, as a memoirist must, at the center of things, avoids the self-esteeming claims and overexposure of so many memoirs, even, occasionally, those of historians.

A memoir like this -- modest, unadorned, and candid -- does not, however, speak for itself. No memoirist can cover every topic he or she may wish, and, of course, most humans are incapable of understanding everything about their own lives. One topic that Elliott might have addressed -- and surely he is capable of doing so -- is the widely misunderstood matter of revisionist history. If we take the term at its capacious best, then Elliott has been a “revisionist historian” from the start, even if he doesn’t devote one of his limpid chapters to that fact. That is, he has altered existing interpretations of the Catalan and Spanish past, consequently challenging others to address his claims, and thus gathering controversy to himself.

Yet there is nothing unusual about this. Too many people associate the term “revisionist” with the left -- and, to be sure, the term originated in late-nineteenth-century German Marxist circles -- but, in fact, from the days of Thucydides, and from every point of the ideological compass, historians have tried to substitute their own views, findings, and arguments for those of their predecessors -- on the right, left, and in the middle. Most historians, as often unintentionally as by design, have therefore turned out to be revisionist historians. Revisionism is woven into the very fabric of what Elliott himself calls the “elusive enterprise” of trying to pin down the past. Both the delight and importance of historical knowledge is its being unendingly open to new ideas and visions—always unstable, and eternally open to debate.

Were some paradise of agreement about the past ever to emerge, we could be sure that humans had given up thinking. And thus, even a historian as noncombative and nonideological as Elliott has found his work entangled in intellectual and public politics. As Elliott writes, reflecting on both himself and his fellow historians whose work his own has challenged:

Because of the constant interaction between past and present, national historians consciously or unconsciously shape the image that nations have of themselves, and, by shaping it, become the largely hidden players in the unending drama of the politics of national identity.

This is the fate, and not an unhappy one, shared by all historians -- to be unwitting participants, sometimes contestants, in the enduring effort to make meaning of the past. This means always being stuck in the present and trying, through study of the past, to make sense of one’s own time, too.