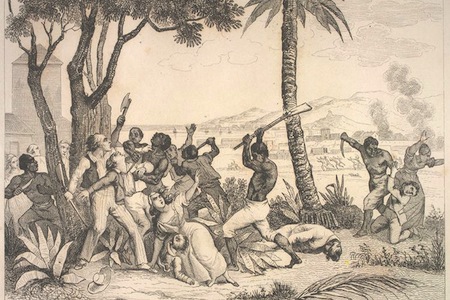 This article is adapted from Thomas Fleming’s new book, A Disease In the Public Mind – A New Understanding of Why We Fought the Civil War. Part two of a three-part series (read part one here).

In 1800, Thomas Jefferson was elected the third president of the United States. One of the new chief executive’s first visitors was Louis Andre Pichon, the affable young charge d’affaires of the new French republic that had emerged from their bloody revolution. Jefferson greeted him warmly as the spokesman for a country that had long stirred his deepest political emotions.

Pichon asked what the president would do or say if Paris sent an army to the rebellious island of Saint Domingue to restore it to French control. For over a century France had owned a third of the Caribbean island. The Spanish, who owned the larger slice, called it Santo Domingo -- the name that most Americans used. The French section's sugar, coffee and indigo plantations had made it France's most valuable overseas possession until the 1789 revolution in Paris freed the island’s 500,000 slaves and triggered a civil war that wrecked its economy.

Out of the chaos had emerged a gifted black leader, Toussaint Louverture, who was struggling to restore order and prosperity for both whites and recently freed blacks.

Jefferson’s reply exceeded Pichon’s most sanguine hopes. The new president urged Pichon to tell his government that America was eager to help restore French rule in Saint Domingue. He was pleased that France wanted to send an army to crush the black rebels. "Nothing would be easier than [for us] to furnish your army and fleet with everything and to reduce Toussaint to starvation," Jefferson said.

Soon a 20,000-man French army landed in Santo Domingo and a murderous struggle exploded between them and Toussaint’s supporters. The French captured Toussaint and shipped him back to France to die in a dungeon. Then a tiny buzzing creature, aedes egypti, the female mosquito whose bite inflicted yellow fever, began destroying the French army. After eighteen months of vicious no-quarter warfare, a ragged remnant of the once proud force retreated to ships offshore. A disgusted Napoleon abandoned his dream to reestablish the French empire in the New World.

A very angry black man, General Jean-Jacques Dessalines, marched his army across the island. He killed every French white man, woman and child, and declared himself leader of a new country, Haiti.

Dessaline’s bloody rampage was Thomas Jefferson’s nightmare -- a race war, The appalled president persuaded Congress to pass a resolution, refusing to recognize Haiti’s independence -- and barring all political contact with the new nation. But reports of the extermination of Haiti’s white population permeated the public mind of the American South.

For decades, on almost every road in every county below the Mason-Dixon Line, armed patrols, drafted from the militia, rode from midnight until dawn. They challenged every black man or woman they met, demanding to know where they were going and why. If they could not produce a letter proving they were on a legitimate errand, the patrol had the right to give them a dozen lashes. The goal was to prevent secret meetings between slaves from various plantations, possibly plotting a revolt. This was proof of how deeply the dread of a race war had permeated all levels of the white South’s society.

When Northerners, imbued with the conviction that slavery was a sin, called on the South to free all their slaves immediately, the Southerners reacted with rage and unspoken fear. In newspapers and pamphlets, they accused the abolitionists of wanting to inflict “another Santo Domingo” on them. The phrase recurred again and again, over the decades.

During these years, over 250,000 Southern blacks won their freedom. They never showed the slightest tendency to commit mass violence. On the contrary many of them prospered, mastering skilled trades such as blacksmithing and carpentering. Other black men acquired skills even though they remained slaves. One man became head of the biggest iron works in the nation.

There were a handful of slave revolts, inspired by the example of Haiti. But they were small and quickly suppressed. Often fellow blacks, loyal to kind masters, betrayed the rebels. Yet the fear of a slave revolt persisted. It had become a disease in the Southern public mind.

A climax came when the fanatic abolitionist, John Brown, raided Harpers Ferry, hoping to equip a slave army with the 100,000 rifles in the federal armory that was the town‘s chief employer. After Brown’s defeat and capture, federal troops found in his headquarters maps of the South, detailing the counties in which blacks outnumbered whites. With these maps were letters from wealthy Northern backers, approving his plans.

A minister in New Orleans preached a ferocious sermon, accusing Brown’s backers of hoping to inflict -- by now you can no doubt guess the words -- “another Santo Domingo” on the entire South. The speech was reprinted as a pamphlet and sold over 100,000 copies. Newspaper after newspaper repeated the cry in blazing editorials. The seeds of secession were beginning to flower.

By the summer of 1861, a Southern army awaited battle with a Union army in Virginia. The commander of the Southern army, General Pierre Beauregard, issued a statement hoping to rally soldiers and civilians. “A reckless and unprincipled tyrant has invaded your soil. Abraham Lincoln, regardless of all moral, legal and constitutional restraints, has thrown his Abolition hosts among you... All rules of civilized warfare are abandoned... Your honor and that of your wives and daughters are involved in this momentous contest.”

Here was Thomas Jefferson’s nightmare as a Confederate war cry.