Malcolm Mackay is a graduate of Princeton University and Harvard Law School. 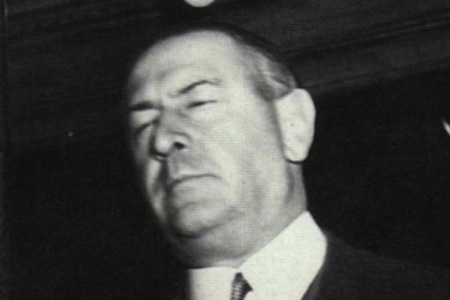 Richard Whitney being led away after his trial. Credit: AP/Kings Academy.

Richard Whitney was known as “the voice of Wall Street” while he served as president of the New York Stock Exchange during the early 1930s, as the country struggled through the Depression. In this capacity he became the leading opponent of federal regulations of the securities industry, testifying in Washington, speaking around the country (often broadcast on national radio) and even appearing on the cover of Time. Washington wanted to reform Wall Street, and Wall Street wanted to be left alone. With the passage of the Securities Act of 1933 imposing disclosure requirements on the financial industry, and the Securities Exchange Act of 1934 creating the Securities and Exchange Commission as the regulatory agency for the industry, Wall Street lost the battle. Washington ignored Whitney’s warning that creating the SEC would turn “Wall Street into an empty lot.”

The public Whitney was a poster boy for the old American establishment. While his family was a comfortable and old Massachusetts name, it was not wealthy, or particularly distinguished. His father had risen from a clerk at age seventeen to a successful importer and banker. Richard followed his older brother George to Groton School, Harvard, the college’s socially elite Porcelain Club, and Wall Street. George rose to head Morgan, while Richard was the bank’s primary bond broker. Both would marry wealthy women, very wealthy in George’s case, and own Manhattan townhouses and grand country estates. Richard would become president of one of his many clubs -- the Links -- and treasurer of the New York Yacht Club, as well as master of the fox hunt in Far Hills, New Jersey, where he had a 500-acre horse and cattle farm. At his twenty-fifth college reunion in 1936, he was elected the second most successful class mate, with top billing going to a well-known cartoonist.

Whitney's public image, however, did not reflect private reality. His classmates would learn, just two years later and to their total dismay, that they were wrong about Whitney. Everyone was. While the public man flourished, the private one self-destructed. He lived beyond his means, he borrowed more and more, he invested terribly.

Try as he might, Whitney simply couldn’t keep up with his cash needs. For many years, he had occasionally taken -- or borrowed as he may have thought of it -- securities from family trusts created by his late father-in-law. In early 1936, he went a step further. As a trustee of the New York Yacht Club, he also served as the club’s treasurer and broker, keeping its bond certificates in his firm’s safe. He pledged $150,000 worth of club bonds as collateral for one of his bank loans. Almost exactly a year later, he repeated this criminal action, but with $657,000 worth of bonds, and $221,508 cash, from the Stock Exchange Gratuity Fund (an insurance program to protect the families of deceased Exchange members), where he was also the broker as well as a trustee.

At the same time Whitney was borrowing from whomever would lend to him; he borrowed 111 times in one four-month period. It didn’t take long for his debts and embezzlements to catch up to him. In early 1938, he was convicted of embezzlement and sent to Sing-Sing.

By all accounts, Whitney was a model prisoner. He moved up from mop detail to teaching at the prison school and greeting new arrivals. Although forty-eight years old when he entered prison, he played well as first baseman on the school team with a mitt given to him by his old Groton headmaster. He was “Mr. Whitney” to everyone, fellow inmates and guards alike. Prisoners tipped their caps and stepped aside to let him pass.

Whitney, like Bernard Madoff more recently, could have lived well on his legitimate earnings. Power, money and social position were all his. Why did he do what he did? A panel of psychiatrists, who examined him before sentencing, found him “urbane and sportsmanlike,” “intelligent and mentally healthy” despite his admitting that he never thought about the ethical implications of his actions. The probation officer’s report, written at the same time, was more insightful, and continues to be a perceptive analysis of Whitney’s character and motivations:

…contributing factors in his delinquency are pride, obstinacy, unshakable belief in his own financial judgment, and a gambling instinct. ... Egotistical to a marked degree, it was apparently inconceivable that he, a figure of national prominence in financial circles and one whose judgment in economic matters was considered that of an expert, should prove a personal failure. ... Courage he possesses to an unusual degree. He also possesses a certain gentlemanly code of honor. Combined with this he has a sustaining savoir-faire and a Spartan-like spirit of fortitude, which enables him to maintain unflinchingly his self-composure in the face of his present humiliating predicament.

My book, Impeccable Connections, is the story of Richard Whitney, whom I knew when I was a boy and a young man, and have thought about all my life.

Could a Whitney-like character be found on Wall Street today?

Does a cat have whiskers?