How Did the IRS Get Investigatory Authority, Anyway?

Douglas M. Charles is Assistant Professor of History at Penn State University, Greater Allegheny. He is author of "The FBI’s Obscene File: J. Edgar Hoover and the Bureau’s Crusade Against Smut" and "J. Edgar Hoover and the Anti-interventionists: FBI Political Surveillance and the Rise of the Domestic Security State, 1939-45." 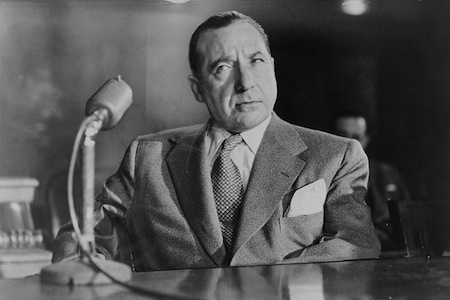 The IRS "scandal" involving the “targeting” of conservative Tea Party groups is metastasizing. Congressional Republicans are seeking to open a broader investigation into the agency, with which, according to the New York Times, they "hope to ensare the White House."

An early foreshadowing of problems to come came in 1942. Morris Ernst -- a lawyer, co-founder of the American Civil Liberties Union, and political ally of FDR -- suggested that the attorney general conduct “aggressive action” in the form of tax return audits to go after anti-interventionist groups. To his consternation, no one in the Roosevelt administration was interested in the idea. Even J. Edgar Hoover’s FBI, an organization heavily involved in monitoring and attempting to discredit President Roosevelt’s foreign policy critics, avoided it because using tax records was too public and, hence, too risky

By 1951, the IRS’s responsibilities began to morph and it started to tackle new issues such as organized crime. Early that year, the Kefauver Committee, which was established to look into issues involving organized crime, criticized the IRS for failing to enforce tax laws in this area. As a result, the IRS moved headlong into investigating racketeering, making use of a federal wagering tax law in an attempt to cut into the revenues of the Mafia itself.

When Dwight Eisenhower became president, IRS funding was reduced and the agency had to cut back on its organized crime investigations. But after 1957 and the infamous bust of leading Mafiosi during a summit meeting in Apalachin, New York, the IRS resumed its work in racketeering cases. The IRS’s intelligence function was centralized with the new Kennedy administration’s focus on organized crime. IRS agents would henceforth make use of paid informants, undercover agents, and electronic surveillance (i.e. wiretaps), all of which led to abuses. Most of the scandals under Kennedy were initiated improperly by the IRS’s coordinator for organized crime.

It was also under the Kennedy administration that IRS officials resumed, albeit indirectly, catering to the political interests of their superiors. In November 1961, President Kennedy criticized the extremist John Birch Society and the virulently anti-communist Minutemen, but noted that as long as they followed the tax laws of the United States the federal government could not interfere with them. He added as an aside, however, his confidence that the IRS investigated tax law violations. This public statement led IRS officials to create in 1961 a so-called "test audit program" of political action organizations. Looking at both right and left-wing groups, the IRS sought to determine if the groups’ activities warranted their holding tax-exempt status. By 1963, IRS officials planned to expand the program to include 10,000 tax-exempt organizations “of all types” with the backing of the president. But the effort never really got off the ground and ultimately died when the White House lost interest in the issue. When investigating this, the Church Committee found no serious abuses except insofar as the IRS was bending to political pressures.

By 1969 the IRS bureaucracy expanded to include something called the Special Service Staff after Congressional committees and the White House expressed discontent that large political groups were not obeying tax laws. President Nixon’s aide Tom Charles Huston -- the man whose failed plan to coordinate intelligence operations in the White House led to the formation of the White House plumbers and hence Watergate -- suggested that Nixon use the IRS to target left-wing groups to see if they were complying with tax laws. This Special Service Staff, under pressure from the White House, created a special office to look at “activists” and “ideologies.” The Staff had lists of activists that they received from the FBI and Justice Department and they targeted political groups for audits based on political activities. In doing this, they bypassed normal IRS procedures. Some 8,000 individuals and 3,000 groups were targeted secretly by the IRS not for tax law violations but for engaging in First Amendment-protected political activity. Targets included the Ford Foundation, the Head Start Program, and the Urban League. The Special Service Staff was abolished only in mid-1973, when it was discovered by incoming IRS commissioner Donald Alexander.

By 1969 the IRS Intelligence Division, after years of targeting organized crime, began targeting political corruption and gathered information beyond violations solely of tax law. Under Operation Leprechaun (named for the green ink in IRS informant files), the Justice Department and IRS agents investigated political corruption in Florida and collected information on the sexual and drinking habits of targets, used illegal electronic surveillance, and broke into the office of a congressional candidate to remove tax-related records. This all occurred, the Church Committee concluded, as a result of a lack of oversight within the IRS and the lack of a system of controls in their use of informants.

Beyond these serious IRS scandals, tax return information was also freely shared with both the FBI and CIA, who wanted the information to discredit targets. FBI officials requested about two hundred separate tax returns for use in their illegal COINTELPRO operations. Under the FBI’s Key Activist Program, FBI agents acquired the tax returns of dozens of New Left activists, and the IRS asked for no explanation as to the FBI’s interests or plans. FBI officials wanted to have those activists who failed to pay taxes face “considerable consternation, [and] possibly jail sentences,” including a college professor in the Midwest whom FBI officials feared would lead protests.

FBI officials also targeted Martin Luther King, Jr., and his Southern Christian Leadership Conference via the COINTELPRO. They hoped to use the IRS’s list of SCLC donors to send them phony SCLC letters warning that the organization was being investigated for tax fraud. This, they hoped, would dry up the funding of King’s group and thereby neutralize it. Students for a Democratic Society was similarly targeted, but because it had not been granted tax-exemption status the IRS donor lists could also be released to the Nixon White House.

Even the CIA (illegally) received IRS tax information though non-official channels that it would use to its advantage. CIA officials were interested in the tax returns of Victor Marchetti, a former CIA agent turned critic of the agency. They were also interested in the returns of Ramparts magazine, which was writing exposes of CIA activity. Wanting this information had only one purpose: discrediting critics.

In today’s IRS brouhaha, the issue is the so-called “targeting” of conservative Tea Party groups who sought and were granted tax-exempt status. Groups that win tax exemption are not permitted to engage in politics, but they can be “social welfare” issue groups who can keep their donor lists confidential. The IRS, indeed, has a fiduciary responsibility to investigate those applying for tax-exempt status to determine if they meet the legal requirements.

But in today’s IRS "scandal," the IRS was not investigating groups that already had tax-exempt status, nor was the agency sharing their information in order to discredit their political agenda, nor were the Tea Party groups facing potential jail time. The IRS was merely giving extra scrutiny to the virtual explosion of potential-501(c)4 groups that were created after Citizens United.

Representative Elijah Cummings of the House Oversight Committee called the IRS’s actions “one of the most alarming things I have ever seen.” Compared to the very serious IRS scandals of the past, it’s difficult to see the current one in this light.