A New Way to Look at America's Wars

This article is adapted from Thomas Fleming’s new book, A Disease In the Public Mind – A New Understanding of Why We Fought the Civil War. Part three of a three-part series. 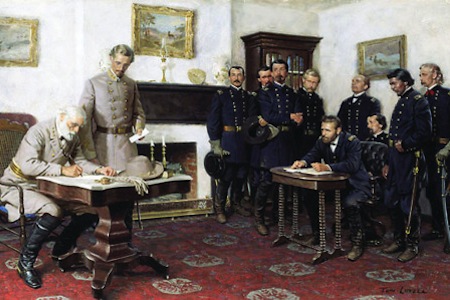 From my early days as an historian, I have always looked for insights that explain the past on a deeper level than a series of merely exciting or disturbing events. I still vividly remember my first experience. I was working on a book about the year 1776 and had file drawers crammed with research. But I felt the need for something fundamental, a pattern of thought that drew the narrative together in a new, more meaningful way.

Suddenly the words swarmed into my mind: 1776: Year of Illusions. It was my first encounter with what I now call a disease in the public mind.

The Americans began this crucial year convinced they were going to triumph in one big battle, called in the eighteenth century a “general action.” Assurances from Tom Paine had convinced the Continental Congress that the British were virtually bankrupt and could not afford to send big army and fleet to America. The politicians told George Washington he did not need a large regular army. When the British arrived, he could summon a huge number of part-time soldiers – militia -- who would overwhelm this puny force of redcoats.

Congress claimed that this strategy had worked perfectly in the battle at Concord Bridge on April 19, 1775, and during the British retreat to Boston. These optimists forgot that the men who fought that day were an embryo army who had been training for almost a year.

This illusion became a near fatal disease in the American public mind. The British sent the largest army and fleet they had ever shipped overseas to suppress the rebellion. In the first two battles, they routed General Washington’s largely untrained army. Discouraged American regiments and companies started going home. Panicky generals and colonels began discussing surrender.

General Washington kept his head. He wrote a letter to the Continental Congress. Henceforth, he told them, “We shall never seek a general action or put everything to the risk. Instead we shall protract the war.” The struggle lasted another seven often discouraging years. But this bold reversal of the war’s strategy proved to be the key to victory.

This experience persuaded me to take a similar approach to other American wars. In my essay, Who Sank The Maine? recently reissued as an ebook, I rejected the longstanding assumption that the American battleship, the USS Maine, had been sunk in Havana harbor by Spanish saboteurs. After months of research, I decided the saboteurs were almost certainly Cuban rebels, who secretly hated Americans but wanted to lure them into a war with Spain to win Cuba’s independence.

The staffs of the two most powerful newspapermen of the day, Joseph Pulitzer and William Randolph Hearst, created the atmosphere that enabled this murderous deception to succeed. They were both trying to build circulation with lurid mostly fictionalized descriptions of Spanish atrocities against the Cuban rebels. They portrayed the rebels as on the brink of victory. In fact, their army had all but evaporated, as we ruefully discovered after we declared war.

I found a similar process of deception and illusion at work in World War I. In my book, The Illusion of Victory, I tell how President Woodrow Wilson and his foreign policy advisor, Colonel Edward House, were deceived by British propaganda into believing the Allies were close to victory in 1917. Wilson persuaded Congress to declare war on Germany on the assumption that America would only have to give France and England generous loans and some naval support.

The President hoped to become the dominant force at the ensuing peace conference. He believed that he could persuade the world’s leaders to accept a “peace without victory” and create a League of Nations that would prevent future wars. Wilson had the illusion that noble ideas, spelled out in stirring speeches, could change the world.

When an army major from the War Department went before Congress to ask for an appropriation of three billion dollars, the Democratic leader of the U.S. Senate was astonished and asked how the money would be spent. The major detailed the need to build training camps and buy weapons and uniforms for a rapidly expanding army. Then he nervously added: “And we might have to send some troops to France.”

“Good God,” the senator exclaimed. “You’re not going to send soldiers over there, are you?”

A month later, British and French military missions arrived in Washington DC. They revealed that it was Germany, not the allies, who were close to victory. “We want men,” they told the dismayed President Wilson. “Men, men, men!”

By the time war ended, almost 100,000 Americans had died on the battlefield. In 1930, the Veterans Administration concluded another 350,000 men had died from wounds and the aftereffects of poison gas during the next ten years. At the peace conference, France and Great Britain dismissed Wilson’s vision of a “peace without victory” and fastened a vengeful treaty on Germany that contained the seeds of World War II.

Similar illusions preceded our entry in World War II. In my book, The New Dealers’ War, I described how President Franklin D. Roosevelt struggled throughout the year 1941 to change American voters’ resistance to becoming involved in another war in Europe. Roosevelt decided to take the advice of his Interior Secretary, Harold Ickes, and enter the war through “the back door.” He suspended oil shipments to Japan, which was at war with China. Soon tensions between Washington and Tokyo were at an all time high.

Roosevelt and his advisors were unworried. They were convinced that the Japanese war machine was a joke. If Japan attacked an American warship or possession in the Pacific, such as the Philippines, Tokyo could be defeated in six months. Then the Americans would turn their attention to the far more menacing German war machine,

After Japanese planes devastated the U.S. Navy at Pearl Harbor on December 7, 1941, Secretary of the Navy Frank Knox visited the president. He found Roosevelt white-faced and horrified. “He expected to get hit, but not hurt,” Knox later told one of his aides.

Roosevelt responded by declaring that unconditional surrender would be the only terms on which the Allies would negotiate peace with Germany and Japan. The British were appalled. Their historians told them that no nation had demanded unconditional surrender for more than 2000 years. Generals Eisenhower, Marshall and other American military leaders also disapproved. They were certain the policy would prolong the war – which it did.

In late 1944, Roosevelt sailed to Hawaii to confer with military leaders about the war with Japan. Aboard ship, reporters asked the president if he still insisted on unconditional surrender. Roosevelt said yes, of course. It was a great American tradition.

When Robert E. Lee met Ulysses Grant at Appomattox, Roosevelt told the reporters, “Grant said: ‘The terms are unconditional surrender.’” Grant said no such thing. But not a single reporter challenged the president.

In 1945, when Roosevelt died of a stroke and Harry Truman became president, Germany was close to surrender. Truman decided unconditional surrender no longer made sense for Japan. The Japanese fleet had been annihilated; their cities were exposed to relentless aerial attack. It was time to negotiate a realistic peace.

The Roosevelt cabinet told the new president if he abandoned unconditional surrender, he would destroy the Democratic Party. Trapped by this passionate reaction, Mr. Truman decided the atomic bomb was the only solution that made sense. So the bomb fell.

Three years ago, I decided to apply this approach to the bloodiest conflict America has ever fought – the Civil War. There I found the phrase that best described the insights I had experienced while studying our other wars. I used it for the title of my book -- A Disease in the Public Mind.

In the sixty years before the war exploded, distortions of reality rooted in hatred and fear seized the minds and hearts of tens of thousands of Americans. In the North hatred of slavery and slave owners gradually became a paranoid belief in the machinations of “The Slave Power.” In the South it was “Thomas Jefferson’s Nightmare” – the fear of a race war. The confrontation between these two distortions of reality killed a million young men.

President Abraham Lincoln had a solution that might have avoided this holocaust – gradual, compensated emancipation. But he could not persuade either side to accept it. The grip of their opposing diseases of the mind was too strong.

Only in the war’s closing days was Lincoln able to demonstrate his desire for a peace of reconciliation. Some hate-filled abolitionists demanded that the President impose unconditional surrender on the Southern Confederacy. Lincoln refused to do so.

General Grant was obeying Abraham Lincoln’s orders when he offered General Lee honorable terms at Appomattox. As I wrote that unforgettable scene, I felt my career as an historian had come full circle.