Carole Emberton teaches history at the University at Buffalo (SUNY). Her first book, "Beyond Redemption: Race, Violence, and the American South after the Civil War" was published by the University of Chicago Press in June. 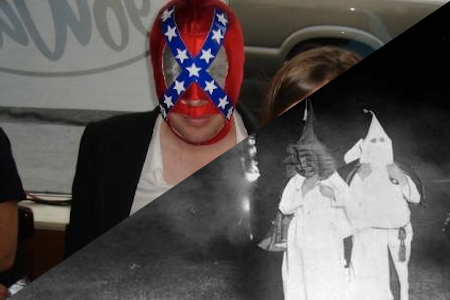 Last week, Kentucky's junior senator, Rand Paul, came under fire yet again because it was revealed that his social media director had an alter ego known as the "Southern Avenger" -- a Confederate mask-wearing, John Wilkes Booth-admiring, Abraham Lincoln-hating blogger and radio personality who defended secession as the ultimate form of resistance to the centralization of government power. When he was not busy judging wet t-shirt contests, Jack Hunter, aka the Southern Avenger, was writing essays with titles like "John Wilkes Booth Was Right," which outlined Hunter's belief that honoring the nation's sixteenth president was akin to "worshipping Satan" and how "the Founding Fathers most likely would have snatched Lincoln up by his beard and hung him from the nearest tree." Paul dismissed Hunter's embarrassing utterances as nothing more than youthful indiscretions, never mind that he was a college graduate when he became the Avenger and that his praise for Booth came only nine years ago when Hunter was a wee thirty. In his own defense, Hunter explained he was a "shock jock" paid to be extreme. "There's a lot of people who write in print and radio that go out and beat their chests and try to just say the craziest things they can because that's how you make a living," he explained. He also recanted some of his admiration for Booth, saying that he no longer believed assassinating a president was right "unless it was somebody like Adolf Hitler." (Never mind that President Obama is routinely compared to Adolf Hitler by the far right these days.)

It’s difficult to take a man who wore a bedazzled Mexican-style wrestling mask of the Confederate flag seriously. His writing reads like a bad undergraduate paper -- the kind where the student didn't actually do the reading but manages to stitch together some sentences that are for the most part grammatically coherent but the ideas are, well, less than adequately developed. Paul claims not to take him seriously, and even Hunter himself asks us not to ... kind of. Lest the Southern Avenger persona wholly be dismissed as a performance and Hunter as an actor, or worse, a liar, or worst, a satirist, by those on the far right for whom such vitriol is their bread and butter, Hunter makes a final plea on behalf of his own sincerity. "For a while that's how I made a living," he says. "And it's not that you don't mean it -- it's just you express it in ways that does more harm than good."

Jack Hunter has pulled back the curtain of "libertarian populism" to expose the white supremacist engine that is still chugging away in this supposedly post-racial America. Like the Wizard of Oz, Hunter is asking us to look away and ignore the man with the Confederate mask, but we should resist the urge to dismiss him as a kook for two reasons.

First of all, he's hardly alone. Just last week a Tea Partier unfurled a Confederate flag in the middle of a school board meeting in Springboro, Ohio, when the board cancelled a proposed class on the U.S. Constitution because of concerns that it contained too many religious overtones and promoted Tea Party ideology. "This is your heritage!" the man exclaimed as he waived the flag around the room. Last year, a Tea Party-sponsored float flying the "Stars & Bars" won the $1,000 first-place prize in the Las Cruces, New Mexico, Fourth of July parade. A quick Google search for images of Tea Party rallies will bring forth of bounty of additional evidence of the libertarian love for the South's Lost Cause.

Secondly, the Reconstruction-era Ku Klux Klan, the original southern avengers, wore masks, too. A lot of folks at the time also thought they were silly, until the bodies started piling up. As historian Elaine Frantz Parsons points out, although there was always something "carvnivalesque" to their costumes and behaviors, the post-Civil War KKK turned exaggeration to their own benefit, in effect using their fantastical appearance as insulation against their real purpose: political terrorism. White southerners and some northerners, too, could laugh at the idea of grown men pretending to be ghosts, running around in sheets, even putting sheets on their horses, and scaring supposedly superstitious freedpeople and nefarious "carpetbaggers." The comical obscured the critical threat the Klan posed to efforts to form bi-racial political coalitions as well as anything resembling free labor in the former Confederacy.

Some people undoubtedly choose to wave Confederate flags just to get attention. But what binds the Hunters of today to yesterday's Confederates is not so much an abhorrence of centralized state power as it is a fear of change. In the mid-nineteenth century, American slaveholders sensed the tide of world history slowly beginning to surge against them. They embraced strong federal authority so long as it protected their slaveholding interests, but when they felt their grasp on the national body politic beginning to slip, however slightly, with the election of Abraham Lincoln, they set out to build an independent slaveholding republic where their political and economic dominance would not be challenged. Today’s libertarians for whom Rand Paul, Hunter’s boss, has become the messiah, fear the changing racial demographics of the United States. As Paul Krugman demonstrates, the Hunters and Pauls of this country are guided by the "delusion" that there are millions of untapped, disillusioned white voters out there who can be mobilized for 2014 and 2016. All evidence to the contrary, they believe that these elusive white voters can be reached with the right message, and it's for them that they don their masks and wave the Confederate flag. Like the would-be Confederates of 1861, the would-be Confederates of 2013 cannot reckon with the world as it is but instead attempt to remake the world as they wish it would be.