A Scorching History of Rape in America 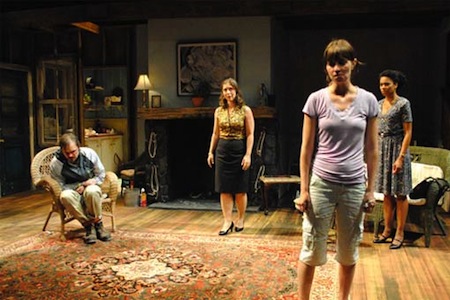 The first seventeen minutes of Bill Mastrosimone’s savage play Extremities keep theatergoers on the edge of their seats. A stranger invades the home of a young woman he knows is alone and attempts to rape her. He is kneeling over her on the living room rug, his thick legs pinning her to the floor, his hands ripping at her clothes. She utters ear splitting screams of terror, flails her exposed legs wildly in the air and begs for her life.

Then, suddenly, she is able to reach for a can of bug repellent and sprays her assailant in the face, disabling him. She springs to her feet, gets behind him and, before he can recover, ties him up. She tosses him into her empty fireplace, ties the iron grill to the wall and holds him captive, determined to kill him in revenge for what he did to her.

Extremities is a superb play about sexual history. It debuted in 1983, and yet today, on its thirtieth anniversary, is as popular as ever. It has been produced hundreds of times all over the country and terrifies people today as it did in the first years of the Reagan Administration.

Mastrosimone’s brilliant play, whose title role has been taken on by many famous actresses, starting with Farrah Fawcett, is today not just a searing drama, but a good study in the history of rape.

Over the last two decades, the American national crime rate has fallen by nearly one third and there are about forty per cent fewer murders. Rapes have fallen by nearly 20% and, law enforcement officials say, more women report rapes and attempted rapes.

That is the difference between today and 1983, when the play debuted. Then, as the women in the play say, any woman who said she was raped was charged by police, and even family and friends, with dressing provocatively, or luring her attacker into her home, or saying something suggestive. The women in the play tell their roommate, the victim, that the intruder will lie to the police and, seeing all the cuts and bruises on him, will instead arrest her. One woman even said that if she killed the man in self-defense she would go to prison for the rest of her life.

How could the attempted rape in the story be proved? It would be a man’s word against a woman’s and everybody would believe the man – in 1983.

Well, today rape and attempted rape can be proved, and often are. Today, unlike 1983, DNA tests would show an attacker’s DNA all over the woman victim in this play. Doctors trained to spot rape or attempted rape would look for signs of bruises on certain parts of her body, tears in her clothing, hair samples, the angle of blood splatter and take blood tests.

Today, hopefully, the victim in the play could employ any number of defensive strategies to save herself from a rape not available in 1983 that have helped to drive rapes down. Women attend specially designed martial arts type training session to learn how to protect them from an attack. Many women carry cans of mace spray, guns and knives. Women today have cell phones to make a fast 911 call or can text message for help. Car windows can be closed and cars locked automatically, unlike thirty years ago. Today, interior and exterior cameras on streets, in stores and in some homes identify rapists. The “nanny cams’ catch attacks. Television shows air footage of suspects and the public identifies him. Women can use cell phone cameras to capture pictures of their attacker and send them to police.

Today, police, friends and neighbors are far more willing to believe a story about a rape, or attempted rape, from a woman than thirty years ago.

That happens because Extremities has been seen so often. It is good and the cast that I saw in this production of the play in Stockbridge was very talented. This is an actors’ play, an ensemble actors’ play, and any one weak performance kills the entire endeavor. There is no weakness here. Molly Camp is wonderful as the victim, Marjorie, whose friends turn on her right away when she reports the attack. She is a frail, scared young woman who becomes empowered by the attack. Her friends Terry (Kelly McCreary) and Patricia (Miriam Silverman) change as the play continues. They spout the usual lines that she lured him into the house and that she was always parading around the house half naked when their boyfriends were around. They grow into strong accomplices with her. James McMenamin is powerful as the assailant, Raul, who, when captured, becomes unbelievably manipulative of the two roommates in order to get released.

Director Karen Allen has done a fine job of staging a striking and gut-wrenching drama.

Despite all of the methods of protection in place today, and a better understanding of rape, thousands of women are still assaulted each year. Rape in the military has become a scandal. Only 41% of rapists are caught; less than five per cent spend any time in jail. Rape has always been, and still is, a national tragedy.

Extremities has helped to bring rape to the public eye in the history of the last three decades, but much more needs to be done to protect women.