John W. Johnson holds the Ph.D. in American Studies from the University of Minnesota. He is a professor of history at the University of Northern Iowa where he regularly offers courses on recent U.S. history, constitutional history, and a core curriculum course, “Analysis of Social Issues.” Johnson has published extensively on the history of American civil liberties. 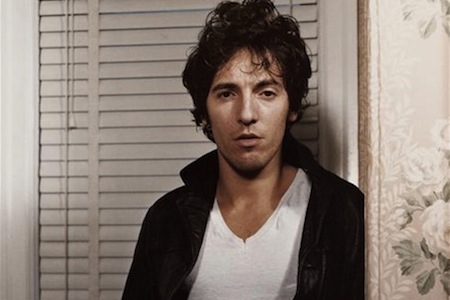 Where this summer can you see a man just dumped by his girlfriend receiving a consoling ovation from 20,000 people? Or where can you find video footage of a street musician jamming with an international rock star? And where can you eavesdrop on a working class couple dancing to a CD in their kitchen, possessing few creature comforts but happy in each other’s arms?

Only in the just released documentary film Springsteen and I, directed by Baillie Walsh and produced by Ridley Scott.

This stirring film, rather than dwelling on Bruce Springsteen himself, is structured around crowd-sourced videos sent by fans answering a call to offer testimonials of their affection for Springsteen and his music. Ultimately, over 2,000 videos found their way to the film’s producers, but only about three dozen survived the cutting room floor. The selected videos are interspersed in the film with footage of Springsteen concerts dating back to the mid-1970s. There are, however, no pedantic talking heads: this is the fans’ take on Springsteen, not that of musical experts or history professors. Fans of Springsteen will have to look elsewhere for a comprehensive examination of their hero’s life and music.

What could persuade thousands of men and women, of various ages and nationalities, to send gushing fan videos to a bunch of strangers? Devotees of the man affectionately called “Bruce” (the sobriquet “The Boss” is seldom used by true fans) attempt to answer this question directly in their videos.

In a forty-year career as the front man for the E Street Band, Springsteen has written over four hundred original songs and released eighteen studio albums. Included in the Springsteen discography are his debut album Greetings from Asbury Park (1973), his classic Born to Run (1975), the powerful Darkness at the Edge of Town (1978), his stark Nebraska (1982), the angry Born in the USA (1984), the historically resonant The Ghost of Tom Joad (1995), the elegiac The Rising (2002), and last year’s bitter lamentation on the Great Recession, Wrecking Ball (2012). Clearly Springsteen has swaggered through countless musical genres and phases. A case can be made that no popular American musician boasts as eclectic a body of work as Springsteen. In addition, of American singer/songwriters of the last half century, only Bob Dylan’s career has spawned more book-length academic studies.

As a performer, Springsteen is legendary for frenetic three-hour (and, occasionally, four-hour) concerts. When the E Street Band comes to town -- whether in American arenas or international venues -- blue-collar workers and A-list celebrities vie for places in crowd.

So, how successful is Springsteen and I as a documentary film? Most of the video segments have not been slickly enhanced or packaged by the director and the editors. So there is a compelling rawness, for example, to an Elvis impersonator upstaging Springsteen at a concert in Philadelphia. A short clip from a middle-aged Danish woman with a charming accent is especially poignant. A long-haul truck driver testifies as to how Springsteen helps her pass the time on America’s highways in search of the promised land that her idol extolls. A common thread in the video segments is that Springsteen’s refrains and anthems have helped his fans survive personal hardships.

But some of the videos are embarrassingly awkward. In one, a man cries softly, amidst long silences and incoherent references to Springsteen lyrics. In another, a woman holds a picture of Springsteen that she claims she often shows her young son, informing him that this man is “Daddy.”

I couldn’t help but wonder what the editors chose not to include in the final cut. For example, there are almost no references in the videos to Springsteen’s social conscience or his left-leaning politics. This is surprising, since there has long been a liberal edge to Springsteen’s lyrics. Didn’t any of the fans submitting videos feel moved by “American Skin,” “Last to Die for a Mistake,” or “Death to My Hometown”?

In addition, as a historian, I was disappointed that none of the video contributors depicted in the film were impressed by the place of history in so many of Springsteen songs. Two of his best songs -- “Youngstown” and “We Are Alive” -- for example, offer Springsteen’s romantic views of America’s past. Didn’t they strike a chord among the historically-inclined citizens of the “E Street Nation”?

Speaking of the E Street Nation, Springsteen’s band continues to be one of the best rock ‘n’ roll ensembles around. Each of the long-time band members has his/her own following, and the recently deceased Clarence Clemmons has achieved almost saint-like status among E Street fans. Why didn’t the director and the editors include a little video footage of fans’ affection for band members other than Springsteen?

But a short documentary film can’t have everything. Fortunately, for those who are partial to music more than fan commentary, the 77-minute documentary is followed by 45 minutes from a pulsating 2012 London concert that included a guest appearance by Paul McCartney. After the concert there is a cute epilogue in which Springsteen meets with a handful of the fans whose videos figure prominently in the film.

Springsteen and I was first screened in about 500 theaters around the country on the evening of July 22. A colleague and I saw the film at a mall theater in Iowa City. The audience was small, but it occasionally sang along with familiar songs and broke into applause at the film’s end. The most common accolade from the individuals I queried afterwards was that the film “has heart ... and soul.”

So, if you’re a Springsteen fan, you’ll definitely want to see the film in a theater. Otherwise, you can probably take a pass or wait a few months until it’s released for streaming. The next -- and only other scheduled -- showing of Springsteen and I on the big screen is July 30. “Grab your ticket and your suitcase. Thunder’s rollin’ down this track.”