Jeffrey Herf is a professor of modern European and German history at the University of Maryland, College Park. He is the author, most recently, of "Nazi Propaganda for the Arab World." 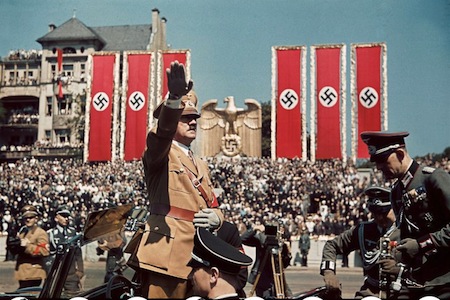 Ronald Radosh’s riposte to Diana West fantasies about Soviet control over American foreign and military policy during World War II is most welcome and very well done. It is depressing that West’s nonsense finds some fans. Yet error and Radosh’s convincing criticism draws welcome attention to the complexity of World War II and of the alliance of the Western democracies with the Soviet Union. Winston Churchill, who as much as any one person saved Western civilization in 1940 and 1941, put it best. When asked how he, whose political career was bound up with anticommunism since he advocated armed intervention to overthrow the new Bolshevik regime in 1917-1918, could support an alliance with Stalin he famously replied: “If Hitler invaded Hell, I would rise in the House of Commons to make a speech in favor of the devil.” In 1941, Hitler invaded the Hell of Stalin’s Russia and Churchill made a remarkable speech on the BBC to offer an alliance with the previous Soviet foe.

As a historian of modern German history, including the Nazi era, I would add the following by drawing on a vast and excellent scholarship by historians of Germany and Europe that West appears to have ignored.

1) The idea that the United States was dominated by the Soviet Union and entered World War II as a result of that influence was a core theme of Nazi propaganda. The Nazis, of course, asserted that an international Jewish conspiracy had created the alliance between the Americans and the British with the Soviet Union. The Nazis were particularly enraged at Franklin Roosevelt who, they believed, had robbed them of the chance to win the war in Europe. (For the relevant material see my book The Jewish Enemy: Nazi Propaganda during World War II and the Holocaust.) In spring 1945, Joseph Goebbels, Nazi Germany’s Minister of Propaganda, attacked the “Anglo-Saxon powers,” the United States and Great Britain for, in effect, stabbing Nazi Germany in the back as it was fighting the “Jewish Bolshevik” threat. West’s argument about Soviet domination over American policy evokes disturbing parallels to the Nazi interpretation of World War II.

2) Peter Hoffmann, the leading historian of the German resistance to Hitler makes clear that Klaus von Stauffenberg, the leader of the attempted anti-Nazi coup of July 20, 1933, and his fellow conspirators did not have the support of the vast majority of the German officer corps. Indeed, as historians Omer Bartov, Christopher Browning, Saul Friedlander among others in this country, and a host of historians in Germany in recent decades such as Horst Boog, Ulrich Herbert, Manfred Messerschmidt and Juergen Foerster have overwhelmingly demonstrated, the German general staff and officer corps distinguished itself not only by its criminality in fighting a racial war of extermination on the Eastern Front but also by its fanatical determination to fight the war to the very last day. West’s suggestion that the United States or Britain should have had anything to do with the German army after its participation in the Holocaust and these massive crimes is grotesque. The generals and senior officers belonged in war crimes trials, not in a new alliance with the Western democracies. As it was, too many of them successfully avoided trial and punishment in the postwar years. The dismantling of the German military was a precondition for peace and stability in postwar Europe.

In making this suggestion of an alliance with remnants of the Nazi regime, West unintentionally also echoes Soviet propaganda following World War II. It was the Soviet Union, the communist states and communist parties in Europe who claimed that West Germany and the American-led NATO alliance were simply a new version of the former “fascist” anticommunism of the Nazi regime. The leaders of the postwar alliance -- Truman, Marshall, Eisenhower, Acheson among others -- all understood that the defeat and definitive end of Nazism as a political force was a precondition for an effective containment of communism in the Cold War. Joseph McCarthy didn’t understand that distinction. Perhaps Diana West does not either.

3) Some ex-Nazi intelligence officers paraded their anticommunist credentials and supposed knowledge of the Soviet Union after the war and some were, for a time, hired by the CIA. Richard Breitman, Norman Goda and Timothy Naftali’s work on U.S. intelligence and the Nazis offers important material on these issues. The results of the “intelligence” about the Soviet Union offered by the ex-Nazi was often embarrassingly stupid. American intelligence officials concluded that their supposed knowledge of the communist regimes was generally worthless.

4) There is a shameless quality to the arguments then and since by the isolationist right in the United States. Having fought Roosevelt’s efforts to warn early on about Hitler’s danger and to intervene in the European war the “isolationists” then attacked him -- and Truman -- for the fact that the Red Army was in Berlin. Had Roosevelt not intervened in the war, it would likely have ended with the Red Army on the coast of France. Had the United States intervened earlier, the Red Army might have been at the Soviet-Polish border in May 1945.

5) Some official Soviet histories of World War II argue that the only reason the U.S. entered the European war was to prevent the Soviet Union from expanding further or, in communist terminology, to prevent “revolutionary” developments in Western Europe as well. Apparently those Soviet historians had not been informed that in reality Roosevelt was Stalin’s stooge. In fact, as Robert Dallek, Warren Kimball and Gerhard Weinberg have all pointed out, American entry into the war in Europe had everything to do with the defense of American national security and, initially preventing the defeat of Britain in 1940. One implication of West’s argument is that the United States should not have intervened in World War II in Europe and thus should have stood by passively as Nazi Germany dominated Europe and, as Weinberg and Goda have pointed out and as admirals of the United States Navy understood by 1939, posed a direct threat to the continental United States. What non-intervention in a war against a regime of such radical evil and huge global ambitions had and has to do with conservatism immersed in the Western moral and political tradition is hard to discern.

We scholars often complain that what we do does not reach a broad enough audience, that much of what we do is miscontrued and that the great simplifiers have an easier time finding a mass echo. West’s claims not only fly in the face of the work of historians of Soviet espionage, they also display striking ignorance of the findings of many historians of World War II, Nazi Germany, the Soviet Union and the Cold War in Europe. Ronald Radosh deserves the congratulations and thanks from many fellow historians who have worked for decades to write accurately and truthfully about these events. He has done the kind of thing that distinguished historians of the first rank need to do when our discipline is attacked because it presents work that unsettles some conventional wisdom or another.