Hey, Reince, Lay Off NBC and CNN for the Hillary Movies

Robert Brent Toplin, University of North Carolina, Wilmington (emeritus), is the author of several books on film, history, and politics, and for more than two decades he edited the Journal of American History’s movie reviews. 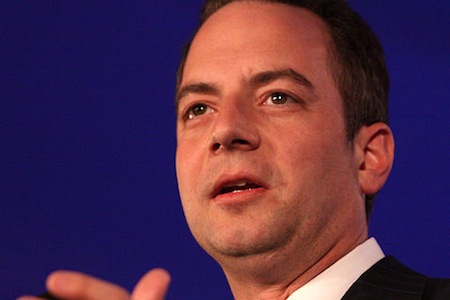 Reince Priebus, Chairman of the Republican National Committee, recently told NBC and CNN television executives that he would request that his party shut the two networks out of the GOP’s presidential debates during the 2016 primary race. Priebus issued the threat because NBC had a drama in production about Hillary Clinton and CNN planned to release a documentary film about her. The GOP chairman pointed out that Mrs. Clinton was the Democrats’ likely candidate for president in 2016. By depicting her life and activities, these movies might bolster Mrs. Clinton’s fortunes in the next presidential race. Others, including several GOP state party chairmen, warned that the two film productions could influence voters. They stressed that television networks with reputations for objectivity should not sponsor films that masquerade as unbiased productions.

These critics of NBC and CNN speak about film as if it is fundamentally different from print journalism. But in 1952, a unanimous decision of the U.S. Supreme Court in the Miracle case gave filmmakers related rights. The Court placed filmmaking under the protective umbrella of the First Amendment. In subsequent decisions the Court expanded that understanding. Justices of the Supreme Court treated filmmaking as a form of speech. They held that filmmakers deserve rights of free expression as do authors of books and articles.

Moviemakers are no longer encumbered by the kind of censorship that was in place until the 1950s, yet they sometimes encounter informal types of speech suppression. Warnings issued by Reince Priebus and others reflect that different, more subtle kind of pressure.

Individual films released by the television networks do not constitute official or corporate endorsements of candidates or famous persons. Instead, they represent the interpretations of specific artists who operate as sub-contractors. Those movies, when they deal with history or politics, deliver, in a sense, cinematic op-eds. In the case of CNN’s documentary film about Hillary Clinton, the network assigned director Charles Ferguson to operate as the film’s principal “author.” Ferguson is well-known for a hard-hitting documentary film about the recent financial crisis, Inside Job (2010). That production criticized both Presidents George W. Bush and Barack Obama for failing to challenge powerful financial interests. If Charles Ferguson’s filmic op-ed about Mrs. Clinton proves to be as piercing as Inside Job, his interpretation may offer a less flattering portrait of the subject than Reince Priebus expects.

Priebus, Dowd, and other critics of the NBC’s and CNN’s filmmaking plans characterize moviemakers as significantly more influential than speakers on television and radio or print journalists. Mika Brzezinski communicated that impression when speaking about the controversy over television’s Morning Joe. She suspected NBC’s movie about Hillary Clinton could impact the 2016 election (ironically, Fox is reportedly in talks with NBC to produce and distribute the series).

It might. But news stories, op-eds, radio broadcasts, and numerous other statements about politics can also make an impact on the 2016 elections. Filmmakers do not have the last word or necessarily the most influential word on politics. Each cinematic artist contributes one among many voices in the nation’s ongoing political conversations.

It is inappropriate for politicians to infringe on free expression of the media. Yet Republican leaders have sometimes acted in that fashion. In 2003, another RNC Chairman, Ed Gillespie, argued that CBS’s dramatic film, The Reagans, was excessively critical of the former president. A barrage of protests from Republicans and conservative groups evidently convinced CBS executives that the controversial production was more appropriate for the small, paying Showtime audience than a network broadcast. The pressure delivered by Gillespie and others did not constitute formal censorship, but it succeeded in reducing the movie’s range of communication.

Why did Reince Priebus apply pressure against the NBC and CNN productions that are now in development?

Perhaps his efforts aimed to excite the conservative base’s agitation over supposed liberal bias in the mainstream media. The protest may aim to discredit Hillary Clinton, as Republicans did in 2012 through accentuated criticism of the State Department’s handling of the tragic incident in Benghazi, Libya. A manufactured controversy might serve, as well, to leave television viewers with an impression that the films from NBC and CNN will be grossly biased.

Whatever the RNC Chairman’s purpose, his pressure tactics are troubling. Priebus should remember the slogan of the original Republicans of the 1850s who included the words “free speech” in their principal slogan. Movies, too, are essential contributors to democracy. They play an important role in America’s “marketplace of ideas.”