Jon Mitchell is a Welsh-born journalist based in Yokohama and an Asia-Pacific Journal associate. He has written extensively about Okinawa during the Vietnam War and the history of the island’s human rights movement. His latest work can be read at http://www.jonmitchellinjapan.com. 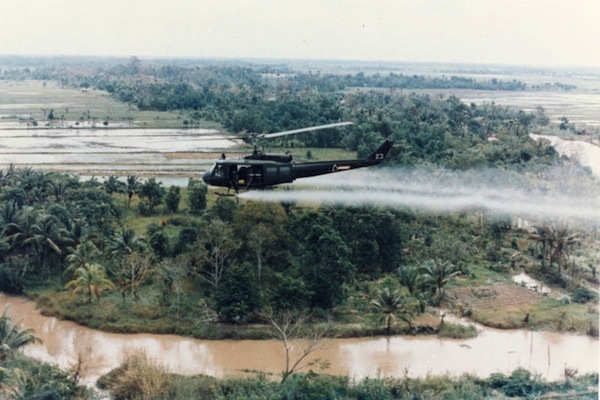 Between 1962 and 1971, the U.S. military sprayed South Vietnam with approximately 76 million liters of defoliants -- including Agent Orange -- in an attempt to rob its enemies of crops and jungle hiding places. The Pentagon assured South Vietnamese residents and its own troops who handled these chemicals that they were harmless to human health. But in reality they contained a witches’ brew of poisonous substances including arsenic and dioxin -- a substance described by the World Health Organization as “highly toxic and [that] can cause reproductive and developmental problems, damage the immune system, interfere with hormones and also cause cancer.”

As a result of exposure to military defoliants, an estimated three million Vietnamese people and tens of thousands of U.S. service members are suffering from serious illnesses; in many cases, their children and grandchildren are ill, too. Currently in southern Vietnam, there remain more than twenty dioxin hotpots on former U.S. military bases that used to store defoliants -- these continue to endanger the health of nearby residents.

During the Cold War, the Pentagon also used military herbicides outside Vietnam in approximately two dozen locations. For example, in the United States, it conducted experiments with herbicides in Florida and Hawaii; along the Korean DMZ and Thailand, it sprayed herbicides to clear vegetation around perimeter fences. However, there is one place that it has repeatedly denied these poisons were ever present: its Keystone of the Pacific, Okinawa.

Between 1945 and 1972, the entire island of Okinawa was under American control and today it continues to be unwilling host to more than thirty U.S. military bases. During the 1960s and 1970s, Okinawa was used by the Pentagon as its primary staging post for the Vietnam War. The first U.S. Marines deployed to South Vietnam were dispatched from Okinawa in 1965, troops were trained in Okinawa’s northern jungles in guerilla warfare skills and the island possessed a large stockpile of chemical and nuclear weapons in case the president decided to escalate the conflict to Hadean proportions.

Most importantly, Okinawa was used as a supply hub for the war. Materiel -- ammunition, fuel, coffins and medicines – flowed through Okinawa’s docks and airports. These deliveries were a two-way street as retrograde supplies were channeled back through the island for processing or disposal.

For the past three years, I’ve been investigating allegations that military defoliants were among the supplies shipped via Okinawa. I’ve interviewed more than thirty U.S. veterans who claim that they offloaded and stored these chemicals on the island during the 1960s and 1970s. Some of these veterans maintain that defoliants were sprayed on Okinawa to keep the fence lines and runways clear of vegetation; others allege surplus barrels were buried on Okinawa since it was cheaper than shipping them back to the United States. Many of these former service members are sick with illnesses identical to those suffered by Vietnamese people exposed to defoliants – some of their children are sick, too.

These veterans possess photographs of defoliant barrels on Okinawa and Japanese civilians who were employed within the U.S. bases at the time corroborate their accounts. Moreover, official records support the presence of military herbicides on the island -- in particular on Kadena Air Base. Located in the middle of the island, this USAF installation was one of the busiest airports in the world during the Vietnam War, when it was used for transporting supplies and B-52 bombing runs. Today -- despite some minor reductions in size -- it is still the largest U.S. installation in the Pacific region.

Among the paper trail suggesting that defoliants were present at Kadena during the Vietnam War is a 1966 report outlining herbicide training for Americans and Okinawans on the installation, documents showing that C-123 planes -- the aircraft used in southeast Asia to spray defoliants -- visited the base during the war and a 1971 report on Agent Orange citing a herbicide stockpile at Kadena.

Unsurprisingly, these revelations have created widespread alarm on Okinawa during the past three years; my research has often made headline news and Defoliated Island -- a TV documentary based upon my work -- was the winner of a top TV award in November 2012.

But despite the seemingly incontrovertible evidence, the Pentagon has continued to deny that military herbicides were ever present on Okinawa. Most recently, in February 2013, it announced the results of a nine-month inquest into my research which concluded that Agent Orange was never on the island.

The Pentagon report had apparently been designed to muzzle allegations once and for all. However due to the vast volumes of herbicides which were allegedly stored on Okinawa, it’s difficult to maintain a cover-up of such scale. The truth has a habit of coming out in the most unexpected of places.

In June 2013, laborers were upgrading a civilian soccer pitch in the island’s second-largest municipality, Okinawa City. The sports facility lay alongside Kadena Air Base and used to be part of the installation until this small parcel of land was returned to public usage in 1987. As crew members worked, they uncovered twenty-two metal barrels -- some painted with the logo of the Dow Chemical Company, one of the major manufacturers of military defoliants.

Tests on the contents of the barrels revealed traces of the herbicide 2,4,5-T and 2,3,7,8,-TCDD dioxin -- two of the substances found in Agent Orange and other Vietnam War-era defoliants.

One barrel contained dioxin levels 840 percent above the safe standard, while samples of water taken nearby revealed levels 280 times the legal limits. Tests did not reveal the presence of 2,4-D - the third component of Agent Orange - but experts surmised that its biodegradability would have broken it down in the years since the barrels had been buried.

Professor Katsuhisa Honda, the Japanese scientist in charge of the tests, likened the land to contaminated fields in South Vietnam. International experts agreed with him -- including Wayne Dwernychuk, the Canadian scientist who had spearheaded the identification of hot-spots in South Vietnam.

“If some of the levels seen in the Okinawa sample data sheet for TCDD were found in the environment of Vietnam, recommendations would be presented for immediate remediation, with attention being paid to potential exposure pathways to local populations,” Dwernychuk said.

The discovery of the barrels appears to be incontrovertible proof of the presence of military herbicides on Okinawa. But it remains to be seen how the Pentagon will proceed. Unfortunately, the U.S. government has a long history of finagling the truth when it comes to Agent Orange. For almost two decades, it refused to compensate U.S. veterans poisoned by the substance, only agreeing to help in 1991. Likewise, it avoided assisting dioxin remediation in Vietnam until August last year when it pledged to help clean up the toxic mess it had left behind at Da Nang airport -- a major Agent Orange storage site during the war.

In the case of Okinawa, the U.S. government must not be allowed to drag its feet. Not only is time too short for the U.S. veterans exposed on Okinawa -- many of whom have been bankrupted by medical bills -- but also Okinawan residents need to know the true extent to which the ground beneath their feet is contaminated.

Due to the number of U.S. bases on Okinawa and the volumes of Agent Orange allegedly involved, the soccer pitch dumpsite is unlikely to be the only one on the island -- similar disposal areas have been identified on MCAS Futenma and, what is today, a popular tourist area in Chatan Town.

Less than one hundred yards from the dioxin hot-spot in Okinawa City, on the other side of the fence within Kadena Air Base, there are two Department of Defense schools -- Bob Hope Primary School and Amelia Earhart Intermediate School.

Whereas the civilian soccer pitch has been cordoned off, these schools remain open and the Department of Defense has, so far, failed to inform parents of the dangers nearby.

If the assessment of scientists that the contamination of Okinawa City resembles hotspots in Vietnam is accurate, then these children’s health is at risk and the U.S. government’s delay is criminal.

Already too many people around the world have suffered from these poisons. It’s time the Pentagon comes clean and works with the people of Japan to remediate this problem before more people fall victim.