Abe Shinzo, Yasukuni and the Recurring Tragedy of Japanese Nationalism

by Thomas U. Berger

Thomas U. Berger is associate professor in the Department of International Relations at Boston University and author of Guilt and World Politics After World War II, Cultures of Antimilitarism: National Security in Germany and Japan. 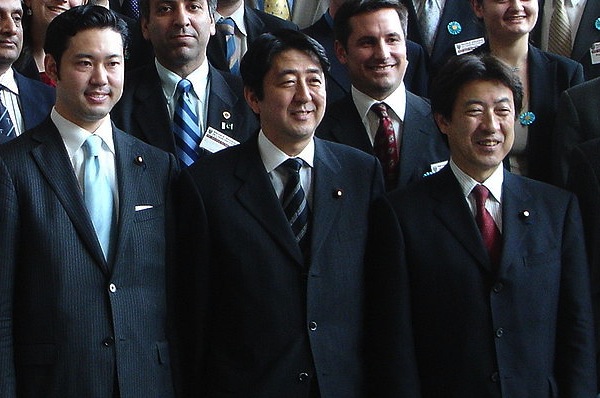 It has been an iron law of Japanese politics that whenever Japan moves to strengthen its defense and security establishment, there has been simultaneous pressure on facing up to Japan's wartime history. One of the first targets of Prime Minister Kishi Nobusuke's reforms back in the late 1950s (Kishi was the grandfather of current prime minister Abe Shinzō) was to clamp down on the left-leaning Japanese Teacher's Unions and to reintroduce pride in the nation into the school curriculum. In the late 1970s, Prime Minister Fukuda Takeo reinstated the old Imperial anthem, Kimigayo, as Japan’s national anthem and reintroduced the Imperial calender system.  Prime Minister Nakasone Yasuhiro famously visited the controversial Yasukuni Shrine in 1985 and called for a "final resolution of Japanese history." And of course, Koizumi Junichirō -- although not a rightist in the way that Kishi or Nakasone were or Abe is -- also visited Yasukuni in the early 2000s.

Coinciding with each of these outbursts of controversy over ideological issues was a perceived need for fundamentally adjusting Japanese defense and security policy to meet international political challenges. For Kishi it was revising the U.S.-Japanese Security Treaty to meet the realities of the Cold War in Asia. For Fukuda and Nakasone, it was responding to the challenges of the 1970s Soviet military buildup in East Asia. For Koizumi (and perhaps for Hashimoto Ryutaro, who visited the Shrine in 1996), the principle challenge the was responding to increased U.S. demands for burden-sharing East Asian defense responsibility after the end of the Cold War and the 9/11 attacks.

Linking national security issues and history is the deeply-held belief among Japanese conservatives that national pride and overcoming Japanese anti-militarism is the necessary spiritual complement to any effort to strengthen Japan’s defenses. From their perspective, the chief problem that Japan faces is not too much nationalism, but too little, and it is the absence of a strong sense of patriotism that prevents Japan from successfully managing not only the external challenges that faces, but a host of domestic social and political issues as well -- from an increase in juvenile crime to low birth rates. Old-fashioned nationalism is seen as a panacea for all that ails Japan. Even less ideologically committed Japanese leaders, like Koizumi, find themselves pushed to make nationalistic appeals to rally domestic political support for changes to defense policy.

Abe's trip to Yasukuni very much fits the general pattern, and we should not be surprised that Abe is reverting to type. Japan faces unprecedented new security challenges in the form of a nuclear-armed North Korea and an increasingly assertive China. Japanese conservatives, concentrated in the ruling Liberal Democratic Party (LDP), are convinced that Japan more than ever must wake up from what they characterize as that “pacifist haze” (Heiwa Bokke) that has clouded its judgment since 1945. Even more centrist Japanese are inclined to be sympathetic to the conservative position. According to Japanese Cabinet Office opinion surveys, the Japanese public feels the chance of war is greater today than it was at any point during the Cold War, and there is strong general support for Abe’s hard-line policies on territorial and defense issues.

An equally predictable part of the story is the inevitable political backlash. Centrists – and the Japanese public as a whole -- tend to become alarmed by the potential ramifications of implementing the conservative policy agenda. They worry that the conservatives may undermine the foundations of Japanese democracy, especially as “strengthening the nation” is frequently linked to increasing state power. Likewise, pragmatists -- especially in the business community but also many foreign policy and defense experts -- become worried that an overly nationalist stance will wreck Japan’s relations with its neighbors. Granted, with the practical disappearance of an organized Japanese left in the late 1990s, resistance to the conservatives has become more muted. Nonetheless, reservation regarding a revival of Japanese nationalism and the strengthening of the state have remained deeply rooted in the Japan’s political culture, reemerging periodically whenever it seemed that Japan might veer sharply to the right.

In the case of Kishi, the backlash was so severe it forced his leaving office once the Mutual Security Treaty had been revised. In the case of Nakasone, while he was able to push through significant changes in Japanese defense policy, he suffered a severe domestic political defeat in connection with the trip to Yasukuni and decided not to visit the Shrine again as prime minister. The same was true of Hashimoto, and while Koizumi persisted in visiting the shrine throughout his prime ministership, the public supported him more for his anti-establishment views and reform efforts, not his nationalist positions. After Koizumi stepped down in 2006, a consensus formed even within the LDP that the Shrine visits had to end. Ironically, Abe’s candidacy for the presidency of the LDP only really took off when he pledged not to visit Yasukuni in his official capacity as prime minister. When Abe’s conservative instincts reasserted themselves -- this time in the form of a push for constitutional revision -- Japanese voters handed the LDP a resounding defeat in the 2007 Upper House elections, precipitating Abe’s stepping down from office a few weeks later.

This, if one will, can be seen as the tragedy of the post-1945 Japanese conservatives. Time and again, the Japanese conservatives feel that the nation has called on them to meet an external challenge. Time and time again, they have sought to shake that nation out of its somnolent slumber regarding the realities of a harsh and unforgiving world. And time and time again, that nation has refused to be woken up the way the conservatives have hoped they would, preferring to make some minimal adjustments and hitting the snooze button on the nationalist alarm clock -- or tossing the clock out altogether.

If the past is prelude to the future, we can expect (and may already be seeing) certain developments. First, there will be a domestic political backlash, which will only get worse if the prime minister pushes an old-fashioned sort of conservatism any harder. The international backlash is already clearly in evidence. Second, there will continue to be changes in defense policy, but of an incremental sort following plans that have long been chewed over by the defense and national security policy professionals inside the bureaucracy for many years. And third, Abe is likely to be disappointed by the meager results of his grand gestures, but comforted by the thought that he fought the good fight and did the right thing.

What is different today is the broader international situation. Japan is for the first time on the front lines of a possible military confrontation, and its actions create the possibility for a more serious escalation with its neighbors. The already tense situation around the Senkaku/Diaoyus gets tenser if Chinese and Japanese commanders on the ground are convinced that the other side is the enemy, and the potential fall out of an incident -- if and when it happens -- is likely to be far larger. In addition, the United States for the first time has to worry that it will get dragged into an unnecessary fight by Japan. What used to be a largely intra-Asian issue is increasingly becoming a potentially serious problem in the U.S.-Japan relationship.

In the past, the United States has tended to stand back from the history issue viewing it as an annoying distraction from the larger geo-strategic and geo-economic challenges that need to be tackled in the Asian region. The new risks associated with the history issue, however, is forcing many inside and outside the U.S. government to reconsider this position. While on the one hand, Washington cannot afford to alienate its closest and most important partner in Asia, it also cannot ignore the tensions that Abe’s agenda is generating in the region. Unless some new modus vivendi on historical issues can be worked out, there is a real danger that the tragedy of the Japanese conservatives may become a tragedy of a larger sort.