Why is Hemp Illegal?

Bradley J. Borougerdi is a PhD candidate at the University of Texas at Arlington. Follow him on Twitter @BradleyJ34. 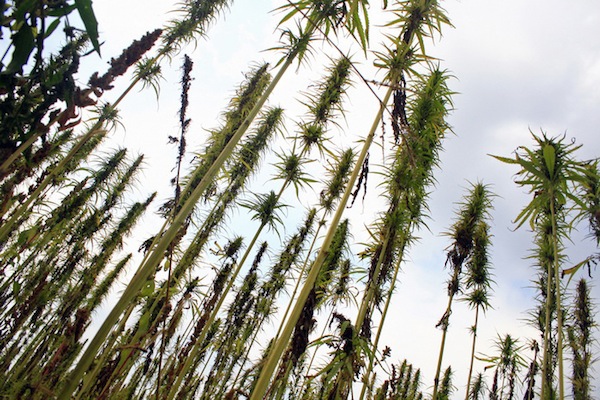 Colorado’s recent landmark legislation reflects how popular demand is turning marijuana into big business, and it’s happening at a time when hemp is being touted as the nation’s most promising plant. This should come as no surprise to anyone, as perceptions of the one have been connected to perceptions of the other for quite some time now. After all, marijuana derives from hemp, so the fierce onslaught against the drug that surfaced in the 1930s was bound to have a detrimental impact on the image of the plant as a whole.

Over the past forty years, however, activists have been working to counter these attacks by showing how versatile the hemp plant can be as a medicine, oil, fiber, and recreational intoxicant. Now, armed with new research that significantly undermines the negative associations that have dominated the discourse for so long, advocates for “hemp awareness” have made significant headway in swaying public opinion towards lightening up on the plant -- and in Colorado, outright legalization.

In their efforts, these activists have appealed to a time long past when hemp had an important role to play in the Atlantic world, and in so doing have made claims about the plant -- that it was outlawed due to its potential to eat into profits of William Randolph Hearst and the Du Pont chemical empire -- that are grossly exaggerated. Granted, since the plant has a unique ability to express its genetic code in exceptionally diverse ways, new technological advancements could in fact transform it into a vital commodity for dozens of industries today. However, two hundred years ago, hemp seemed to cause more problems than it solved, and the tendency among activists to simply ignore this or postulate conspiratorial theories to explain why the plant fell out of favor has caused us to overlook the role that culture has played in transforming it from an important strategic commodity into a banned intoxicant over the course of the eighteenth and nineteenth centuries.

Though hemp was first cultivated by humans 12,000 years ago, a good place for our story to begin is in the 1760s, when the British were losing control over some of their American colonies but gaining control over the Indian subcontinent. As the largest maritime imperial power, they needed a lot of rope -- made from hemp -- to rig the ships they were sending to trade and patrol in every corner of the world. However, the British simply could not produce the high quality hemp stocks that were needed to make rope, which meant that they were forced to import the bulk of it from Russia. Many Parliamentarians considered this a pressing issue, so a series of treatises emerged on both sides of the Atlantic that were designed to motivate the American colonists to cultivate and process hemp into fiber for the sake of the empire. These publications included detailed instructions on the best ways to produce the high grade material, but they were largely unsuccessful in convincing the colonists to abandon their traditional practices. The result was a shortfall in production and a much inferior American product. After their war for independence, Americans still had no desire to adopt the labor-intensive and environmentally-straining method of producing a superior hemp product, so they sought to establish trade relations with the hemp--producing empires (Boston’s Russia Wharf bears testament to this trade). On the other hand, the British continued to search for a colonial outlet through which to promote hemp cultivation.

Their next option was Canada, and for a brief time this worked; but they were never able to obtain anything more than a fraction of what they needed from there to function without Russian imports, so the search continued. After reorienting the empire towards the east, their burgeoning empire in India seemed like the most viable option, but Indians grew hemp for intoxication. The British were vaguely aware of the so-called “Oriental” preparations of hemp before this imperial reorientation, but sources indicate that they were greatly confused about what they actually were, or how they were used. Initially, many thought it was an entirely different plant, but more frequent encounters over the years led most to assume that it was the same plant, only that the degenerate Indians used it improperly. Hoping to use their moral capital to “civilize” the Indians and secure an in-house supply of hemp, the British tried to promote its cultivation there for fiber as well, but the Indians were not inclined to abandon their traditional uses.

The lack of success the British had with promoting hemp cultivation for fiber led them to experiment with plants that Indians already used for such purposes, which turned out to be a success. Indeed, before long, they were importing nearly as much fiber from Indian plants as they were from Russian hemp, which opened the door for them to re-imagine the plant in ways they were previously incapable of doing due to their desperate need for naval stores. Of course, using it for intoxication like the “Asiatics” did was out of the question, so they tried to transform the “deviant” preparations into a useful medicine for the empire (very much like opium was transformed into laudanum, for example). Before long, enthusiastic descriptions of “Indian Hemp” as a panacea for a variety of illnesses started showing up in medical journals all over. The first publication surfaced in Calcutta, but within months, journals in London, Boston, Maryland, Philadelphia, New Orleans, and New York all printed excerpts of the British experiments in India, along with new ones Americans were conducting on their own. Despite all the praise for the new medicine, however, nearly every publication on the subject also included vivid descriptions of the “Oriental” uses, warning of the possible pernicious effects of participating in the “debauch” of hemp intoxication. These warnings became increasingly common as more and more experimenters reported mixed results with the effectiveness of the medical preparations, which often times did not work properly because no one had isolated the psychoactive compounds of the plant and therefore did not really understand its pharmacological properties yet.

By this time, Oriental exoticism had created a deep sense of fascination with the East in the American imagination. It was a place that both attracted and repulsed Americans, and the way they wrote about what had become known by then as “Indian hemp” demonstrates the duality of American Orientalism quite well. Writers such as Bayard Taylor provided vivid descriptions of their experiences with “going native” by using hemp while traveling through the Orient, and the imagery they provided inspired Fitzhugh Ludlow to conduct experiments of his own back in New York. However, the preparation that Ludlow was consuming and wrote about in The Hasheesh Eater (1857) was in fact not the “Oriental” preparation of hemp at all, but rather the medicinally concocted tincture that had been circulating across the Atlantic. After discovering that Taylor’s “hasheesh” derived from the same plant as the medicine Ludlow was consuming, he decided to play up the exotic, foreign qualities in much the same way as the Oriental travel writers did, which complicate the discourse significantly by further blurring the lines between the plant’s medicinal and intoxicating uses. Before long, medical publications such as the Provings of Cannabis Indica (1859) by the American Provers’ Union started citing literary descriptions of hashish “highs” as evidence of the negative effects that the medicine could have on those who used it, which in turn blurred the lines between literature and science.

So, the result was that, by the late 1850s, a sort of negotiation process or struggle for meaning was taking place in regards to the hemp plant as a whole. On the one hand, there was hemp fiber, which started out as an important strategic commodity but was hard to procure, so people started searching for substitutes. This allowed for the medicinal preparations to emerge, which over time proved ineffective and -- most importantly -- never really shed the oriental associations surrounding it. Consequently, hemp for intoxication began to overshadow the other two uses, and as more Westerners experimented with the various preparations and reported the exotic, often-times fantastical effects, the plant as a whole transformed into something they considered useless and dangerous. All of this happened well before the word marijuana entered the English language, which means that hemp was seen as a problem in America well before the rise of Reefer Madness in the 1930s. In fact, it also provides the context needed to understand how and why the entire plant was criminalized. We may be refashioning the meaning of this plant once again -- and perhaps even for good reason -- but that does not mean we should use the present to try to explain the past.