Review of Randall Balmer’s “Redeemer: The Life of Jimmy Carter”

Murray Polner, a regular HNN book reviewer, wrote No Victory Parades: The Return of the Vietnam Veteran and When Can We Come Home, about Vietnam War resisters. 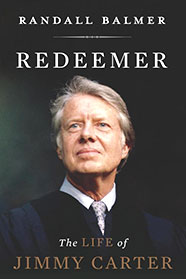 As Rodney Dangerfield might have put it, “Jimmy Carter gets no respect.” He has always had plenty of critics since it appeared that from the time he entered the White House he preferred an administration dedicated to making a few genuine changes. In a recent TV  interview Carter told Andrea Mitchell of NBC that President Obama has never called on him for advice as had other presidents because, he said,  “the Carter Center has taken a very strong and public position of equal treatment between the Palestinians and the Israelis. And I think this was a sensitive area in which the president didn’t want to be involved.” Indeed, some American Jews have shunned him because the title of one of his books included the word “Apartheid”  supposedly describing Israeli-Palestinian relations.

His emphasis on human rights deeply offended conservatives and reactionaries here and abroad, especially in dictatorial Argentina and apartheid South Africa. Few can forget the searing Iranian hostage crisis where he bore unfair blame for “weakness” in responding effectively after a botched rescue attempt. Some of the criticism was in part justified given his holier-than-thou moralizing.  For too many, then and now,  Carter as President, somehow lacked the charisma that, we are told,  many voters demand from their admired politicians, such as Ronald Reagan, for example.

In Carter’s losing 1980 presidential re-election  campaign his fellow evangelicals and fundamentalists, including  Billy Graham, Nixon’s close friend and religious counselor, turned against him in favor of the divorced, non-churchgoing Ronald Reagan.  “His [Reagan] life  seems to be governed by a few anecdotes and vignettes that he has memorized,” went a sour entry in  Carter’s diary about his rival. “He doesn’t seem to listen to anybody who talks to him.” That’s the popular verdict among liberals, yet  despite the disapproval of many in his party Reagan chose to meet Mikhail Gorbachev halfway and thus helped end the Cold War.

Randall Balmer, an Episcopal priest who teaches at Dartmouth College, would like to set the record straight about our 39th President, even if at times his admiration for Carter occasionally flirts with hagiography. In Redeemer he portrays a proud and unapologetic Christian. Carter has always publicly explained, no insisted, that his life as peanut farmer, naval officer, politician and universal do-gooder has been guided by the living Jesus. Indeed, he says he spends up to 35 Sundays a year teaching Sunday bible classes in his tiny hometown of Plains. Georgia. He has never apologized to an increasingly secular America for his passionate religious beliefs and has  repeated over and again in many different ways his religio-political faith:. “I am convinced that Christians, Muslims, Buddhists, Hindus, Jews and other can embrace each other in a common effort to alleviate suffering and to espouse peace.”

Because of his family’s influence, especially his color-blind, tolerant  mother, \he  never turned his back on poor blacks and whites, in spite of\ his one failed effort to win an earlier political race by appealing to local racist sentiments. After that, as Georgia’s governor, this born and bred white activist evangelical southerner, “harking back to the Hebrew prophets,” became the herald of a “New South,”  personally dedicated to relieving as best he could  the burdens of the impoverished and rendering racial justice.  “The time for racial discrimination is over,” he told his fellow Georgians. Ironically, his New South soon went south because of the old Confederacy’s unhappiness with the national Democratic Party’s liberal racial policies and helped turn those states into rightwing Republican strongholds, where it remains today.

From the very beginning of his presidency Balmer claims “he was dealt a bad hand.”  0PEC’s oil embargo infuriated Americans lined up at gas pumps. Then, too, the  Soviet invasion of Afghanistan hurt his presidency. But with few options, he could do no more than ship weapons to Afghans  fighting Soviet troops only to have many of those fighters eventually turn into Taliban warriors. He also cancelled participation in the Olympics, an empty symbolic move, and then ordered every 18- year- old American boy to register for a non-existent draft, a move which no doubt terrified Moscow’s rulers. We still have no documented, definitive explanation why the hostages were  released from their Iranian prisons only on the very last day of his presidency. In addition, disruptive  issues unjustly excoriating  gays and lesbians and the looming battle over abortion were injected into the 1976 campaign by hard-line conservatives.  Additionally, a new and influential Religious Right championing excessive patriotism, individualism and laissez-faire capitalism arose in the seventies and attracted many erstwhile evangelical Carter voters.

Balmer properly concentrates on the religious elements that shaped Carter. In most of the 19thCentury and on into the early twentieth, evangelicals tended to oppose slavery, favor women’s equality, support common or public schools, and were often anti-war.  Change came slowly but especially after the humiliation of the 1925 Scopes trial and the way their most eminent spokesman, the pacifist and progressive William Jennings Bryan, was mocked. FDR’s New Deal brought them significant economic aid and they rewarded his Democratic Party with their loyalty.  Decades after, Carter’s declaration of Christian principles encouraged many of them to vote for him. Still, voting was never their prime concern. The world was a temporary resting place as they awaited  their heavenly reward.  Balmer reflects their thinking about working for political change and reform in this world as, “Why waste our efforts on making it a better place?”

But he pardoned young men who refused to serve in the Vietnam War, pushed through the Panama Canal treaties, and more than anything else raised his voice on behalf of everyone deprived of their rights.  The Argentinean newspaper publisher Jacobo Timerman, imprisoned and tortured for thirty months, once told me that because of Carter he and many other Argentineans were saved from further  torture and death by the  fascist-minded gang then running Argentina.  He was rightlyawarded the Nobel Peace Prize for his herculean mediation and success in achieving the Camp David agreement, which brought Israel and Egypt together for the first time since 1967. As a new president and soon after the Vietnam debacle, he tried to change the way the country dealt with the rest of the world. In his 1977 speech at Notre Dame University, he restated his pledge to defend human rights as the foundation stone of U.S. foreign policy, all human rights everywhere and not only those violated in Communists countries –certainly the first president to do so-- and then belittled the “inordinate fear of communism which once led us to embrace any dictator who joined us in that fear.” It was a rather brave and unanticipated effort to change the narrow  and customary  way foreign policy had been conducted since the end of WWII and was promptly damned by bellicose neoconservatives and liberal hawks alike, aroused lest a president behave too much like an idealist and dove.

Every presidential administration sooner or later confronts a rather limited range of options before making some dramatic moves, too often military. For the two Bushes it was war. For Reagan it was a proxy war in Central America. For Clinton it was Serbia and Kosovo. Carter chose to refrain from becoming involved in war, the only president in recent memory to have done so, a demonstration of how he viewed his temporal power as well as the strength of his personality and judgment.

His post-presidency  will surely be recalled for its exemplary humanitarian work, his support for democratic elections, his defense of women’s rights and his work in critical and dangerous areas. He opposed the Gulf and Iraq wars, and was against sending troops to Syria in 2013, much to the shock of some of his former supporters.  But Balmer’s slender, smart and searching book suggests much more, namely that historians need to take another, more serious look at his presidency. They may be surprised.

Correction:  In an earlier version of this article