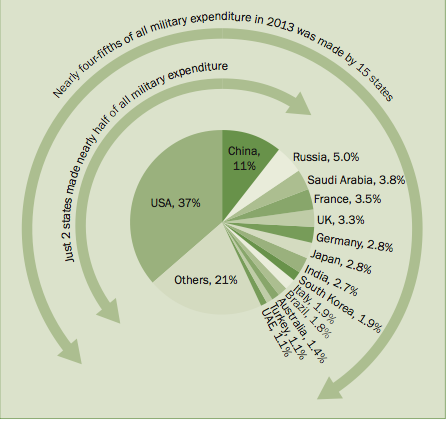 Is overwhelming national military power a reliable source of influence in world affairs?

If so, the United States should certainly have plenty of influence today. For decades, it has been the world’s Number 1 military spender. And it continues in this role. According to a recent report by the Stockholm International Peace Research Institute, the United States spent $640 billion on the military in 2013, thus accounting for 37 percent of world military expenditures. The two closest competitors, China and Russia, accounted for 11 percent and 5 percent respectively. Thus, last year, the United States spent more than three times as much as China and more than seven times as much as Russia on the military.

In this context, the U.S. government’s inability to get its way in world affairs is striking. In the current Ukraine crisis, the Russian government does not seem at all impressed by the U.S. government’s strong opposition to its behavior. Also, the Chinese government, ignoring Washington’s protests, has laid out ambitious territorial claims in the East and South China Seas. Even much smaller, weaker nations have been snubbing the advice of U.S. officials. Israel has torpedoed U.S. attempts to forge an Israeli-Palestinian peace settlement, the embattled Syrian government has been unwilling to negotiate a transfer of power, and North Korea remains as obdurate as ever when it comes to scuttling its nuclear weapons program.

Of course, hawkish critics of the Obama administration say that it lacks influence in these cases because it is unwilling to use the U.S. government’s vast military power in war.

But is this true? The Obama administration channeled very high levels of military manpower and financial resources into lengthy U.S. wars in Iraq and Afghanistan, and ended up with precious little to show for this investment. Furthermore, in previous decades, the U.S. government used its overwhelming military power in a number of wars without securing its goals. The bloody Korean War, for example, left things much as they were before the conflict began, with the Korean peninsula divided and a ruthless dictatorship in place in the north. The lengthy and costly Vietnam War led to a humiliating defeat for the United States -- not because the U.S. government lacked enormous military advantages, but because, ultimately, the determination of the Vietnamese to gain control of their own country proved more powerful than U.S. weaponry.

Even CIA ventures drawing upon U.S. military power have produced a very mixed result. Yes, the CIA, bolstered by U.S. military equipment, managed to overthrow the Guatemalan government in 1954. But, seven years later, the CIA-directed, -funded, and -equipped invasion at Cuba’s Bay of Pigs failed to topple the Castro government when the Cuban public failed to rally behind the U.S.-instigated effort. Although the U.S. government retains an immense military advantage over its Cuban counterpart, with which it retains a hostile relationship, this has not secured the United States any observable influence over Cuban policy.

The Cold War confrontation between the U.S. and Soviet governments is particularly instructive. For decades, the two governments engaged in an arms race, with the United States clearly in the lead. But the U.S. military advantage did not stop the Soviet government from occupying Eastern Europe, crushing uprisings against Soviet domination in Hungary and Czechoslovakia, or dispatching Soviet troops to take control of Afghanistan. Along the way, U.S. hawks sometimes called for war with the Soviet Union. But, in fact, U.S. and Soviet military forces never clashed. What finally produced a love fest between Ronald Reagan and Mikhail Gorbachev and ended the Cold War was a strong desire by both sides to replace confrontation with cooperation, as indicated by the signing of substantial nuclear disarmament agreements.

Similarly, the Iranian and U.S. governments, which have been on the worst of terms for decades, appear to be en route to resolving their tense standoff -- most notably over the possible development of Iranian nuclear weapons -- through diplomacy. It remains unclear if this momentum toward a peaceful settlement results from economic sanctions or from the advent of a reformist leadership in Tehran. But there is no evidence that U.S. military power, which has always been far greater than Iran’s, has played a role in fostering it.

Given this record, perhaps military enthusiasts in the United States and other nations should consider whether military power is a reliable source of influence in world affairs. After all, just because you possess a hammer doesn’t mean that every problem you face is a nail.