Timothy R. Furnish holds a PhD in Islamic, African and World history and works as an author, analyst and consultant to the US military. His website is www.mahdiwatch.org and he is on Twitter as @occidentaljihad 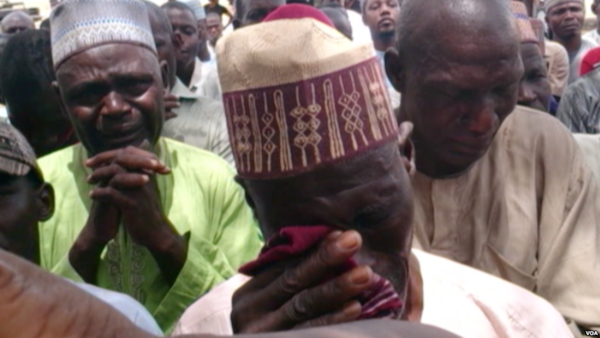 The Nigerian Islamic terrorist group Boko Haram has finally grabbed the world’s attention via its seizure of almost 300 Christian girls and its threats to sell them into (sex) slavery. But the group has actually been active for some 12 years, and in point of fact constitutes not some new, virulent form of African Islam but, rather, simply the latest in a long series of similar jihadist and shari`a-imposing groups going back for centuries in that part of the continent. 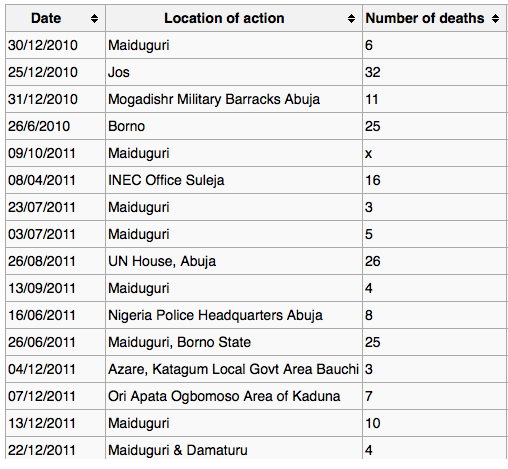 Nigeria is the most-populous nation in Africa, and its 160 million inhabitants are almost evenly divided between Christians (in the south) and Muslims (in the north). There are also a number of important ethnolinguistic divisions—notably Hausa, Fulani, Yoruba, Ibo and Ijaw. Nigeria is the world’s 14th-largest oil producer and the fifth-largest supplier to the US. It is also, according to revamped metrics, the largest economy on the African continent. Despite its enormous size, Nigeria has a relatively small military: only about 85,000 troops. (Compare that with Egypt, which has half Nigeria’s population but an army of over 400,000 men.)

Modern Nigeria was created by the British in 1903. The major polity they incorporated into the new colonial territory was the Sokoto Caliphate, which had encompassed not just modern northern Nigeria and Cameroon, but also parts of Niger and Chad, from its creation in the early 19th century at the guidance of Usman Don Fodio (d. 1817), the great Hausa Muslim mujaddid (“renewer” of Islam) whom many considered the Mahdi. Don Fodio’s movement was the most successful of a legion of Muslim jihads in West Africa (modern Mauritania, Senegal, Nigeria, etc.) between the 16th and 20th centuries. During its century of existence, the Sokoto state enforced shari`a law, which included brutal criminal punishments and the relegation of Christians to second-class dhimmi status. (Also, under Caliph Don Fodio and his successors, other jihads in West, Central and North Africa were given ideological and, if possible, financial support.) Don Fodio’s Islamization campaign was so successful that to this day in Nigeria the denizens of the former caliphal areas identify themselves first and foremost by their religion, Islam, rather than by their ethnolinguistic group—unlike most other Nigerians for whom the latter took priority. (This, however, does seem to be changing as Ibo, Yoruba and Ijaw peoples are increasingly identifying themselves as Christians, over against the depredations of Boko Haram.)

Under British rule, northern Nigeria and its former caliphal rulers and subjects were actually insulated from Western influences, under a well-meaning British policy of tolerance. However, the major result of this policy—in effect for almost six decades, until Nigerian independence in 1960—has been the underdevelopment and ideological isolation of the Muslim communities of the former Sokoto Caliphate, and the sowing of fertile ground for the likes of Boko Haram. However, that group did not spring into existence ex nihilo in 2002; rather, it emerged from the re-imposition of Islam into Nigeria’s political sphere which began only about a decade after independence. The most important Islamic political party was Jama`at Izalat al-Bida wa-Iqamat al-Sunna (“Society for the Eradication of Innovation and Establishment of the Sunna”), founded in 1978 by Abubakr Gumi (d. 1992), former Chief Mufti of Nigeria. He had strong Wahhabi leanings and so, too, did Izala, which received support from Saudi Arabia (despite the heretical belief that women could be educated). Two other influential Nigerian Islamic organizations were the Islamic Movement in Nigeria[IMN] and its offshoot, the Movement for Islamic Revival [MIR]. Both of these groups expressed open admiration for the Islamic Republic of Iran and its founder Ayatollah Khomeini, and so were often called “Shi`ite” by Nigerians—although they were actually Sunni. To add to the confusion, IMN and MIR were also sometimes labeled the Nigerian “Muslim Brotherhood”—although they had nothing to do with the Egyptian-created Muslim Brotherhood which has recently been so prominent in the “Arab Spring.” IMN and MIR were also vocal supporters of Bin Ladin and al-Qa’ida—yet received financial (and other) support from Tehran. Perhaps the most direct precursor to Boko Haram was Yan Tatsine or Maitatsine—named after its founder, Muhammad Marwa Maitatsine (d. 1980), “the Curser” (who regularly condemned other Muslims via takfir, “charge of unbelief”). Maitatsine considered himself another Islamic renewer, and perhaps even the Mahdi, and told his followers to engage in violent jihad against Nigerian federal soldiers and police forces, as well as other Muslims. Finally, it should be noted that the two major Sufi (Islamic mystical) orders operating in Nigeria, the Qadiris and the Tijanis, have long been opposed to the Wahhabi-fundamentalist vision of Islam and have worked politically, religiously, and sometimes martially to oppose groups like Izala and Maitatsine. This acrimony carries over into modern Nigeria, as Boko Haram deems the Sufis to be heretical “innovators” and not true Muslims. 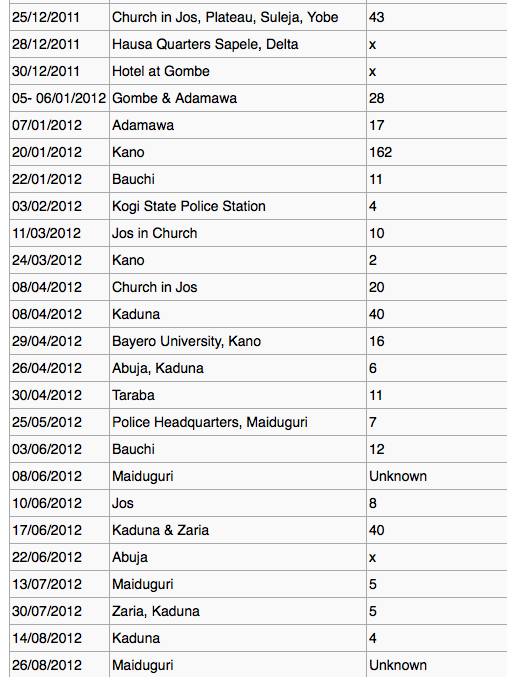 Because of the pressure of such Sunni Islamist groups, however, the Nigerian federal government devolved power to them in 1999-2000, allowing the imposition of some aspects of shari`a law in the country’s 12 northern, majority-Muslim states. However, this was deemed insufficiently Islamic by many in the the realms of the former Sokoto Caliphate, motivating Muhammad Yusuf (d. 2009) to establish “The Sunni Group for Islamic Da`wa and Jihad in African Land Formerly Known as Nigeria”—eventually becoming just Boko Haram, “[Western] Book(s) are Forbidden.” These “Nigerian Taliban” as they styled themselves included many highly-educated professors and students from Islamic universities in places like Maidaguri and Kano (not just uneducated poor, as conventional wisdom would have it). Their campaign of attacks on police stations and Nigerian federal troops sparked a government riposte, and in 2009 over 700 Boko Haram members—including Yusuf—were killed. His lieutenant, Shaykh Muhammad Abubakr b. Muhammad al-Shawka (or Shekaw), by all accounts a highly-educated Islamic scholar, took over and, if anything, has ratcheted up the violence; for example, the mass destruction of churches and killings of Christians really began under Shawka’s leadership. He has also sought, with some success, to link Boko Haram with other like-minded groups in Africa: al-Qa`ida in the Islamic Maghrib [AQIM], al-Shabab, and, in the wake of al-Qadhafi’s ouster in Libya, perhaps Ansar al-Shari`a and such organizations in the far south of that country.

Shawka may have a “twisted” view of Islam, but if so he would seem to have plenty of company. According to Pew poll data, 88% of Nigerian Muslims want Islam to play a large role in politics; 58% self-identify as “fundamentalist” Muslims; well 0ver 50% support harsh shari`a punishments for adultery, theft or “apostasy”—converting to another religion from Islam. Futhermore, over a third of Nigeria’s Muslims say suicide bombing is “often” or “sometimes” justified. In light of the high degree of Nigerian Muslim support for such fundamentalist Islam, it is not hard to see how Boko Haram operates with such impunity in large parts of that country. Attempts by some Muslim authorities to de-legitimize Boko Haram, such as unsubstantiated claims that its jihad or infidel-female-seizing activities are “unIslamic,” founder on the apparent text of the Qur’an, which enjoins the former in Sura al-Tawbah [IX]:5 and the latter in Sura al-Nisa’ [IV]:24—as well as on the Hadiths of Muhammad himself, which likewise favor fighting infidels and taking their women as sex slaves. (This is the same problem that “moderate” Muslims have with refuting claims of true Islamic fidelity from the Taliban, al-Qa`ida, Jabhat al-Nusra, the Wahhabis, et al.)

Boko Haram began as a local Nigerian jihadist group, but it has linked up with the global jihad movement (mainly via its offshoot Ansaru) and so has transformed into a regional threat across not just Nigeria but Cameroon, Niger, Chad and possibly Mali, Mauritania, Algerian and even Libya. Yusuf’s and now Shawka’s call to restore, in effect, the Sokoto Caliphate and true shari`a resonates with many Muslims in that part of Africa (as well as elsewhere in the Muslim world). The American response must be more than Michelle Obama’s mere hashtags, or even her husband’s robust drone strike program—which may kill many al-Qa`ida number twos, but does little to nothing in terms of undermining the Islamic rationale for jihad. Likewise, simply droning on about Islam being the “religion of peace”—as President Obama, his Attorney General, and his CIA Director do on a regular basis—has yet to dissuade a single dedicated Muslim, Boko Haram or otherwise, from choosing to kill infidels fi sabil Allah, “on the path of Allah.” Pretending that Boko Haram and its ilk are “extremist” or “radical” simply indicates an inability—or refusal—to correctly diagnose the problem—which is a literal understanding and application of the Qur’an and the Hadiths. Until the non-Muslim world (and the Muslims who profess to be moderate) acknowledge this inconvenient truth, the jihad will continue to burn and consume.

There are Muslims in West Africa in general, and Nigeria in particular, who eschew offensive jihad and also are capable of standing up to Boko Haram—the aforementioned Sufis of the Qadiriya and Tijaniya orders. (Such is the case in Somalia, where one of the major reasons that the jihadist Shabab have been halted in their drive to take over the country is that the Sufis of Somalia banded together and fought them, ideologically and martially.) The federal government in Nigeria would be wise to enlist that country’s many Sufis in a similar campaign; in particular, the Sufi shaykhs have the education and Islamic legitimacy to challenge the Qur’anic and Hadith literalism of Boko Haram and Ansaru. Merely killing Boko Haram members will not destroy the movement, as President Goodluck Jonathan’s local emulation of Obama’s global strategy proves on a daily basis; rather, Boko Haram’s clearly-articulated Islamic ideology must be stigmatized—and that can only be done by Islamic leaders, not outsiders like Obama or Tony Blair. Should such a strategy fail, it may come to pass that the least bad option for Nigeria is partition of the country: giving the northerners their desired Islamic state, and allowing the south its freedom as a Christian-majority one. Of course, the problem with this solution is that Africa would then be home to a potential terrorist haven on the order of the Taliban’s Afghanistan, and one much less isolated. But as time goes by, Nigeria’s position on the fault-line between Christian and Muslim civilization appears not just increasingly precarious, but dangerously unsustainable. 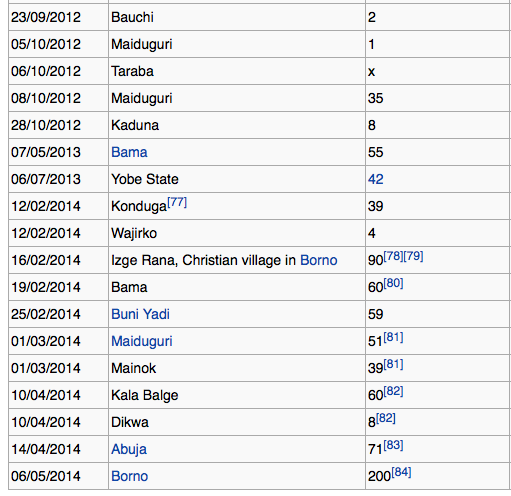