Review of Angela Stent’s “The Limits of Partnership: U.S.-Russian Relations in the Twenty-first Century” 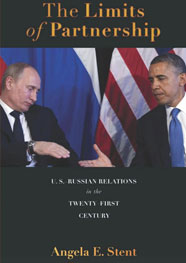 In early May 2014 Angela Stent, Director of Georgetown University’s Center for Eurasian, Russian and East European Studies, testified before a U.S. Senate Foreign Relations Committee Hearing on the United States, Ukraine and Russia. She was a logical choice because the book under review here provides needed background to understand the deterioration of U.S.-Russian relations that we are now witnessing. (I should disclose that I did my graduate work at the center that Professor Stent now heads, but this was before she arrived at Georgetown and we have never met.)

Stent’s book covers more than its title indicates, for it is a history and analysis of U.S.-Russian relations during the post-Soviet period from late 1991 until late 2013. Unlike Stephen Cohen’s Failed Crusade: America and the Tragedy of Post-Communist Russia (2001) and subsequent writings, Stent’s book is not a strong indictment of U.S. policy toward post-Soviet Russia. Although both approaches have their value, Cohen’s indictment approach is not in keeping with Stent’s style. She is more the prudent, balanced scholar, often presenting contrasting views without revealing, except tacitly, how she feels on a particular subject.

Council, Stent is much more a Washington “insider” than is Cohen. Currently, she also acts as a senior advisor to NATO’s Supreme Allied Commander in Europe.

In addition to 34 pages of notes and bibliography (about one-tenth of her book), there is a four-page list of interviewees, among whom are many of the important U.S. government foreign-policy and Russian experts. Among the latter are Strobe Talbott, who served President Clinton, and Michael McFaul, who for two years under President Obama was the U.S. ambassador to Russia. In addition, two former secretaries of state, Henry Kissinger and Madeleine Albright, are there. She has also interviewed important Russian foreign-policy figures including two former ministers of foreign affairs, Evgeny Primakov and Igor Ivanov. And she has ample contacts with other Russians. She has taught a course on U.S.-Russian relations at the Moscow State Institute of International Relations, and she has been a member of the Russian-sponsored Valdai International Discussion Club, which holds annual conferences, where President Putin speaks and answers questions.

In her Introduction, Prologue, and subsequent eleven chapters, Stent describes six major issues that have been the focus of U.S.-Russian relations: 1) nuclear matters involving arms control and missile defense; 2) nonproliferation of weapons of mass destruction, including the nuclear programs of Iran and North Korea; 3) the roles of Russia and the United States in what Russia has called its Near Abroad, i.e., the fourteen other nations that were part of the Soviet Union, especially Ukraine and Georgia; 4) European security, including Balkan conflicts, NATO expansion, Russia’s relationship to NATO and its participation in the Organization for Security and Cooperation in Europe (OSCE); 5) Russian and U.S. policies in the Arab world, especially in the last few years; and 6) Russia’s domestic policies, including its human rights record and its wars in Chechnya.

Stent stresses four “resets” of U.S.-Russian relations, each involving a different U.S. president—George H. W. Bush, Bill Clinton, George W. Bush, and Barack Obama. Except for the reset initiated by Vladimir Putin after he was the first foreign leader to call George W. Bush following the 9/11/2001 attacks, the other resets were initiated by the American presidents. Each reset began with hopes for improved relations, but ended with disillusionment and finger pointing. President Obama began the last reset after the 2008 Russia-Georgia War, which had brought relations to the lowest point of the George W. Bush presidency. By the end of 2013 the U.S.-Russian relationship had again deteriorated as differences over Syria and Russia’s granting of political asylum to intelligence-leaker Edward Snowden helped sour relations—the Russian annexation of Crimea and the current Ukrainian crisis occurred after Stent’s book appeared and have further harmed bilateral dealings.

Stent emphasizes the personal relations between American and Russian leaders, entitling one chapter on the policies of presidents Clinton and Yeltsin “The Bill and Boris Show.” She quotes President George W. Bush’s description of President Putin after their first summit in 2001: “an honest, straightforward man who loves his country. He loves his family. We share a lot of values. . . . I looked the man in the eye. I found him to be very straightforward and trustworthy—I was able to get a sense of his soul.” Bush admitted to later revising his opinion. Obama was first elected president just months after Dmitry Medvedev had replaced Putin as the Russian president, with Putin then becoming his prime minister. The Medvedev-Obama chemistry was better than that of Obama with Putin, which may have affected relations after Putin again assumed the presidency in 2012.

But the main stumbling block preventing closer ties has not been any bad personal chemistry, but the legacy of Cold-War and 1990s suspicions and resentments, coupled with different geopolitical interests and views related to the six issues mentioned above. Stent quotes one German official, who accused the United States of “an empathy deficit disorder” toward Russia, and she takes pains to explain how and why Russians view their country’s post-Soviet fate and U.S. policies toward them. “For most Russians . . . the 1990s were a time of weakness, poverty and uncertainty, of bezporiadok (disorder).” Many of them believe that much of the misery they suffered came from following U.S. and Western economic advice, and it is “a time to which Russians are determined not to return.”

She stresses that “since 1992, a central Russian objective has been to regain its status as a great power and be treated as an equal by the United States—a goal that was constantly frustrated.” By the end of Yeltsin’s presidency in 1999, “he felt betrayed by the Clinton administration because of its bombing campaign against Serbia during the Kosovo war, its enlargement of NATO, and its treatment of Russia—in Moscow’s eyes, as a defeated power rather than as an equal.” Putin has been even more determined to restore Russian prestige.

From that Russian viewpoint, NATO expansion into former Soviet satellite states and parts of the USSR—Poland, Hungary and the Czech Republic in 1999; Bulgaria, Romania, Slovakia, Slovenia, Estonia, Latvia, and Lithuania in 2004—reflected suspicious or hostile behavior toward Russia. Stent notes that an announcement in 2008 by U.S. Secretary of State Condoleezza Rice and German Chancellor Angela Merkel—“We agreed today that Georgia and Ukraine will become members of NATO”—further alienated Russia. Even though neither country has yet been admitted, Putin is determined that such an event should never occur.

Although not openly criticizing this NATO expansion coupled with Russian exclusion (as Cohen has constantly done), Stent does quote former State Department employee Richard Haass and former secretary of state James Baker, both of whom thought that Russia should have been encouraged to seek and eventually obtain NATO membership. But neither the Clinton nor George W. Bush administrations ever seriously took up the idea. Instead, as Stent points out, Russia was offered, and hesitatingly accepted, various looser relations with NATO.

Stent also sees considerable continuity between the above two U.S. administrations in promoting democracy and a market economy in Russia and other former communist portions of eastern Europe. She believes that the George W. Bush’s core foreign policy idea was his “Freedom Agenda.” She quotes him as stating in 2005 that “the best hope for peace in our world is the expansion of freedom in all the world. . . So it is the policy of the United States to seek and support the growth of democratic movements and institutions in every nation and culture, with the ultimate goal of ending tyranny in our world.” He later added, “I viewed NATO expansion as a powerful tool to advance the freedom agenda. Because NATO requires nations to meet high standards for economic and political openness, the possibility of membership acts as an incentive for reform.”

Especially hostile toward Russia was Bush’s vice president, Dick Cheney. In Duty (2014),Robert Gates, who served as secretary of defense from 2006 to 2011, wrote, “And when the Soviet Union was collapsing in late 1991, Dick wanted to see the dismantlement not only of the Soviet Union and the Russian empire but of Russia itself, so it could never again be a threat to the rest of the world.”

Stent is good at pointing out disagreements within administrations and between presidents and Congress—and also between NATO countries. “The [U.S.] interagency process on Russia/Eurasia was becoming dysfunctional,” she writes, describing the situation in 2006. She notes that Gates and secretary of state Rice were more pragmatic, less ideological, than Cheney. (Gates noted in his memoir that he got “along fine” with Rice and that they “both had doctorates in Russian and Soviet studies.”)

Although Russia viewed Bush’s freedom agenda, especially in areas such as Ukraine and Georgia, but also in Iraq, with great suspicion, the goals of Obama’s Russian policy were less ideological. Thus, some important gains were made, especially during his first term when he worked mainly with Medvedev. The gains included a new START arms control treaty, tougher sanctions on Iran, and gaining Russian cooperation on transportation to and from Afghanistan.

Stent herself seems to favor a pragmatic approach to Russia. She recognizes the economic improvement of Russia under Putin, that it is an “energy superpower,” that its worldview is different than ours, that “Washington should exercise restraint in publicly commenting on developments in Russia,” and “it should focus on those concrete areas” where we “can and must work together.” Among these areas, she lists counterterrorism and counterproliferation, including restraining any Iranian nuclear weapon development; trade and business relations; and dealing with global hot spots like Syria and “new frontiers, such as the Arctic,” where potential new energy sources are abundant. But Stent also suggests the need for something I think requires more emphasis. In writing of the NATO expansion which omitted Russia she writes “or perhaps it also reflected officials’ lack of imagination and reluctance to think creatively about what would admittedly have been a major challenge.” More empathy, imagination, and creativity from all sides would indeed be welcome.

In summary, The Limits of Partnership is a comprehensive and objective history and analysis. While dealing with the detailed complexity of the many issues involved, it does so in a clear, straightforward style. Although written before the present Ukrainian crisis, it is an indispensable source for understanding why this crisis has worsened our relationship with Russia. Stent includes numerous details of our differences over Ukraine, including these Putin words to President Bush in 2008: “You have to understand that Ukraine is not even a country. Part of its territory is in Eastern Europe and the greater part was given to us.”