Juan Cole is Director of the Center for Middle Eastern and North African Studies at the University of Michigan. He maintains a blog on US foreign policy and progressive politics, Informed Comment, where this article was first published. His newest book is, The New Arabs: How the Millennial Generation Is Changing the Middle East (Simon and Schuster).

Update: Daesh (IS, ISIS, ISIL) has said they were behind the attack.

Paris was hit by at least two well-trained and -equipped terrorist cells in a coordinated attack on 6 or 7 soft targets on Friday night. The attack that took the most lives, over 120 according to a high French official, was the assault on the audience for a musical performance by the Eagles of Death Metal (not actually a death metal band) at the Bataclan concert hall. Four assailants shot down audience members with machine guns, then when police went in after midnight, three detonated their suicide bomb belts. A fourth was shot dead, but then when he fell, his bomb went off anyway. But the cowards also shot up a Cambodian restaurant, set off bombs outside a soccer stadium and committed carnage elsewhere.

Regular readers know that I grew up in part in France; I had a fellowship at the Nouvelle Sorbonne a couple of years ago in Paris, a city I absolutely adore, and this news hit me viscerally. I can only express my support and profound solidarity with the brave Parisians. 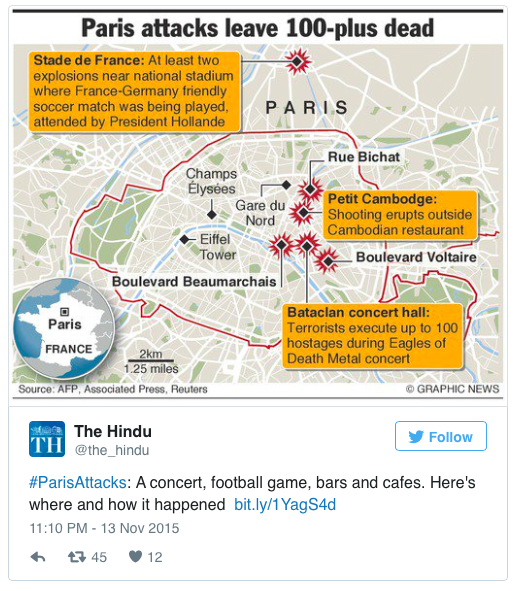 A radio and television professional who was at the Bataclan and survived reported “I clearly heard them say to the hostages, ‘It is [President Francois] Hollande’s fault, it is the fault of your president, he should not have intervened in Syria.’ They also spoke of Iraq.”

If this report is accurate, then the attackers were likely members of, or sympathizers with Daesh (ISIS, ISIL), which holds territory in Syria and Iraq, and against which France began flying missions in September. Another possible culprit is core al-Qaeda or one of its affiliates, such as the Support Front (al-Jabha al-Nusra) in Syria. The Support Front does not, however, have territory in Iraq, and France has not specifically targeted it in the west of Syria, as opposed to hitting ISIL in the east.

When I was in France in mid-October, I was told by a former diplomat that President Hollande had decided to begin flying missions against ISIL in Raqqa, Syria, last September because French intelligence had learned that ISIL was planning to hit France. It is estimated that there are some 3,000 radical French Muslims fighting in ISIL (though remember that this number is proportionally tiny, since there are on the order of 3 million French Muslims, some 5% of the population– and the majority of them is not religious).

This operation may, then, have been planned even before France was militarily involved in the campaign against ISIL in Syria, and the terrorists’ assertion that it was revenge for that intervention of the past two months has things backward.

The French air force has been inflicting substantial damage on ISIL in Raqqa and its hinterlands. On Tuesday, AFP reported that France launched a fourth wave of airstrikes on Daesh targets in Syria, targeting the oil infrastructure that is a source of much of ISIL’s budget.

But AFP says, “The two previous waves targeted training camps for foreign jihadists who were suspected of preparing attacks in France. Hollande said on Thursday last week operations would be expanded to include “all those sites from which terrorists could threaten our territory”. The president also said France would deploy its nuclear-powered aircraft carrier — the flagship of the French navy — to boost operations against IS in Syria and Iraq.”

So France tried to forestall an attack on French soil by ISIL from last September by disrupting its training camps and hoping to disrupt the planning and logistics. But if the plot were more advanced than French intelligence knew, and ISIL operatives were already in France and gathering up the arms, bombs and ammunition they needed for a terrorist strike, then bombing training camps in Syria would only have stiffened the terrorists’ resolve.

I underline that we don’t know who exactly ordered and carried out Friday’s attack. But the circumstantial evidence is that it was the work of, at the least, sympathizers with Daesh.

President Hollande closed French land borders, declared a state of emergency, and deployed 1500 troops in the streets of Paris. Schools and universities will be closed on Saturday, and all school field trips have been canceled. The Schengen rules allow member countries, who had removed visa requirements for each other, to reimpose border controls across the board in an emergency.

Some fear that these strikes will spell the end of Schengen open borders and will negatively affect the refugees that have come to Europe in the thousands recently.

The terrorists may have been attempting to replicate the 2004 Madrid train bombings, which also aimed at soft targets, and which convinced Spain to withdraw its troops from Iraq.