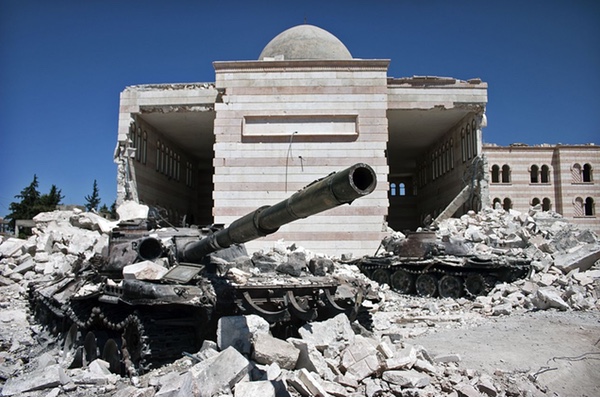 The recent terrorist attacks in Paris remind us that troubles associated with the civil war in Syria are likely to grow if the conflict is not brought to an end soon. The fighting in Syria has created a power vacuum, allowing radical jihadists to establish a dangerous presence there and in neighboring Iraq. The breakdown in Syrian society has also produced an extraordinary humanitarian crisis. Thousands of refugees are seeking asylum in Middle Eastern and European nations. Many of them have received food and shelter, but now political leaders in Europe are attempting to close borders and turn away desperate refugees. Recently governors in the U.S. joined the reaction to terrorism, asserting that their states would not accept the refugees.

These troubles could diminish if the fighting in Syria came to an end, but current prospects for a cease-fire are not promising. Syria’s civil war has not moved closer to a resolution in recent months. Instead, the conflict broadened and became more complicated. Leaders in the United States, France, Russia, Turkey, and Iran escalated their involvement, as have other nations. Regional tensions between Sunnis and Shiites intensified. It is difficult to arrange a peace settlement in the civil war because disparate religious, ethnic and ideological groups are involved. Aside from Syria’s controversial president Bashar al-Assad, the situation lacks governmental authorities. Who or what could legitimately represent various combatants at a negotiating table?

The Americans, the French, and others are putting the cart before the horse when they demand a more robust fight against the Islamic state. First, Syrians engaged in civil war need to accept a cease-fire. If their internecine conflict is not brought to a close, efforts to crush ISIS will remain extremely difficult.

In view of the extraordinary destruction and loss of life since the civil war began in 2011, it should be obvious that the Syrian people have a vital stake in ending the protracted battles. Yet they cannot stop the fighting on their own. Blood and treasure have been lost. Each warring group seeks revenge for past suffering. Compromise seems unacceptable. Leaders insist on victory.

Syrians are not unique in their failure to end destructive hostilities. When engaged in civil and international wars, the Americans, Europeans, and Japanese were unable to extricate themselves from lethal conflicts. Even when it had become obvious that continued struggle was counter-productive, they fought on.

In the American Civil War, leaders of the Confederacy should have surrendered after Atlanta fell and General William T. Sherman led the Union army on destructive march to the sea in December 1864. Yet southerners fought into the spring of 1865. In the last days of the war officers of the Confederate army torched sections of Richmond, attempting to deny the city’s supplies to the approaching Union army.

Europeans should also understand how difficult it is to stop a bloody war once it starts. Within a year after the beginning of World War I, it was evident that continued fighting was becoming highly destructive to all sides in the conflict. But the Europeans would not put down their arms. The fighting continued until the U.S. military’s late intervention turned the tide. During the Second World War, Germans should have recognized in 1944 that their cause was lost. Soviet armies were rushing from the east, and Western allies were pushing through France. Yet resistance continued into the spring of 1945. In the final days, when Hitler died in his bunker, German soldiers were still fighting in the rubble-strewn neighborhoods of Berlin.

The Japanese can understand how difficult it is to end a war, as well. Despite the firebombing of Tokyo and other cities, resistance to surrender continued. News about destruction from two atomic bombs should have ended talk of resistance, yet some of Japan’s military officers wanted to continue the struggle. It took intervention from Emperor Hirohito to bring resistance to an end.

The Syrians appear unable to step away from their disastrous conflict, which is creating a severe humanitarian crisis. Already 4.1 million Syrians have fled their country, and 6.5 million have been displaced internally. Many Syrians sought asylum in Europe, and their relocation inspired thousands in Afghanistan, Iraq, and other countries to follow their example.

At first leaders and citizens in some European nations welcomed the refugees, but recently opinion shifted. Even in generous countries like Germany and Sweden, resistance to the migrants grew. Across Europe demagogues aroused fear of an “invasion.” Governments closed their borders. In the USA as well, resistance spread. More than twenty governors have now declared they would not allow Syrian refugees to settle in their states. Some political leaders in the United States have stoked religious tensions by announcing that they will accept Christians from Syria but not Muslims.

These developments could exacerbate the humanitarian crisis. If no country accepts the displaced Syrians, some refugees may find themselves in a situation that resembles that of Jews fleeing persecution in 1939. Jewish families hoped to escape to the Western Hemisphere on the SS St Louis, but they were not allowed to disembark in the United States and other countries. The SS St. Louis returned to Europe, and some of the ship’s passengers died in the Holocaust. If stranded migrants from Syria have little choice but to return to their war-torn land, they, too, could be endangered. Many refugees wish to go home, but they will not resettle in Syria until life is secure.

Much attention in the Western media focuses on the migration crisis in Europe, but it has been much greater in nations that border on Syria. Turkey, Jordan, and Lebanon have provided shelter and food for thousands of displaced persons. As a percentage of overall population, the commitment of those countries has been greater than the welcome provided by Europeans. Syrian children make up 41% of public school students in Lebanon. The challenge of feeding millions of displaced persons is so huge that the United Nations recently cut back its emergency food rations in Lebanon and other countries. The U.N. high commissioner for refugees said the burden of aiding adults and children is now so great that “we are financially broke.”

Continuation of the civil War in Syria could also leave many nations more vulnerable to terrorist attacks. Assaults on civilian populations surged in recent years. It is difficult for security agents to identify culprits, and some of the plots may not have been hatched by operatives in Syria. But it is clear that the staging ground ISIS created in Syria (and parts of Iraq) facilitated the planning of Internet-based appeals. Among the recent assaults are the killing of tourists at a hotel in Tunisia, suicide bombings in a Beirut, Lebanon neighborhood, the downing of a Russian plane over Sinai and, of course, the slaughter in Paris. Reports about new acts of terrorism may punctuate the news in months and years to come. As long as the civil war continues in Syria, radical jihadists can plan mischief from their sanctuaries.

Leaders in the West and Middle East are, understandably, fearful about intervening in Syrian affairs to force an end to the civil war. They worry about slipping into a quagmire. But, the Americans, Russians, French, Turks, Iranians and others already have one foot in a quagmire. They are engaged in a variety of ways, yet they are seeing little reward for their investment.

It now seems imperative that the leaders in the West and the Middle East find a way to coalesce and force the combatants to accept a cease-fire. That effort must involve a broad coalition of nations. It cannot, as in the attack on Saddam Hussein’s Iraq, represent an essentially American commitment. Above all, the mission must be limited. It cannot settle every dispute that divides Syrians. It cannot bridge the Sunni and Shiite divide. It cannot determine the future status of Syrian president Bashar al-Assad or the makeup of a post-war Syrian government. Some aspects of the military struggle against ISIS may have to wait, too. The air campaign and other activities against the Islamic state can, of course, continue, but a definitive victory may not be workable until violence and chaos in Syria are substantially reduced. As long as the civil war in Syria drags on, the fight against ISIS is likely to prove disappointing.

Prodding combatants in Syria to end the civil war is a daunting challenge. As difficult as that effort appears, though, it is now seems less daunting than confronting multiple problems generated by the civil war, including a mounting refugee crisis, growing political tensions, and escalating threats of terrorism.