Mark Jarrett is the author of The Congress of Vienna and its Legacy (London: I.B. Tauris, 2014). 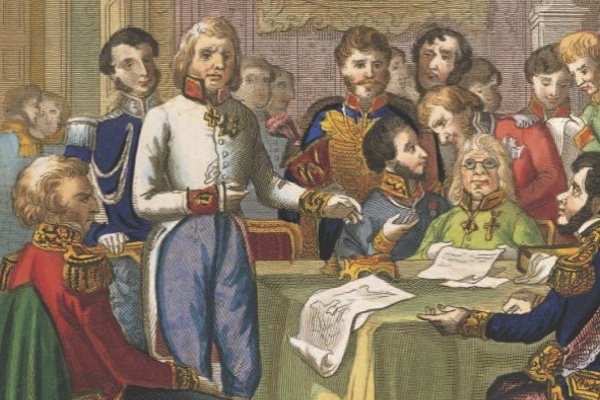 In the aftermath of tragic terrorist attacks in Paris, world leaders are now forging a new coalition to defeat ISIS. Ironically, it was also in Paris that world leaders first introduced multilateral global governance two centuries ago. Only at that time it was the French Revolution and Napoleon that galvanized European leaders, rather than a caliphate of terrorists operating a rogue state in the Middle East. The steps these earlier leaders took left a legacy that still affects us today.

The violence of the French Revolution and the Napoleonic Wars had lent a new urgency to the search for a more stable international order. The fields of Europe were literally drenched in blood. Ancient institutions like the Holy Roman Empire had collapsed. France had expanded to include Belgium, Holland, Rome and even the Croatian coast within its borders. Napoleon’s relatives and in-laws sat on the thrones of Spain, Westphalia and Naples. How was this period of frequent turbulence and conquest, ushered in by the Revolution of 1789, to be terminated?

It was only after Napoleon’s ill-fated invasion of Russia in 1812 that the allied powers were finally able to hammer together a durable coalition with a coordinated command structure. The British Foreign Secretary, Lord Castlereagh, voyaged to the Continent in December 1813; three months after his arrival, he persuaded the allies to sign the Treaty of Chaumont in which they pledged not to sign a separate peace with France and to maintain their alliance even in peacetime. Three weeks after the treaty was signed, the allied armies were at the gates of Paris.

In May 1814, the allied powers concluded a peace treaty setting the new borders of France. The same treaty called on all the other states of Europe to send representatives to Vienna that September. The celebrated Congress of Vienna settled remaining territorial disputes and set the boundaries for the rest of Europe, but it did not actually establish any mechanism for a system of continuing global governance. This only occurred after the dramatic return of Napoleon to the throne of France during the “Hundred Days” (March-June 1815). Restless in exile on the isle of Elba, Napoleon secretly sailed to the south of France and audaciously marched northward to Paris. The allies refused to recognize his resumption of authority and defeated him a final time at Waterloo.

Napoleon’s temporary return sent shock waves across Europe and triggered the creation of the “Congress System” (not to be confused with the U.S. Congress), just as the recent attacks on Paris are now precipitating the formation of an international coalition against the Islamic State. Allied leaders felt they had not done enough in 1814. To shore up the Bourbons of France and to stabilize Europe, France was temporarily occupied by allied troops, an “ambassadorial conference” was established in Paris to supervise the French government, and the four allied powers concluded the Quadruple Alliance, which they signed on November 20, 1815. In this new treaty, the allied powers pledged to consult with one another and with the King of France in the event of any new revolutionary outbreak in France. They further agreed to hold “meetings at fixed periods,” in which either the monarchs themselves or their chief ministers would be present. Such summit meetings, or “Congresses,” formed the very kernel of the new arrangements. In an age before the telegraph or telephone, the idea of face-to-face meetings between world leaders was in itself revolutionary.

The way that the new system was intended to operate was best illustrated by the Congress of Aix-la-Chapelle—today the city of Aachen—where Charlemagne had been crowned in 800 A.D. The main goals of this first peacetime Congress were to reassemble the allied leaders and to bring France into the new system. At Aix, the five powers concerted on a remarkable range of issues, from a territorial dispute between Bavaria and Baden and the fate of the Spanish colonies to the treatment of Napoleon and the abolition of the slave trade.

The new plan for the governance of Europe—and by extension, the world—was clear enough. The great powers would discuss issues at these periodic conferences and then impose their will on the rest of the Continent. “It really appears to me to be a new discovery in the European government,” observed Lord Castlereagh, “at once extinguishing the cobwebs into which diplomacy obscures the horizon, bringing the whole bearing of the system into its true light, and giving to the great powers the efficiency and almost the simplicity of a single state.” Of course, everything hinged on those powers reaching a consensus themselves.

Less than two years after the successful summit at Aix-la-Chapelle, the new system of global governance hit a snag. In the post-Napoleonic era, liberal elites—especially army officers, university students, former Bonapartist officials, and anti-clerical journalists—were greatly disappointed with the reactionary policies of Restoration governments and began agitating for change. Popular demonstrations, the circulation of hostile pamphlets, and a spate of assassination attempts rocked Britain, France and the German states. A series of successful revolutions then took hold of Southern Europe in 1820-1821, beginning in Spain and spreading to Portugal, Naples, Piedmont, Romania and Greece.

While British and French government leaders were just as anxious to suppress these popular movements as the ministers of the more autocratic states, they were not willing to convey their approval openly since such interference seemed to go against the very constitutional principles on which their own governments were founded. Prince Metternich, the Austrian foreign minister, would have gone along with repressing these revolutions unilaterally in the name of national security to keep Britain and France in the alliance, but the Tsar insisted on using the alliance as the means of repressing unrest in order to demonstrate the solidarity of Europe’s rulers.

This far the British and French leaders were not willing to go. They realized they would not be able to defend their policies successfully against the opposition in the British House of Commons and the French Chamber of Deputies. The result was that the alliance itself shattered. The eastern powers convened the Congress of Troppau, which the British and French attended merely as observers; this was followed by the Congress of Laibach, where the eastern powers met with the representatives of the Italian states.

There were subsequent attempts to reunite the five great powers, especially at the Congress of Verona, but after Castlereagh committed suicide in August 1822 and Tsar Alexander died in 1825, the project was doomed. Without the personal bonds created by living together at allied military headquarters in the final months of the Napoleonic Wars, later European statesmen simply did not have the requisite trust or interest needed to keep the Congress System alive. The system had never established formal institutions, and gradually faded from view.

While the great powers no longer convened periodic meetings in the spirit of the Quadruple Alliance, they did continue to make use of ambassadorial conferences whenever crises arose for the rest of the century. And the memory of the Congress System greatly influenced British thinking when President Woodrow Wilson proposed a League of Nations in 1918. The Council of the League and later the U.N. Security Council were both direct descendants of the “Congress System,” established by the Quadruple Alliance exactly two centuries ago. So, for that matter, is the G-20.

It is more difficult to draw precise lessons from this great experiment—the first attempt at global governance. The first lesson is, no doubt, that great powers have always played a critical role as anchors of international stability. And the second must be that great powers are generally reluctant to sacrifice their national sovereignty and will only submit to bonds of cooperation when faced with existential threats. The challenge for future world leaders is therefore to take the solidarity that arises in response to an acute emergency like ISIS and then to direct that spirit of cooperation to long-term threats like global warming. After all, if the powers of nineteenth-century Europe had been able to maintain the close ties of 1815-1823 for the rest of the century, they might well have been able to avoid the horrors of two world wars. Will we be able to fare any better?