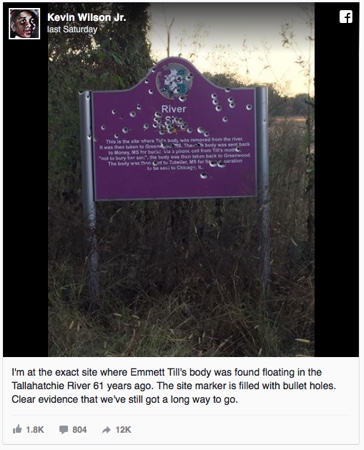 A memorial sign marking the place where Emmett Till's mutilated body was discovered in a Mississippi river in 1955 is riddled with bullet holes — and has been routinely vandalized since it went up in 2007.

Till, a black Chicago teen whose racially charged murder was a catalyst for the civil rights movement, was killed on August 28, 1955 by two white men while visiting his uncle in Money, Miss. His murderers, J.W. Milam and Roy Bryant, were acquitted by an all-white jury but later confessed to kidnapping, torturing and killing the 14-year-old because he had whistled at Bryant's wife.

In 2007, the Emmett Till Memorial Commission erected eight site-markers, including a sign at the location where Till’s badly disfigured remains were recovered from the Tallahatchie River three days after he was murdered.