Eric Burns, a former correspondent for NBC News and the TODAY Show, is the author of several history books. His latest is Someone to Watch Over Me: A Portrait of Eleanor Roosevelt and the Tortured Father Who Shaped Her Life (Pegasus Books). 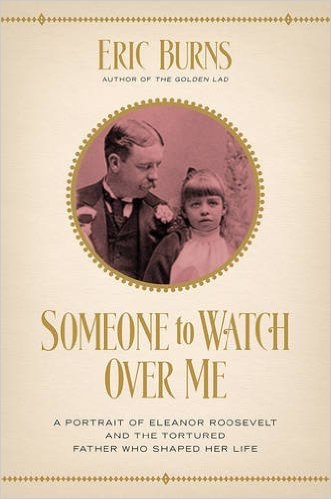 Ralph Waldo Emerson was more of a philosopher than a historian. Yet to those of us employed as the latter, he provided invaluable advice. “If a man wishes to acquaint himself with the real history of the world,” Emerson once wrote, “he must not go first to the state-house or court-room. . . It is what is done and suffered in the house, in the personal history, that has the profoundest interest for us. . . . The great facts are the near ones.”

Although the advice is invaluable, it is ignored more often than practiced, with the result that a reader sometimes feels a numbing distance between himself and the chronicle of the past that he seeks to understand. What happens in the state-house and courtroom makes history, and justly so. But it is what has previously happened, in the personal history, that makes those who make the history.

It is with this in mind that I wrote my last book, The Golden Lad: The Haunting Story of Quentin and Theodore Roosevelt. And even more so, I have followed Emerson’s guidance in a volume that will be published in March. It is Someone to Watch Over Me: A Portrait of Eleanor Roosevelt and the Tortured Father Who Shaped Her Life.

Yes, the book tells of Roosevelt’s career as an ambassador sans portfolio for her husband; of her influential meetings with world leaders like Khrushchev and Tito, the Shah of Iran and John F. Kennedy; and her inestimable service to the United Nations and the cause of human rights. But more to the point, Someone to Watch Over Me concentrates on a single question: What made Eleanor Roosevelt Eleanor Roosevelt?

The answer is startling.

More than any other person, the man who inspired the so-called “First Lady of the World” was her alcoholic, drug-addicted, demon-riddled, adulterous father, a man who once stopped into a private club for a few drinks, told Eleanor to wait for him outside, and promptly forgot about the little girl for six hours, by which time he was so drunk that he had to be carried from the club and deposited in a cab to be sent home. Eleanor followed in a separate vehicle.

She might have been but a youngster, but she knew that Elliott Roosevelt had a problem of some sort. More important, though, she also knew that he loved her, believed in her, was her most constant source of encouragement. No other man or woman, acquaintance or relative or peer, ever treated her in such a manner. Without her father, Eleanor Roosevelt would not have been Eleanor Roosevelt. The man so tortured by the fates was the little girl’s only relief from the tortures of childhood. He called her “Little Nell,” after the beautiful but lonely orphan in Dickens’s The Old Curiosity Shop.

An orphan Eleanor was not. But it is accurate to say that in many ways she had but one parent, for when she was born, her mother’s first reaction was disappointment. Her baby’s nose was too long, she thought, and her skin too wrinkled. In fact, the infant was so wrinkled that Anna Rebecca Hall Roosevelt called her daughter “Granny.” The nickname stung. And stuck; for the first few years of Eleanor’s life, she was “Granny” not only to Mrs. Roosevelt but to Mrs. Roosevelt’s friends, the empty society folk known as the “Swells.”

To Elliott Roosevelt, however, Eleanor was a “miracle.” He smiled when he first saw his newborn, and never stopped.

The child grew up quickly, and would eventually reach a height of six feet, unusual at the present time, monstrous in her own era. Her hair was plentiful, but constantly misbehaving, tumbling down the sides of her cheeks with no discernible purpose. She walked awkwardly, seeming to tumble forward more than stride, and when she was old enough to attend debutante-ridden dances, she hid herself in obscure corners, her eyes on the floor, hoping that no footsteps would approach her. Anna Roosevelt was ashamed of her. “I was always disappointing my mother,” Eleanor later said.

An unquenchable intellectual curiosity led her to seek escape from derision through literature. She would climb the trunk of her favorite tree, a cherry tree, and tuck herself into an embracing branch, secreting herself away and reading more than the rest of the Swell children put together. “Great minds discuss ideas”; she would state as an adult, “average minds discuss events; small minds discuss people.” Even in her earliest days, she strived for the former.

She did not believe she ever achieved it. But she was too hard on herself. She would write thousands of newspaper columns in her life, and great ideas abounded. Eleanor also wrote several volumes of memoirs, and

an autobiography. And she continued reading: newspapers, magazines, books. She would dazzle Khrushchev, Tito and the others not only with her erudition and accomplishments, but with her specific knowledge of the leader’s nation and its problems.

Elliott would have been proud. But it was not to be. When Eleanor was a mere eight years old, her father was banished from the family evermore. One of the household maids had charged him with impregnating her, and there was supporting evidence aplenty; the scandal had to be muzzled and the information kept from Eleanor, who seems never to have known. Or perhaps simply never acknowledged knowing. But she knew that her father’s problem—whatever it was—had gotten worse, and for that reason he was exiled from New York to a small town in Virginia.

The next two years might have been the most important period in Eleanor’s life. Seldom allowed to see her father, she wrote to him constantly. He answered her constantly, “[w]ith abiding and most tender devotion and love.” His letters cheered her on, affirming her worth, her dignity, and a beauty that others simply could not see. She could feel his warmth, the power of his belief in her, through the paper.

The story of the correspondence between father and daughter is the story of the foundation upon which Eleanor Roosevelt built one of the most admirable lives of the twentieth century. It is little-known, but it shaped a much-known career. This despite the fact that Elliott and his “miracle” exchanged messages for only two years.

When Eleanor was ten, her father drank and drugged himself to death. Ten years old—and yet she would say that Elliott was the most important person in her life, that he was with her every day of her life until it ended, that there was no man who loved her as her father did. Including Franklin. But it is not just the letters that make this tale such a touching one. It is what Eleanor did with them each night before going to sleep, without exception, for more than half a century. Somehow, the tortured man who shaped her life managed to watch over his beloved daughter long after mortality had proven too great a burden for him.