Defund and Quit the United Nations? The Campaign to Do so Has Moved into High Gear.

Human rights Edwin Black is the author of IBM and the Holocaust, and the initiator of the Covenant of the Democratic Nations effort. For his prior efforts, he has been awarded the Moral Courage Award, the Moral Compass Award, and the Justice for All Award. 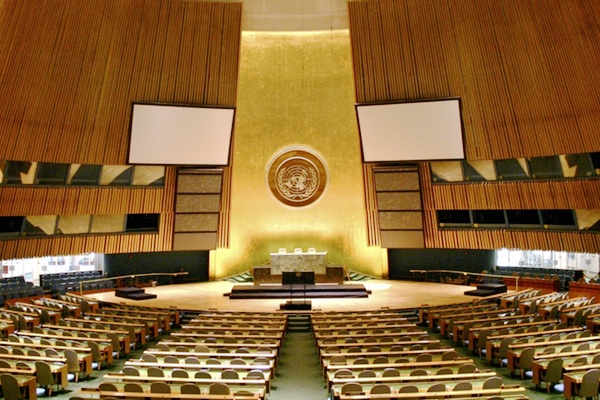 For years, foreign policy critics, politicians, and outraged members of the general public have been militating to defund and quit the United Nations. Some have advocated that a rival or successor organization be established. Now, the empty sheet of bitter discontent with the UN has been filled in with a new name, and a new movement calling to “defund and replace” troubled organization with a new world body: The Covenant of Democratic Nations. This writer has been a participating witness to the birth of this movement.

Just days after controversial UN Resolution 2334 declared, among other things, that Israel’s Jewish connection to the Western Wall was effectively illegal, to ambassadorial applause in the room, concrete replacement action began. It has started with a conversation of ideas proposing an official international conference which would carefully propound a multilaterally-signed diplomatic convention that would be ratified by countries as a binding treaty that would juridically forge the Covenant into operational reality. The entire process— fraught with hazy puzzlements over a terrain of “what ifs”—would be limited to nations governed by democratic principles. Each member would or could defund the United Nations while it labored to construct a successor entity dedicated to world peace along democratic principles with equal respect for all people regardless of religion, gender, race, identity, or national origin, as well as formulating a mechanism to resolve disputes.

A prime mission of the new world body would be to re-ratify, amend, or nullify all acts and resolutions of the United Nations and its agencies such as UNESCO. Thus, the Covenant would create a new body of long-overdue, reformed, clarified, and updated international law. Just as unjust American laws perpetrating slavery, Jim Crow, segregation, and institutional inequality were overturned, updated, and reformed during the civil rights era and right through our present decade, so too, the damage, inequity, and misuse of international law and process would be overturned by the CDN. Sensibly, most CDN nations would remain as vestigial members of the UN overseeing its collapse from economic and bureaucratic processes just as was done when the League of Nations was dissolved after World War Two and replaced with the present UN.

Clearly, the history of world bodies, fluttering high-minded banners of peace on earth following wars that scorched the world and scarred all humankind, is not a good one. The League of Nations was born after World War One out of a quest for revenge by the victors, laced with a visionary desire to end colonialism, and empower self-determination among nationally awakened peoples, so long as the whole business conquered the oil fields of the Mideast, lubricating the machinery of the post-Second Industrial Revolution West—and the multinational corporate palms that controlled it. Countries were invented that never existed, carved and chipped off the toppled Turkish and German empires, creating hand-picked kings and sovereigns who could legally sign lucrative petroleum contracts. Backstage, oil companies got the oil. But the flaccid League of Nations — which never included the United States — proved its utter uselessness during the Hitler regime.

After World War Two, the League was replaced by the United Nations. Although enshrined as a democratic enterprise, profoundly undemocratic and scheming governments penetrated by the organization from its inception. Civil war-torn China and a tyrannical and hegemonic Soviet Union, joined the other democratic allies—France, Great Britain, and the United States—to create the Security Council. Expansion, inclusion, and extension eventually enrolled 193 nations, including such egalitarian democracies as North Korea, Cuba, Venezuela, Iran, Afghanistan, Somalia, and Saudi Arabia. The world body began as a sick organ and deteriorated from there.

Understandably, some suggest that once born, the Covenant may eventually sunset its own existence after its reform work is done.

The Covenant conversation launched in earnest on January 23, 2017 when a panel of like-minded voices assembled in a crowded Gold Room of the Rayburn House Office Building. Representative Trent Franks (R-AZ,) who currently supports a bill to defund the UN, opened the Covenant Launch proceedings by declaring, “This is a critically important issue. The United Nations started out with a noble charter … but the United Nations has not only failed their charter, they have distinctly moved in the opposite direction and done actual harm … They have become an anti-American, anti-Semitic, anti-democratic, anti-freedom mob … We need some type of alternative—a Covenant of Democratic Nations … We need to repeal and replace.”

Rep. Franks was followed by panelist Ben Cohen of The Israel Project, who lamented, “You now have states that are basically glorified concentration camps … like North Korea, who get to have an equal voice with Australia, Canada, and the United States.” Ironically, said Cohen, while these other nations have full equality, one nation, Israel is the only nation whose sovereignty is “chipped away at on a daily basis.” Yet, he added, the UN did little to stop human rights calamites in Cambodia, Bosnia, Rwanda or present-day Syria. Cohen called for swift action on a new body as “the present situation is untenable.”

Panelist Kenneth Marcus, former director of the U.S, Civil Rights Commission, coined the term “Amexit,” in a newspaper column and in his panel comments. He observed, that withholding funds “for some trivial reform” was not workable. The world needed more. Marcus said the reason to form a new body was precisely because “the goals and mission of the United Nations are so important that we need to consider replacing it … If we do repeal and replace, we need to start right away … and think big.”

Sarah Stern, founder of the Endowment for Middle East Truth (EMET), pinpointed America’s 22 percent share of the overall UN budget. Stern said America was not getting what it pays for when “despotic, ruthless, tyrannical regimes” such as Syria “could pass judgment on the one democracy in the Middle East.” The UN has proven to be “abysmal.” She added, “It is now time to begin having this conversation about dissolving the United Nations and replacing with a Covenant of Democratic Nations that share our common values … of tolerance, human rights, and the rule of law.”

Famed constitutional attorney Nathan Lewin, who has worked on 28 Supreme Court cases, proclaimed to the room, “The United Nations deserves an obituary … because the United Nations committed suicide when it adopted Resolution 2334. It wrote its own death warrant … Today I am happy to join a group that would spell the end of the United Nations, the end of its funding, it presence and significance in the world order.” When asked, he wondered whether international law even functioned as “law” as we know it, since it is applied so unevenly and inequitably.

Wiesenfeld. On February 6, at Palm Beach Synagogue will host a panel featuring Langfan with Lawrence Muscant, vice president of the Foundation for the Defense of Democracies, Irving Berkowitz, dean of academic affairs Palm Beach State College, and Haim Shaked, director of Middle East Institute at the University of Miami. On February 12, a similar panel of personalities will assemble near San Francisco, the birthplace of the United Nations. Since some Australian legislators have echoed the move to defund and replace, the next session will be held in the Australian Parliament in Canberra on February 13, with similar events in Melbourne and Sydney. The whirlwind six-week tour will finish with a series of efforts in Los Angeles and San Diego. This writer will function as moderator at all these events.

In each city, many questions will be debated. For example, exactly what constitutes a democracy? CDN’s Declaration asserts: “Democratic nations can be defined many ways by many people. One definition is: a pluralistic nation with a representative electorally-based government, overseen by its own constitutional checks and balances, which protects minority rights and treats all people, both its citizens and others, regardless of race, religion, national origin, or identification, with equal justice, equal dignity, and an equal respect for human rights.”