William Lambers is an author who partnered with the UN World Food Programme on the book Ending World Hunger. His writings have been published by the New York Times, Cleveland Plain Dealer, Huffington Post, Cincinnati Enquirer, and the San Diego Union Tribune. 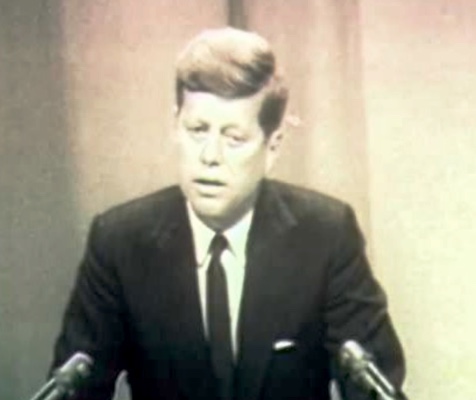 The U.S. government's global famine warning system has sounded the alarm on hunger. As a result of conflict and drought "70 million people, across 45 countries, will require emergency food assistance this year."

As the Trump administration gets underway, they are suddenly faced with a world hunger crisis that is "unprecedented in recent decades." How will they respond to the biggest foreign policy emergency of their first year?

It’s simple. Follow JFK's example. President John F. Kennedy made feeding the hungry a priority from day one of his administration.

Right out of the starter's gate Kennedy ordered the Secretary of Agriculture "to expand and improve the program of food distribution throughout the United States...to all needy families a greater variety and quantity of food out of our agricultural abundance."

Then JFK went on to launch a heroic relief effort to stop a famine in the Republic of the Congo. On Jan 25, 1961 Kennedy did his first press conference, which was also the first one ever televised live.

Kennedy ordered cornmeal, milk, rice and other life-saving supplies to be airlifted to the Congo. The United States was going to support the United Nations mission to rescue people from starvation. The U.S. military was essential for its logistical support.

Feeding stations became operational in the famine zone. Children, once at risk of starvation, were saved and regained health.

Kennedy made fighting world hunger a central part of his strategy for peace, a standard for all the presidents who have followed. JFK said "world opinion must be concentrated upon the international effort to eliminate hunger as a primary task of this generation... and world peace and progress cannot be maintained in a world half fed and half hungry."

As Donald Trump assumes the presidency we need to him to continue the hunger fighting tradition, especially now with the famine warnings issued.

There are numerous conflicts around the globe with millions of displaced and hungry persons. The famine warning states "persistent conflict is disrupting livelihoods, limiting trade, and restricting humanitarian access across many regions, including the Lake Chad Basin, the Central African Republic, Sudan, South Sudan, the Great Lakes Region, Somalia, Yemen, Ukraine, Syria, Iraq, and Afghanistan."

United States leadership is desperately needed to save these innocent war victims from starvation.

The wars in Syria and Iraq stand out as humanitarian emergencies where food supplies are desperately needed. Will the United States do its role to save millions of innocent Iraqis and Syrians from starvation?

The United States Food for Peace program, for example, makes critical donations to agencies like the UN World Food Programme, Catholic Relief Services and others who are on the front lines of these hunger emergencies. The United States must continue to support these efforts. That is where the Trump administration and the Congress have to do their part, especially when it comes to budget priorities.

Sadly, the World Food Programme has reported major funding shortages for operations including the war-torn Central African Republic. South Sudan and Yemen also are hunger crisis areas where resources are needed right away.

In other countries drought and natural disasters have caused high levels of hunger. Haiti continues to require support in the aftermath of Hurricane Matthew.

The Trump administration must lead a coordinated effort to feed the hungry in these nations, the essential building block for peace.

Kennedy realized this. He had an aggressive Food for Peace director in George McGovern. This humanitarian hero helped make hunger relief a top priority, including the creation of the World Food Programme.

McGovern, with Kennedy's support, made school lunches a consistent aspect of U.S. foreign policy at that time. We should build upon his example.

In fact, a program named after McGovern and fellow senator Bob Dole, provides school lunches across the globe. It's a small program compared to what was done during the Kennedy administration. We can do more and do it better. Again, that is where Trump administration and Congress can take action.

JFK and other presidents have recognized that world peace and stability rest up on food supplies for every nation. Trump should too and feed the hungry while building peace.