Eric Hinderaker is professor of history at the University of Utah and the author of Boston’s Massacre (Harvard University Press, 2017). 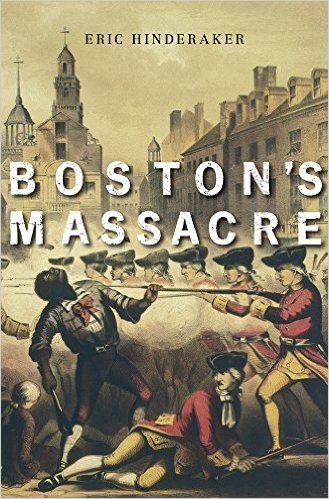 Today, 247 years after it occurred, most Americans have only the dimmest sense of what happened in the Boston Massacre. But two names are indelibly associated with it: John Adams and Crispus Attucks. Adams, Boston’s most famous revolutionary, defended the soldiers before the bar in a high-profile trial (it serves as the centerpiece of the first episode of the HBO miniseries based on David McCullough’s biography of Adams). Attucks, a sailor of mixed Wampanoag and African American heritage, is the best known of the massacre’s victims—for most people, in fact, the only identifiable name on the list. Widely remembered as the first African American martyr of the American Revolution, Attucks is commonly presented today as a patriot hero in children’s literature and textbooks.

It was not always that way. At the time of the shootings, Adams was an ambitious lawyer on the rise—confident yet insecure, looking for work that would allow him to cut a memorable figure. Attucks was so anonymous in the town where he died that he was initially misidentified; the coroner’s report called him Michael Johnson. Contemporary documents referred to him simply as “the mulatto.”

The shootings occurred at a low moment in Boston’s history. Afraid of the town’s rebellious inclinations, in the fall of 1768 British officials stationed four regiments and an artillery detachment in Boston to keep watch and intimidate local leaders. Two of the regiments and the artillery detachment left town the following summer, but the 14th and the 29th remained indefinitely. Many soldiers and officers made lives for themselves in Boston, but their presence grated on local sensibilities. By the time a violent confrontation between troops and townspeople culminated in gunfire on the night of March 5, 1770, no attentive observer could have been surprised.

There was, however, considerable disagreement about what actually happened. Did the soldiers fire according to a predetermined plan, and did their commanding officer, Captain Thomas Preston, order them to do so? Or was the crowd so large and threatening that the soldiers had to fire in self-defense? Boston leaders steadfastly maintained the former; Preston, the soldiers, and their defenders insisted the latter. The trials of Preston and his men would turn on these questions. First in the trial of Preston to determine whether he gave the order to fire, and then in the subsequent trial of Preston’s soldiers, prosecutors condemned the soldiers’ actions while Adams and the rest of the defense team argued that Preston gave no order and his men had no choice.

Adams walked a fine line in making his case for the soldiers. He wanted to exonerate them without bad-mouthing his adopted town. To pursue this strategy, a scapegoat was useful: that is where Crispus Attucks came in. In his closing argument, Adams seized on the testimony of a single witness to argue that Attucks was to blame for the shootings. A dark-skinned sailor and casual laborer, Attucks was a useful symbol of the outside agitators whom Adams wanted to blame for the riot. The violence was instigated, he argued, not by ordinary townspeople but by “a motley rabble of saucy boys, negroes and molattoes, Irish teagues and out landish jack tarrs.” And Attucks was the ringleader.

To make his case, Adams ignored the testimony of numerous witnesses who described the scene in detail, and either failed to notice Attucks before he was shot or recalled that he was a passive bystander. Instead, Adams focused on the account of Andrew, a young slave owned by Oliver Wendell, who claimed that he saw Attucks rush forward, grab a musket by the bayonet, and club a soldier over the head before he was shot dead. Robert Treat Paine, a lawyer for the prosecution, scoffed at Andrew’s account. “Unless all the other Witnesses were stone-blind,” he contended, this detail did not exist anywhere except in Andrew’s “own brain.” Adams, however, set skepticism aside. The story of Attucks’s aggression was just the detail he needed to defend the soldiers and protect Boston’s reputation at the same time—because Attucks was no Bostonian. Set upon by a “stout Molatto fellow, whose very looks, was enough to terrify any person, what had not the soldiers then to fear?” he asked the jury. Adams placed responsibility on Attucks alone, “to whose mad behavior in all probability, the dreadful carnage of that night, is chiefly to be ascribed.”

The Boston Massacre served as a touchstone of patriot identity during the years of warfare with Great Britain, and the trials helped to establish Adams’s reputation as a lawyer. But Attucks was quickly forgotten. For almost 70 years, the name was rarely uttered. But around 1840, black activists in Boston laid claim to Crispus Attucks as an African American patriot who was the first man to die for American independence. William Cooper Nell, an African American abolitionist who grew up in Boston and trained as a printer under William Lloyd Garrison, was Attucks’s foremost champion. For Nell and other black activists of the 1840s, Attucks was not an outlandish thug, as Adams had characterized him. He was the leader of a patriot vanguard. After a lengthy campaign, a monument was erected on the Boston Common to commemorate Attucks and the other victims. In the twentieth century, schools, community centers, and other institutions were named for Crispus Attucks, and he became an important symbol of the African American presence in early America.

Today, our memories of John Adams and Crispus Attucks are largely unconnected to each other. Adams, champion of independence and second president of the United States, occupies an honored place in American history. His writings are voluminous, his family famous, his memory secure. Crispus Attucks is recalled in a different register. The facts of his life are barely known. But he represents the experiences of ordinary people in a way that exclusive attention to men like John Adams can all too easily obscure. An escaped slave, a mariner, a laborer, a man without a secure place in Boston or any other community: the story of Crispus Attucks illuminates, however dimly, the forgotten lives of countless humble men and women who toiled and died anonymously. Attucks, too, would likely have been forgotten, if not for the decision of a young lawyer to make him an antihero in the story of a riot gone wrong. It is thanks to the creative genius of William Cooper Nell and his contemporaries that Attucks has come to be remembered as something else: a symbol of American identity in all its richness and ambiguity.