Steven Knipp is a journalist. 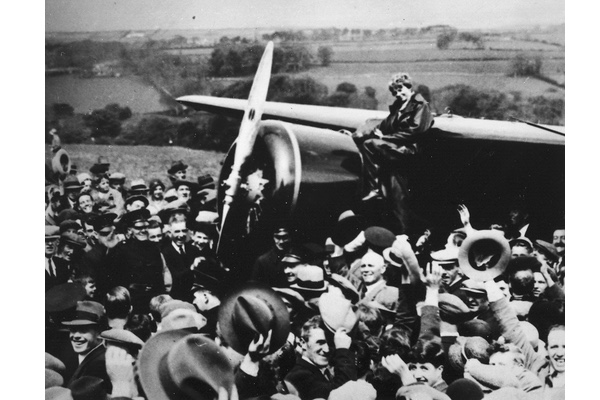 In 1932, the daring flyer Amelia Earhart became the first woman pilot to cross the Atlantic. She took off from Newfoundland, Canada, intending to land in Paris, as Charles Lindberg had done four years before. But she encountered bad weather and engine problems, so she landed in Northern Ireland, near the town of Derry.

Climbing down out of her small red-painted monoplane after flying non-stop for 15 hours, and not certain where in Ireland she had landed, Earhart asked an approaching farmer where she was.

"Ah, you’re in Gallagher’s field!" the man, Robert Gallagher, is said to have replied nonchalantly.

For generations the people of Northern Ireland have taken their long ties to America not so much as important, as utterly for granted. But few Americans know just how closely linked America has always been with the British-governed enclave.

When the Revolutionary War began, probably half of George Washington’s troops were of Northern Irish extraction. And, as America expanded westward, its most famous frontiersmen - Davy Crockett, Daniel Boone, Kit Carson, Jim Bowie - were all Northern Ireland’s sons. Two of the Civil War’s most famous generals, Ulysses Grant and Stonewall Jackson were both descendants of Northern Irish immigrants. Mark Twain’s dad and mom hailed from Northern Ireland, as did ancestors of Neil Armstrong and John Glenn.

Years of bad press about the IRA always made Northern Ireland a hard sell for American tourists. Yet in actual fact, more people are killed there in traffic accidents than were ever done in by the infamous “Troubles,” the almost polite term for the three decades of sectarian fighting between Catholics and Protestants.

The worst years of the Troubles kept much American investment out of Northern Ireland and so the province has missed out on many of the so-called benefits of globalization. (McDonald’s came to Moscow long before it reached Belfast.)

Yet for all that, Northern Ireland is one of the few places in the world where there still remains a large reservoir of genuine affection for Americans.

In the 20-minute cab ride from Belfast City Airport to my hotel a few years ago, my driver asked the purpose of my visit. I proudly told him that my grandmother and grandfather had emigrated from the province nearly a century ago, and that I hoped to visit her cottage. At this he laughed good-naturedly and said: “Ah, it seems that every facking Yank has a granny from these parts. Good luck to you in finding just which granny’s house is yours!”

One favorite destination of mine is the charming riverside town of Derry, or Londonderry, as its Protestant residents prefer to call it. The beguiling old Irish ballad “Derry Air” (better known as “Danny Boy”) was written here.

It was in Derry, while reporting on the Troubles, that I met John Hume.

A living legend in Northern Ireland, beloved by both the Catholic and Protestant communities, Hume was awarded the Noble Peace Prize in 1998 for his lifelong efforts to bring peace to Ireland. He fondly recalled for me his early memories as a small boy, of being taught how to play baseball by US Marines stationed in Derry.

“Many of those same boys were later sent on to Belgium in December 1945,” he told me, “and were chewed up in the terrible fighting during the Battle of the Bulge.”

In the 18th century, thousands of Irish left Derry to seek their fortunes in the United States – as had the family of the famous Irish American Democratic Speaker of the House – Robert “Tip” O’Neill.

John Hume had become a great friend of O’Neill. Over many years, in his role as a powerful liberal American political figure, O’Neill had worked with fellow Irish-Americans Teddy Kennedy and Senator Daniel Patrick Moynihan to press presidents Jimmy Carter and Ronald Reagan to pressure the British Government to lend greater support to the peace process between Catholics and Protestants. Forty years ago this month, their “St. Patrick’s Day declaration” began the process to finally end the violence that had seen thousands killed in Northern Ireland.

Hume told me the story of how, to thank Tip O’Neill for his service to the people of Northern Ireland, he personally spent many weekends secretly searching for the original homestead of the O’Neill family.

Then, finally on one of O’Neill’s last visits to Derry, Hume told his American friend to get into his car, as they were going for a drive.

After an hour’s journey through scenic Donegal, Hume asked O’Neill to put on a blindfold, as he had a surprise for him.

After several minutes more driving, Hume then stopped the car high on a windy cliff above the grey Atlantic. He helped O’Neill out of the car, and asked him remove the blindfold.

There, standing before House Speaker O’Neill was an old white-washed stone cottage, as picturesque as anything on a post card.

Hume then let O’Neill know that this very cottage was the birthplace of his grandmother, Eunice (Unity) Fullerton.