Why Was the Quebec Flag Flown at the Statehouse in Connecticut?

Patrick Lacroix, Ph.D., is a former instructor of the University of New Hampshire. His work on Franco-American history has notably appeared in the Catholic Historical Review and the Journal of the Gilded Age and Progressive Era. 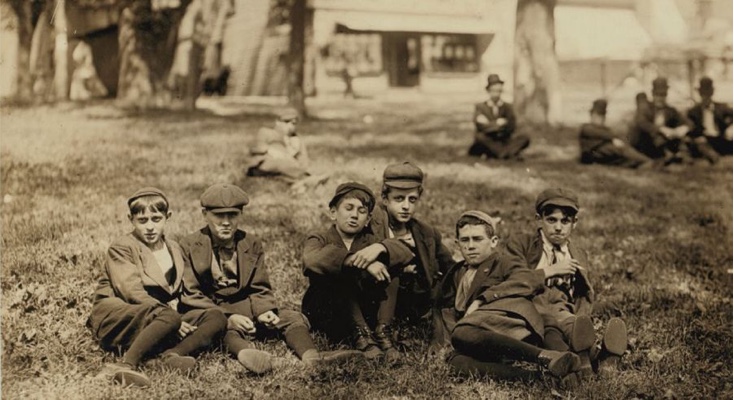 Some of the nearly one million immigrants from Québec who migrated to New England between 1840 and 1930.

In June, unbeknownst to most of their fellow citizens, thousands gathered across New England in celebration of their French-Canadian heritage. Festivities attended by government officials were held in traditional centers of Franco-American population like Lewiston (Me.), Lowell (Mass.), Manchester (N.H.), Winooski (Vt.), and Woonsocket (R.I.). The Quebec flag even flew at the State Capitol in Hartford (Conn.).

The festivities of St. John’s Day, or more appropriately la Saint-Jean-Baptiste, Quebec’s national day, were imported to the northeastern United States by nineteenth-century immigrants. From approximately 1840 to 1930, 900,000 French Canadians settled in the United States. A large proportion—men, women, and children—found work in New England’s textile industry. In manufacturing cities across the Northeast, these immigrants established “Little Canadas,” ethnic neighborhoods anchored by the local Catholic Church.

Since the Second World War, the meaning of the June 24 holiday has evolved significantly in Quebec. It also taken a new significance south of the international border. La Saint-Jean was once a predominantly religious affair that provided an opportunity to warn of the danger of assimilation among Franco-Americans, lest they lose their ancestral faith and language. In the twenty-first century, the holiday appears under a different guise—on which U.S. political leaders have been eager to capitalize.

For generations, “Francos” were confined to an unenviable place in American society. Outside of their urban enclaves, the migrants from Quebec and their American-born descendants faced marginalization and discrimination for their ancestral language, faith, and customs. This is unexceptional from the standpoint of U.S. ethnic history, with the difference that this specific group did not subsequently achieve the level of social and historical visibility of other groups.

Nor were their customs reinterpreted and celebrated by mainstream American culture, as with the Irish and Italians. Though French Canadians crossed the border by the hundreds of thousands, public recognition of the fait français in the United States was until recently almost inexistent.

A new era is upon us. In state capitals around New England, a quiet revolution has occurred. At one time, legislatures passed measures to halt minority groups’ access to political influence and to preserve the cultural character of their jurisdictions. Now, those seats of power have come to view immigration and cultural diversity as assets—nativism full speed in reverse. Franco-Americans are having their day in the sun.

Numerous states now formally celebrate Francophonie month. In March, this year, flag-raising ceremonies with formal proclamations, with state officials in attendance, were held in Rhode Island and northern New England. The Quebec Government Office and the French Consulate in Boston have supported these and many other events. They also sponsor French-language educational projects and aid community initiatives, although Franco-American organizations in Manchester and Lewiston, for instance, continue to hold activities year-round and thrive thanks to grassroots involvement.

Several months later, public recognition of la Saint-Jean was accompanied by the visit of three ministers of Quebec’s provincial government to the United States to cement ties and promote common cultural, environmental, and economic opportunities.

This revival of interest is not accidental—nor is it the sole doing of Franco-Americans or of those who study them. It comes as the U.S. Northeast is experiencing a “Quebec moment.” Governors, state legislators, and congressional delegations are increasingly seeking economic partnerships north of the international boundary.

Vermont attracts 700,000 Quebeckers annually, while thousands more visit the beaches of Old Orchard, Ogunquit, and York in Maine. But trade is as crucial as tourism. Canadian and U.S. policymakers are discussing improved transportation corridors between Burlington and Montreal and between Portland and Quebec City. In New Hampshire, the northern town of Berlin recently attracted a Quebec manufacturer by virtue of its French heritage, while the controversial “Northern Pass” has highlighted the energy ties between the state and its neighbor. Other New England states are also envisioning more extensive commerce across the border.

Thus it is no surprise that Governor Paul LePage spoke at a meeting of the American Council of Quebec Studies (ACQS) in Maine last fall—or that newly-elected governors Phil Scott of Vermont and Chris Sununu of New Hampshire travelled to Quebec this winter to meet with Premier Philippe Couillard.

But there is more to this Quebec moment. Policymakers in New England have discovered in Franco-Americans a new political utility in the age of Trump. Before members of the ACQS, attorney and retired legislator Severin Beliveau made connections between the historical treatment of French-heritage people on American soil and recent nativist outbursts. “Now it is Muslims,” Beliveau stated. “In the ’20s, it was the Francos. Now it is Hispanics.”

At a conference titled “French Connections” held in Burlington in March, Governor Scott firmly asserted that “[d]iversity makes us stronger.” The state’s young attorney general, T. J. Donovan, cited Franco-American history in an impassioned challenge to the Trump Administration’s proposed travel ban. “[W]e all come from somewhere else,” Donovan declared. “[I]t is [the] shared purpose of this country to be inclusive, to be compassionate, to be merciful.” Now policymakers must ensure that “we will open our doors as we always have for those who seek a better life here, as it was true for the French Canadians let it be true for the Syrians. This is the story of our state, this is the story of our country.”

In a few strokes, New England’s political class has done for Franco-Americans what activists and scholars have labored to do for years—to assert their significance to U.S. history and culture. At the same time, the current political conjuncture and an influx of funds from government offices present a golden opportunity, if recognized, to make connections between past and present and to speak to power.

On June 24, Franco-Americans remembered their struggle for cultural survival when politicians stoked nativist impulses. Unbeknownst to many who attended, their festivities, like much of our historical consciousness, are still a function of political interest—and in that, there may be, as in prior times, little cause to celebrate.