Robert Brent Toplin is Professor Emeritus at the University of North Carolina, Wilmington. Toplin was also professor at Denison University and recently has taught occasional courses at the University of Virginia. He is the author of several books about film, history, and politics and has commented on history in several nationally broadcast radio and television programs. Contact: Rt2b@virginia.edu. 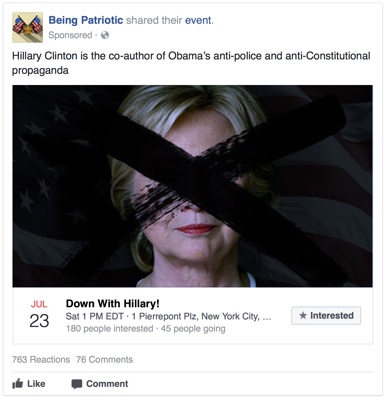 Many Americans are unhappy about President Donald Trump’s decisions, but defenders of his administration dismiss these criticisms as irrelevant. Elections have consequences, they argue. Trump promised to change Washington when he was on the campaign trail. Voters liked what he said, and now the President is delivering on those promises. Get over it, critics. Trump won. Clinton lost.

This argument in defense of Trump’s leadership sounded more compelling immediately after the election than it does now. New evidence has surfaced in recent months that suggests Trump may not have won the 2016 race primarily because he offered voters a more appealing message than the Democratic candidate. The Kremlin backed numerous communications on Facebook, Twitter, Instagram and YouTube that boosted Donald Trump’s campaign with words and images that damaged Hillary Clinton’s candidacy. Russian agents appreciated a condition of modern-day electioneering that many politicians, journalists, and citizens in the United States fail to recognize adequately when assessing the results of presidential elections. Russia’s meddlers understood that voters are not simply influenced by the good works a candidate promises to perform. Voters’ decisions are influenced to a considerable degree by strongly negative impressions they have about an opposing candidate’s personality, behavior, and ideas.

In the light of newly released details about Russia’s manipulation of the Internet, pundits who seek “lessons” from the 2016 presidential election should question some of their favored interpretations. When trying to explain why Trump won a very close election, they typically cite the Republican candidate’s promises to “Make America Great Again” and create “good jobs,” his nostalgic references to America’s past, his image as a successful businessman and Washington outsider, and his appeals to ordinary Americans, including white men. They point out, as well, that Hillary Clinton was not an ideal candidate. She lacked the political charisma of her husband. Mrs. Clinton also failed to heed the message that James Carville emphasized during her husband’s successful 1992 campaign – Americans care about “the economy, stupid.”

Trump’s messaging and Clinton’s shortcomings were factors in the outcome, of course. Nevertheless, Mrs. Clinton attracted almost three million more votes than Trump, and her loss can be traced largely to Trump’s victories in Pennsylvania, Michigan, and Wisconsin by a combined total of less than 80,000 votes. Absent Russia’s abundant messages spreading across the Internet, Hillary Clinton would likely be handling the nation’s affairs now in the Oval Office.

The reach of that foreign-based propaganda was impressive. The Internet Research Agency, an organization linked to the Kremlin, reached 126 million users of Facebook. Many of its communications aimed to undermine confidence in Hillary Clinton. Russian agents published more than 1.4 million election-related tweets. Those messages received 288 million views. Russia’s intervention resulted in the publication of more than 120,000 images on Instagram, the photo-sharing platform, and it produced more than 1000 ads on YouTube. Americans who liked these messages passed them on to friends. Agents associated with the Kremlin exploited Internet freedom brilliantly during America’s 2016 election campaign. The Internet remained a free-wheeling, largely unregulated communications network. It did not require sponsors of political messages to identify themselves, as television advertising required.

We should not be surprised that Russians sought to boost Trump’s chances principally by circulating negative impressions of Hillary Clinton rather than positive judgments about Donald Trump. In recent decades, American campaign advertising has accentuated the negative rather than the positive. Strategists recognized that efforts to demonize the opposition can pay off handsomely. The negative approach has been especially evident since the 1988 presidential race. This was not a new trend, of course. The 1800 presidential campaigns involving Thomas Jefferson and John Adams featured plenty of nasty personal attacks, and similar practices affected later presidential contests. Since 1988, though, both major parties put this strategy on steroids.

Republican leaders were nervous in late May of 1988. Democrat Michael Dukakis was far ahead of the President George H. W. Bush in the polls. GOP strategists decided to respond with hard-hitting attack ads against the Democratic candidate. They branded Dukakis as a Massachusetts “liberal” and portrayed him as weak on national defense. “Willie Horton” ads also wrecked Dukakis’s image. They drew attention to a Massachusetts furlough program that allowed the temporary release of state prisoners. Horton, an African American and convicted murderer, committed assault, armed robbery and rape at the time of his furlough. Michael Dukakis made numerous mistakes, but the GOP’s powerful assault on his character and leadership hurt even more. George H. W. Bush overcame Dukakis’s initial advantages, winning the electoral college by a whopping count of 426 to 111. President Bush’s turnaround in the 1988 contest delivered a poignant message. Efforts to promote frightening characterizations of the opposing candidate can make an impact on voters’ opinions.

Negative advertising helped Republicans in the close presidential contest of 2004. Democrats seemed to have a good chance for victory when they nominated John Kerry, an articulate, rugged-looking, war veteran who received a Silver Star, a Bronze Star with Combat V and Three Purple Hearts for military service in Vietnam. But Kerry went down to defeat, in large part because of the way Republican strategists portrayed him – as a tax-raising, flip-flopping wimp. An attack group finished off the wounded Kerry by claiming that he lied about his achievements in Vietnam.

Democrats gained leverage in 1992 and 2012 by employing attack strategies. In 1992, Bill Clinton’s campaign suggested President George H. W. Bush was out of touch with ordinary people. Democrats blamed President Bush for the hard times Americans experienced during a recession. In 2012 Barack Obama’s team quickly defined the character of Mitt Romney for voters before Romney had a chance to make his case. Democrats portrayed Romney as an aloof millionaire who did not truly care about average people. Romney viewed corporations as “people,” Democrats stressed, and they drew attention to Romney’s video-recorded claim that 47% of American voters “are dependent on the government” and “believe the government has a responsibility to care for them.”

It is difficult for political analysts and citizens to revise their familiar narrative about lessons drawn from political campaigns, including their conclusions about the 2016 election. When discussing the reasons for victory or defeat, they give primary weight to the appeal of individual personalities and the candidates’ promises to improve voters’ lives. Commentators stress the importance of a candidate’s likeability and communication skills. But the latest evidence of extensive meddling through Facebook, Twitter, Instagram, and YouTube suggests that analysts need to think differently when assessing election results in the years to come. The winning candidate’s personality and message do not always establish the winning margin. Quite often, negative characterizations serve as keys to victory.

Debates about the reasons for Trump’s win and Clinton’s loss will continue to animate conversations for a long time, but new evidence supports an astonishing judgment. Hillary Clinton probably would have won – in fact, she might have won handily and benefited the candidacy of Democrats for the House and Senate – if Russian interference had not created strong doubts about her character and competence.