Paul Ham is a historian and the author of Hiroshima Nagasaki: The Real Story of the Atomic Bombings and Their Aftermath (Macmillan Publishers). 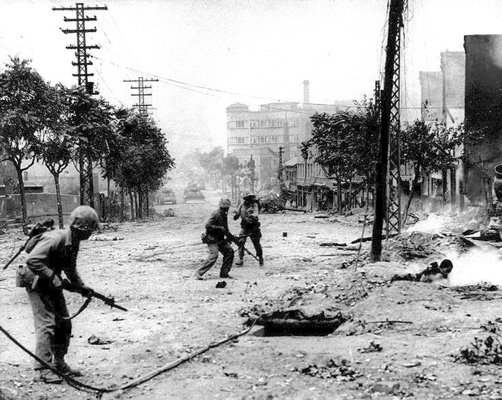 Combat in the streets of Seoul

“DEHUMANIZE A BELT across the Korean Peninsula by surface radiological contamination ... broadcast the fact to the enemy, with ample and particular notice that entrance into the belt would mean certain death or slow deformity to all foot soldiers; that all vehicles, weapons, food, apparel entering the belt would become poisoned with radioactivity, and, further, that the belt would be regularly recontaminated until such time as a satisfactory solution to the whole Korean problem shall have been reached. This … would be, I believe, morally justifiable under the circumstances.” 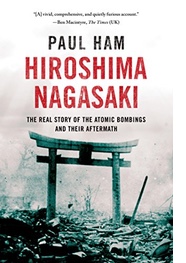 No, it’s not an exclusive extract from the Trump Administration’s plan for nuclear war in North Korea. It’s the advice of Democratic Senator Al Gore Sr, father of the future Vice President and environmental campaigner, to President Truman in 1951 at the height of the Korean War.

The horror of the Korean “meat grinder” moved Gore to propose a “cataclysmic” atomic intervention. Having served on a committee overseeing the Atomic Energy Commission, Gore claimed to have a special understanding of the consequences of his recommendation. The “tragic situation” in Korea, he wrote, “demands some dramatic and climactic use of some of these immense weapons.” Any attack on American-occupied Japan would justify the use of the atomic bomb, he added.

Gore was one of many great and good Christian Americans urging Truman to unleash nuclear mayhem on the Korean Peninsula. The Korean War, a UN-mandated conflict waged between the South (with the support of her American, British, Australian and other allies) and the North (backed by China and the Soviet Union) was the first test of America’s willingness to use nuclear weapons in anger since the bombing of Hiroshima and Nagasaki.

Yet the memory of Hiroshima and Nagasaki exerted a curious effect on Truman. The president, who had approved the devastation of the Japanese cities six years earlier, resisted overwhelming pressure from General Douglas MacArthur, church leaders and a slim majority of Americans (at least in the early stages of the war), to drop nuclear bombs on North Korea.

A similar proportion of Republicans are today urging Trump to use nuclear weapons against North Korea, should diplomatic solutions fail. Yet unlike Trump, Truman grasped the moral and political distinction between the use of conventional and nuclear bombs. He understandably sought to avoid nuclear Armageddon between America and the communist bloc, with the loss of millions of lives.

That distinction eluded most Americans in the early 1950s, including many ferociously anti-communist church leaders and their parishioners who were among the loudest exponents of a nuclear solution to the Korean War. Such people had much bigger game in mind, seeing in a neutron-saturated dawn over Pyongyang the harbinger of the destruction of Soviet Russia:

“Your Excellency,” the Reverend Kenneth Eyler, of the Wesleyan Methodist Church of East Michigan, wrote the President: “As a minister of the Gospel and a Bible-believing Christian ... there is much that has been bothering me lately. This war in Korea. Why is it we fuss around at the fringe instead of getting at the heart of the matter? ... You know as well as I do where this whole matter lies. That is in MOSCOW. I would rather see Moscow destroyed than our boys die in Korea at the hands of the Chinese Red ... You can use the Atom bomb. Don’t pay attention to these liberal and modernist preachers.”

Albert Sheldon, associate director of the God’s Way Foundation (whose letterhead listed “God” as its director), saw fit to advise Truman: “If and when you decide it is necessary to use atomic bombs, we hope and pray that they will be dropped first of all on Moscow ... Please, please, do not allow any atomic bombs to be dropped on Chinese territory ... until we have done our best to knock Russia cold.”

A great many ordinary people similarly urged the President to use the bomb, reflecting a widely held view that “we’ve got the nukes, so we ought to use them.” Pawnshop owner W.D. Westbrook, who used to buy mules from Truman’s father, pleaded “for all our sakes Harry,” drop the bomb: “Your one bomb stopped the Japs. Several will end it all, all over the world. The world is waiting.”

But the loudest call for nuking the North came from General Douglas MacArthur, forced into a corner of South Korea in late 1950 by his strategic impetuosity in ignoring the threat of the Chinese. He implored Truman to approve the use of as many as 50 nuclear weapons on Chinese positions in Manchuria, to thwart their massed attacks on his positions. At the time the general enjoyed huge public support.

“I could have won the war in Korea in a maximum of 10 days,” MacArthur later boasted. “I would have dropped between 30 and 50 atomic bombs on [enemy] air bases and other depots strung across the neck of Manchuria.” He intended just as Gore recommended, “to spread behind us – from the Sea of Japan to the Yellow Sea – a belt of radioactive cobalt. It could have been spread from wagons, carts, trucks and planes.... For at least 60 years there could have been no land invasion of Korea from the north. The enemy could not have marched across that radiated belt.”

At the other extreme were many American people who failed to see the hand of God in the creation of a radioactive wasteland on the Korean Peninsula. Clara Bergamini, who lost her son on Guam, wrote to Truman:

“I and my whole family are appalled at this talk in government circles about whether or not we should use the atom bomb on our foes in Korea. We should not have used the hideous weapon in Japan, and believe me, the crime we perpetrated on helpless non-combatants there will inevitably have to be paid for by us.

“My husband and I with two children were interned for these years by the Japanese, in the Philippines, and we lost everything we owned, including our eldest son, who was killed with the marine assault on Guam. We would rather go through all that again, and lose our only surviving son, than turn loose this atomic horror on anyone.”

Restraint proved the better part of valor. Truman refused to approve the use of nuclear weapons on North Korea, defying MacArthur’s plea. The decision reflected Truman’s avowal since 1948 that nuclear weapons should remain in civilian custody, and not be handed over to military control because, as he told a meeting at the Pentagon on July 21 that year, nuclear bombs were not “normal” weapons: "You have got to understand," the president told the top brass, "that this isn't a military weapon …. It is used to wipe out women and children and unarmed people, and not for military uses. So we have got to treat this differently from rifles and cannon and ordinary things like that."

The President’s gravest concern during the Korean War had been to avoid a global nuclear confrontation with Soviet Union, which backed North Korea, and to limit the proliferation of nuclear weapons in Asia.

(Henry Kissinger, Secretary of State in the Nixon administration, later rammed that message home. By threatening to withdraw US forces completely from the Korean Peninsula, Kissinger stopped the South Koreans from building a bomb.)

Truman’s restraint notwithstanding, the Korean War supercharged America’s domestic atomic program. By the mid-1950s the Cold War had exceeded the projections of mutually assured destruction; America and the Soviet Union were now building nuclear arsenals powerful enough to annihilate each other several times over.

In 1955, the US Strategic Air Command calmly contemplated destroying 75 per cent of the population of 118 Russian cities, in a pre-emptive nuclear strike in which total Soviet fatalities were expected to exceed 60 million. “The final impression,” remarked a shocked witness at one briefing, “was that virtually all of Russia would be nothing but a smoking, radiating ruin at the end of two hours.” These were no longer the scenarios of military planners; they were seen as likelihoods.

Whether America applied these scenarios for nuclear war in subsequent years would depend on the character and sanity of future American presidents, chiefly their ability to negotiate the fraught political and diplomatic pressures of office in the interests not only of Americans but of us all. In 1962 President Kennedy followed Truman’s example and showed transcendent vision in avoiding nuclear war over Soviet missiles in Cuba. In a very real sense, then, the fate of the earth rests on the character of the president in charge. Had there been a Trump or Goldwater in the White House during the Korean War or the Cuban missile crisis it is hard to imagine that the world would have avoided a nuclear catastrophe with millions of fatalities.